The winter of 2014-15 was something of a disappointment for those of us living in the Mountain West.  Temperatures were warm.  Precipitation was scarce, and often fell in the form of rain instead of snow.  Here in Utah, the ice climbing season was short and inconsistent.   As a result, I only got out for a couple of days locally, and took a couple of trips down to Ouray, which also was suffering through a relatively warm winter.

I did get to try out some new ice screws by Salewa, and also got to use my aluminum Petzl Speed Light screws a bit more.  Here are my impressions:

The Salewa Quick Screw is a screw that incorporates a number of interesting features.  It has a compact head with a fold out crank.  The head is some sort of composite that supposedly makes the screw less prone to melting out when placed in direct sunlight.  The most unusual feature of the Salewa Quck Screw is that it comes with an integral racking system.  The screw is permanently attached to a quick draw via a sliding hanger, and the quick draw attaches to the screw by means of a plastic clip.  This makes them very easy to carry.  There is no need for racking on a separate biner, caritool, etc.   Biners and screws are color coded by length. 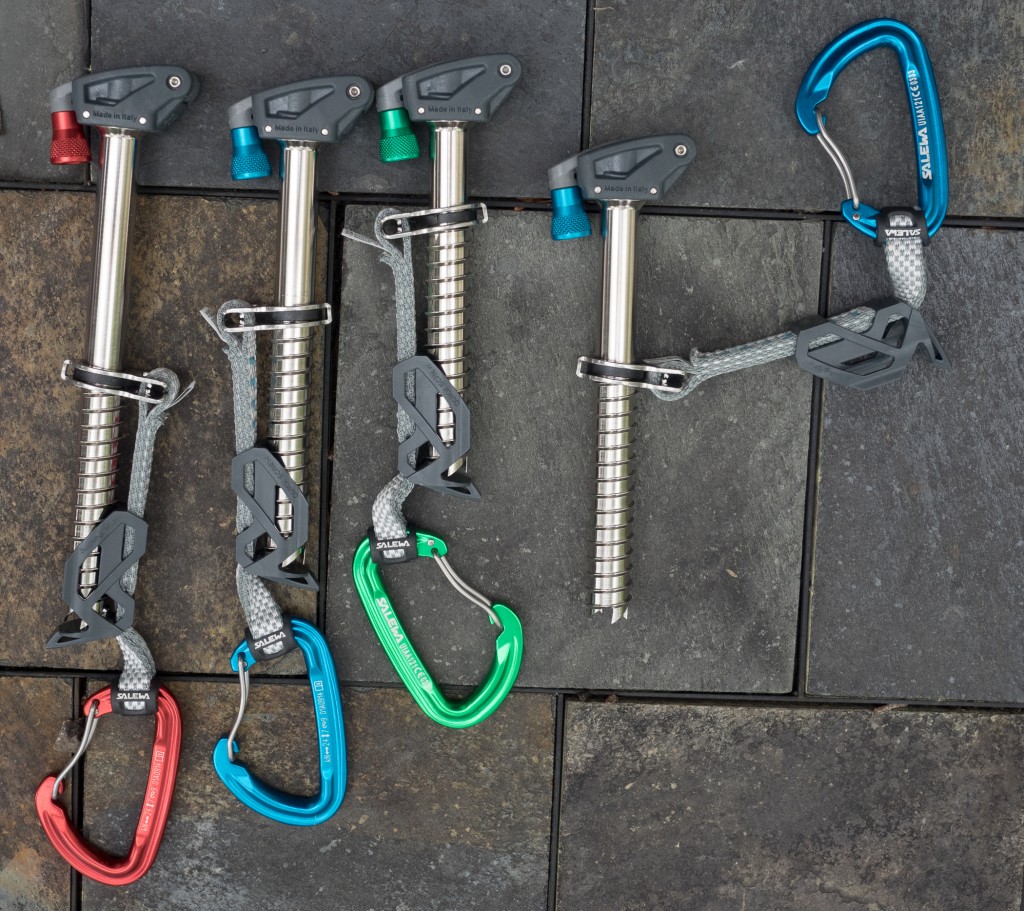 The racking system is very convenient, however, it does require a few extra steps when placing the screw one-handed on steep ice.  Here is the sequence:

2:  Work your hand up the screw until you are grasping the head and the carabiner is hanging down.  Then, whack the screw up against the ice to break the grip of the plastic carrier and release the screw body.

3:  Press  the teeth into the ice and start turning it in.  When the teeth catch, you deploy the crank handle and crank it in.

4:  Clip your rope into the biner, and you’re good.

Once you are grabbing the head, the screw goes in very nicely.  It bites as well as any other screw I’ve used, and the shape of the head makes it very easy to get pressure on the screw when you’re starting it.

I bought 4 of the Salewa screws, and after using them a bit, I want more.  They are easy to place, and easy to access when they are clipped on your harness.  After some initial practice, I can deploy, place, and clip these screws faster than any other.

The only real downside to these screws is that they are expensive and (in the US at least) hard to find.

After using them climbing water ice this winter, my first impressions have been mostly confirmed.   I love the light weight, and their aggressive teeth make starting them very very easy.  Although I bought them primarily as a light weight alpine ice screw, I find that I’m using them as a go-to all around water ice screw as well.

However, the binding issues I encountered when I first used the screws have continued to occur.  These screws tend to freeze into the ice when placing them in temperatures near freezing.  Colder temperatures seem to result in less freezing/binding.  I have seen other people posting on the internet with similar experiences, so my conclusion is that this is not my imagination, but is something inherent in the aluminum design (probably related to aluminum’s conductivity.)

The bottom line, however, is that the binding/freezing issue is relatively minor when compared with the excellent traits of these screws.  Their light weight and high performance have earned them a place on my climbing rack both for water ice and alpine ice.