This update addresses Pocket Cameras.  A follow on update will address Micro 4/3 system cameras and lenses, including the new Olympus OMD E-M5

I almost never go into the outdoors without a camera.  I love taking pictures of the places I visit and the things I do.  Whether it’s climbing, hiking, fishing, or anything else in the outdoors, I like to have photographs to memorialize my trip.

Over the years, the camera gear I use has evolved quite a bit.  The biggest change came when I finally moved from film to digital cameras.   The change to digital has been a very expensive one for me.  With my film cameras, I used the same SLR body for twenty years, and in that same two decades, only used three pocket cameras.  With film cameras, there wasn’t enough change or improvement in camera technology to entice me to upgrade my equipment very often.  What I had worked well, and that was good enough.

However, after I made the switch to digital media, I found myself switching and upgrading pretty regularly.  I’ve found the changes to digital camera technology to be significant enough that I’m often enticed by the latest “new and improved” camera, particularly pocket cameras.

On my photography page, here, I’ve written a bit about the cameras I’ve owned over the years, so if you’re interested, you can see the progression of cameras I’ve been using.

This blog entry is a snap shot of the current state of my thinking with regards to camera equipment.   As camera companies continue to expand and improve their offerings, no doubt I will be tempted by some of them.  For the time being, however, I’m pretty happy with the state of the art in digital cameras right now.  There are some excellent cameras available right now that work really well for outdoor pursuits.

Sometimes saving weight and space is the most important consideration and you need a small camera that you can fit in your pocket.    For me, this typically involves climbing.  If I’m climbing something hard (hard for me anyway) or technical, I typically only take a pocket camera.  System cameras with interchangeable lenses are nice, but on a difficult climb, I usually can’t justify the weight and bulk.

When it comes to digital pocket cameras, I currently own and use three different models, the Panasonic LX5, the Canon S100, and the waterproof Panasonic TS2. 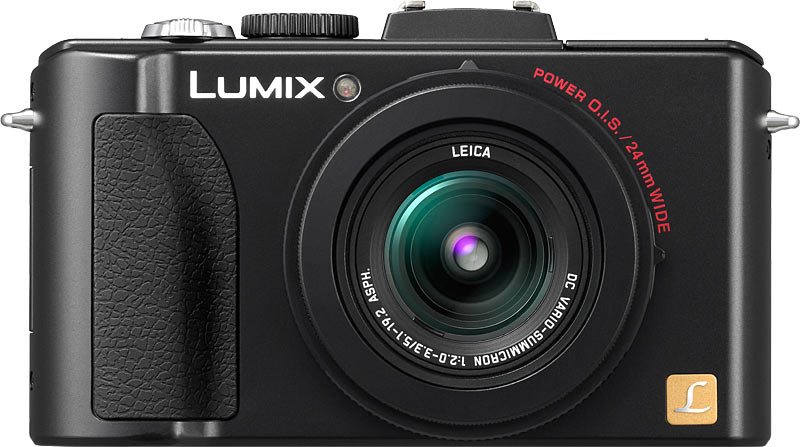 The LX-5 is the best all around pocket camera I’ve ever used.  It’s an update to the highly respected LX-3 which I used for years prior to purchasing the LX5.  The LX5 supports shooting in RAW format, and has a wide array of exposure controls, from full manual to full auto.  Size of the LX5 is a little on the large size for a pocket camera.  It will fit in a large pocket, but it’s not as small as the Canon S100.

The LX5 has a wonderfully sharp and bright lens.  I has a zoom range of  24-90mm (35mm equivalent) The lens is quite fast for a point and shoot, with a f:2.0-3.3 f-stop aperture.  For a small sensor camera, the LX5 has very good image quality, including decent low-light performance.  In camera image stabilization coupled with the relatively fast lens means that shooting at dawn and dusk is feasible, even hand held with no tripod.

The ergonomics are also decent.  The camera has a good grip “bump” that helps with handling.  There is also a very nice control dial that can be manipulated even when wearing gloves.  In order to adjust exposure (my most common adjustment,) all you need to do is to press the dial, and then roll it to the right or left to increase (or decrease) exposure compensation.  I can do this even while wearing heavy gloves.  Likewise, I can easily manipulate aperture and shutter speeds the same way even with gloves on.  For shooting video, there is a dedicated button on top of the camera that allows for one-touch HD video recording.

The biggest ergonomics issue with the LX5 is the lens cap.  Rather than an automatically retracting lens cover, the LX5 has a lens cap that you need to remove by hand before you can take pictures, and replace when you’re done.  Luckily, it has an integrated keeper string to keep you from dropping it.  Another ergonomics issue is that the slider that sets image aspect ratio gets moved around easily, so you can find yourself shooting at 1:1 instead of 4:3 if you don’t pay attention to it.

After much experimentation, the case option that I have arrived at that I like the best is an Optech neoprene soft case.  The specific model is the Optech SOFT POUCH – DIGITAL D-SERIES D-Micro.  The case provides good protection from bumps and shocks, but doesn’t add very much additional bulk or weight.  Even with the case on the camera, I can still fit it into the smallish pocket on my windbreaker.  The case has a strap that keeps it attached to the camera even when it’s removed, so you don’t have to worry about dropping it.     Instead of the standard wrist strap that came with the camera, I added my own larger strap made from some cord.  I needed a larger strap because I often am using this camera while wearing bulky gloves and the stock strap wasn’t large enough to accommodate them.

Overall, I am extremely happy with the LX5 as a climbing camera.   It combines very good image quality, with pocketability, durability, good ergonomics, and a reasonably fast zoom lens.

The Canon is another high quality pocket camera that has good optics, shoots RAW format, and allows full manual control over exposure.  It has a 24-120mm (equivalent) lens that has even more zoom range than the Panasonic LX5, although the variable f-stop of f: 2.0 to 5.9 means the lens isn’t quite as bright as the LX5 at the long end of the zoom range.

What the S100 really has going for it is that it’s small.  While the LX5 is kind of large for a “pocket” camera, the S100 is really small.   This makes it easy to take along no matter what the circumstances.  Ergonomics are good for such a small camera, and the controls are all pretty easy to use.  The front ring around the lens provides the ability to adjust exposure compensation (or shutter or aperture in the shutter/aperture priority modes) and is easy to use with gloves on.

My favorite case for the S100 is a neoprene wrap from Always ON.  It provides protection from bumps and scrapes, is light, compact, and easy to get the camera into action.  You can wrap the neoprene around a pack strap and attache it to the strap if you want to carry the camera on your pack strap.  This is nice because you can keep the camera handy without needing a separate pouch/pocket attached to the pack strap.

I own and use both the LX5 and the S100.   Although both are good cameras, I find that I tend to take better pictures with the LX5.  Because of this, the LX5 is my camera of choice for mountaineering and climbing trips to places with spectacular scenery.  It just seems to have a slight edge in terms of picture quality in my hands.  This doesn’t mean that I don’t use the S100, however.  Because of the small size of the  S100, it’s my cragging camera of choice.  Even if I don’t have any pockets big enough to hold the LX5, I can always find room for the S100 in a small pocket, or strapped to my harness.  So, even though I tend to prefer the LX5 for image quality, I actually use the S100 more, because I tend to spend more time cragging than I do mountaineering.

In truth, both the S100 and LX5 are good cameras, and a climber who can’t be satisfied with either of these cameras probably needs to just start carrying a big DSLR, a micro 4/3 system camera, or another of the large sensor mirrorless camera options.

Sometimes, I need a camera that’s waterproof.  Usually, the time I need a waterproof camera is when I’m wading around in a fast moving creek while fly fishing and I slip and take a plunge.  Most cameras wouldn’t survive a dunking, but luckily, there are a few rugged models that are designed to be waterproof.  I’ve used a number of waterproof cameras over the years.  My current favorite is the Panasonic TS2.  The TS2 is compact, rugged, and takes decent pictures.

Image quality isn’t up to that of the S100 or the LX5, but it’s pretty decent for a pocket camera and better than the other waterproof cameras I’ve used.  Unlike the S100 or LX5, the TS2 takes pictures in JPEG format only, so you don’t have the benefits of shooting in RAW format.  You also don’t have the control over exposure that the other cameras give you.  No aperture priority, no shutter priority, no full manual control.

The TS2 is pretty small, just a tiny bit larger than the S100, so it easily fits into a shirt pocket.  One odd thing about the design of the TS2 is that the lens doesn’t retract and the clear lens cover is therefore susceptible to getting scratched if you’re not careful.  Because of this, I use the same Always On neoprene wrap that I use with the S100 to protect from scratches.

I haven’t gone snorkling with the TS2, but it’s survived numerous dunkings and occasional drops without any ill effects.  In addition to being able to survive unintended dunkings in water while fishing, waterproof cameras can be fun for candid underwater fish photos.

Although I’d like to be able to own and use all the new cameras that are coming out lately, sadly I can’t afford to buy them all.  That doesn’t keep me from checking them out, however.  There are a few new pocket cameras that look like interesting options for outdoor photography.  I haven’t used any of them, but based on various web reviews, they look like contenders.

The Sony Rx100 is the new top contender for a high quality pocket camera.  Sony has shoe-horned a large sensor into a camera body almost as compact as the Canon S100.  Initial reviews of this camera have been overwhelmingly positive.  If I were in the market for a new pocket camera (but I’m not) the RX100 would be my top pick.

Fuji X10  This camera is quite a bit larger than the S100 or the LX5, but it has a built in viewfinder in addition to the standard lcd screen.  Image quality appears to be very good from the pictures I’ve seen in various reviews.   There’s been some talk about some “white orb” artifacts that show up in certain direct lighting conditions, but hopefully Fuji will fix this in a firmware upgrade.    The X10 seems like a very nice camera, but it’s just too large for me to really view it as a “pocket camera.”  If you don’t mind carrying a larger camera with you, however, it might be a good option.

One of the best real world reviews I’ve seen of the X10 is HERE.

Olympus announced a new waterproof/shockproof camera with some interesting features and specifications.  See information HERE.  Based on the information available, it doesn’t look like a huge jump forward in waterproof cameras, but looks very competitive with the Panasonic TS4.    If I were in the market for a waterproof camera, the Olympus would definitely be on my list.

I’m a bit disappointed this camera isn’t more focused on the higher end of the pocket camera spectrum.   What I’m waiting for is a waterproof camera that has the image quality of the S100 or LX5, with RAW file support and aperture and shutter priority and full manual modes.   Until somebody comes out with a waterproof camera with these “enthusiast” features, I’m sticking with my TS2.