The last week in March, me and 3 friends skied from Mammoth Lakes to Tioga Pass.  We started skiing Tuesday morning, and reached the car Saturday, early afternoon.   We passed through some truly spectacular country.  Here are some details of our trip.

We drove to Lee Vining, and left our car at a parking lot near the winter gate that closed the road up Lee Vining Canyon.  We used a shuttle service, Mammoth Shuttle, to pick us up from there and drive us to Tamarack Lodge.   We spent Monday night at the Tamarack Lodge and had a great dinner at the Lodge’s restaurant.  Tuesday morning we headed out on our adventure.  The touring started on the groomed Tamarack Lodge x-country ski trail right outside the door.  We took the left fork at the warming hut, and were on our way.

We skied along the gentle, groomed trails following the signs to Horseshoe Lake.  Then we left the groomed trail and headed up and over the broad slopes of Mammoth Pass and down into Red’s Meadow.  From the meadow, we decided to take the road north, following snowmobile tracks, and eventually taking a left fork that brought us to a bridge crossing across the river.

From here, it was a long, steady climb up towards Minaret Falls, through open forests.  We had planned to reach Minaret Lake the first day, but we were getting a bit tired, and decided to make camp in the drainage a ways below the lake.  The camp spot was sheltered and pretty, and surrounded by big trees, but if we’d known how scenic it was at Minaret Lake, we probably would have pushed on the extra hour to reach the lake.  GPS coordinates for our camp site are:  37.653633/-119.112911 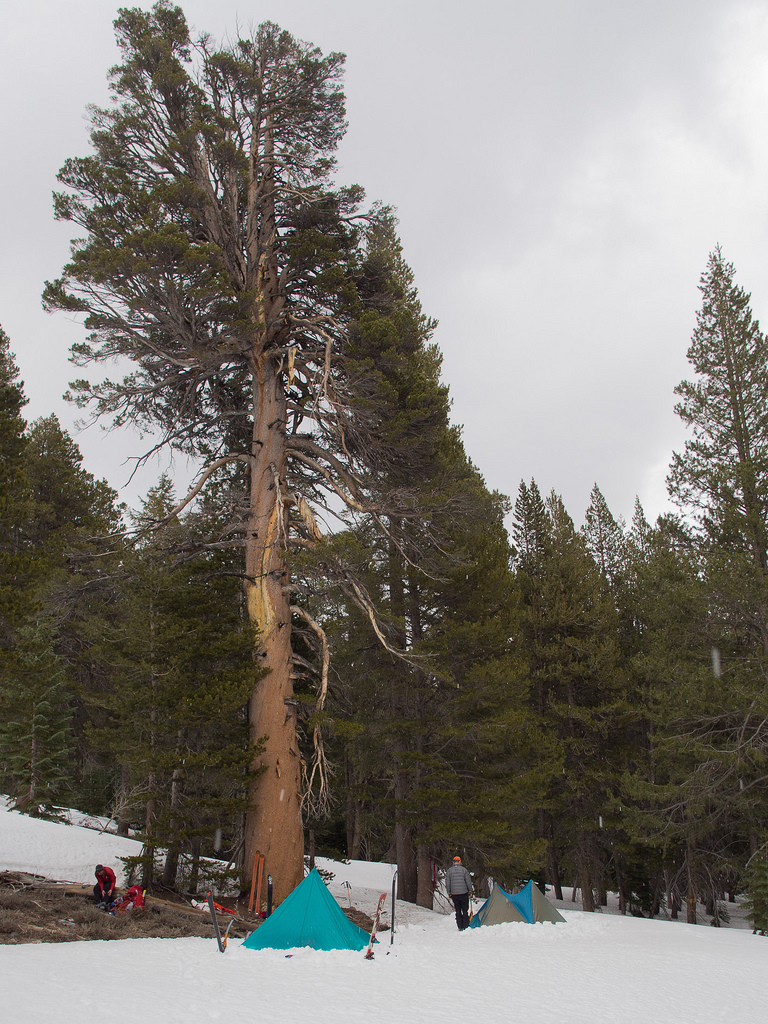 Next morning, we followed the drainage up to Minaret Lake.  When we finally crested the steep rise and saw the basin, we were treated to some really beautiful alpine scenery.  In fact, from here on, the terrain became much more rugged and alpine in nature, with sweeping vistas and granite peaks replacing the pine forests we had been traveling through. 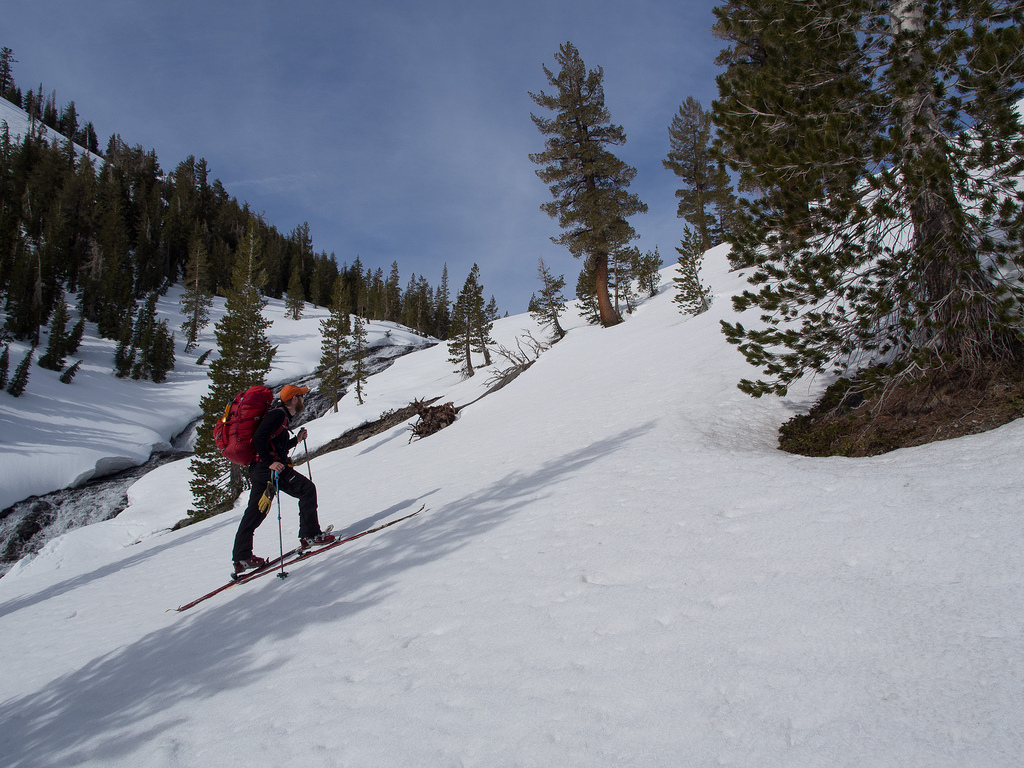 Climbing up to Minaret Lake 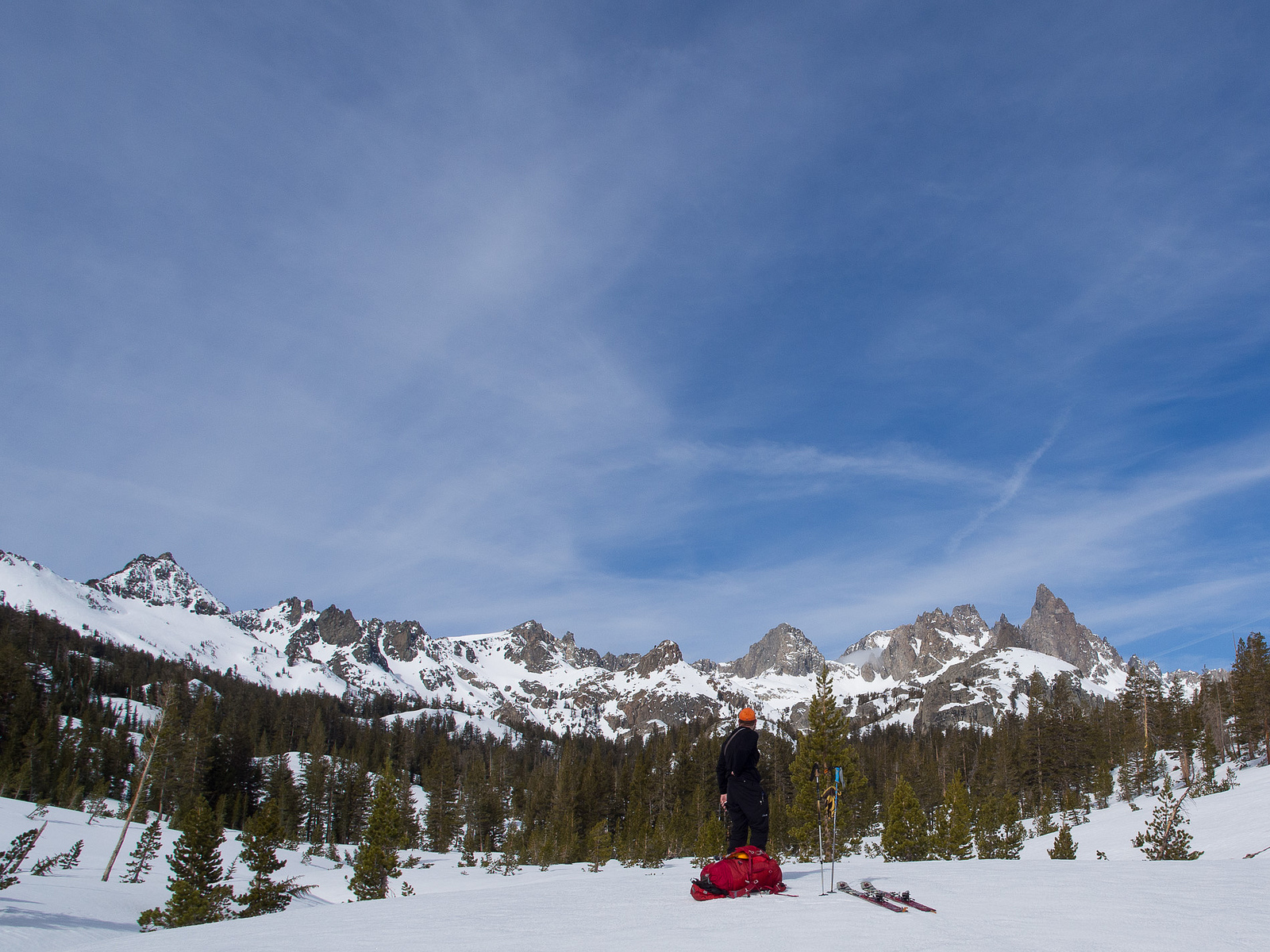 The pass above Minaret Lake leading to Cecile Lake was steep and icy.  We strapped crampons on our boots, and strapped our skis on our packs and headed up a left-slanting couloir the led up to the top of the pass.  If we hadn’t brought crampons and axes, we probably could have booted up it, but it was quicker and more secure with our ice gear.

From the pass above Cecile Lake, it was a nice, mostly downhill run down to the valley above Ediz lake.  From there, we had to climb again, and by late afternoon had arrived at Nydiver Lakes.  We were tired, and the weather was cold, blowing and the skies were filling with dark clouds, so we made our camp on the edge of the lake.

Because of the winds, we took our time preparing our camp, pitching our tents behind a rocky knoll, and constructing snow walls to shield us from the heavy gusts.  I treated myself to an extra cup of hot cider that evening to ward off the cold. 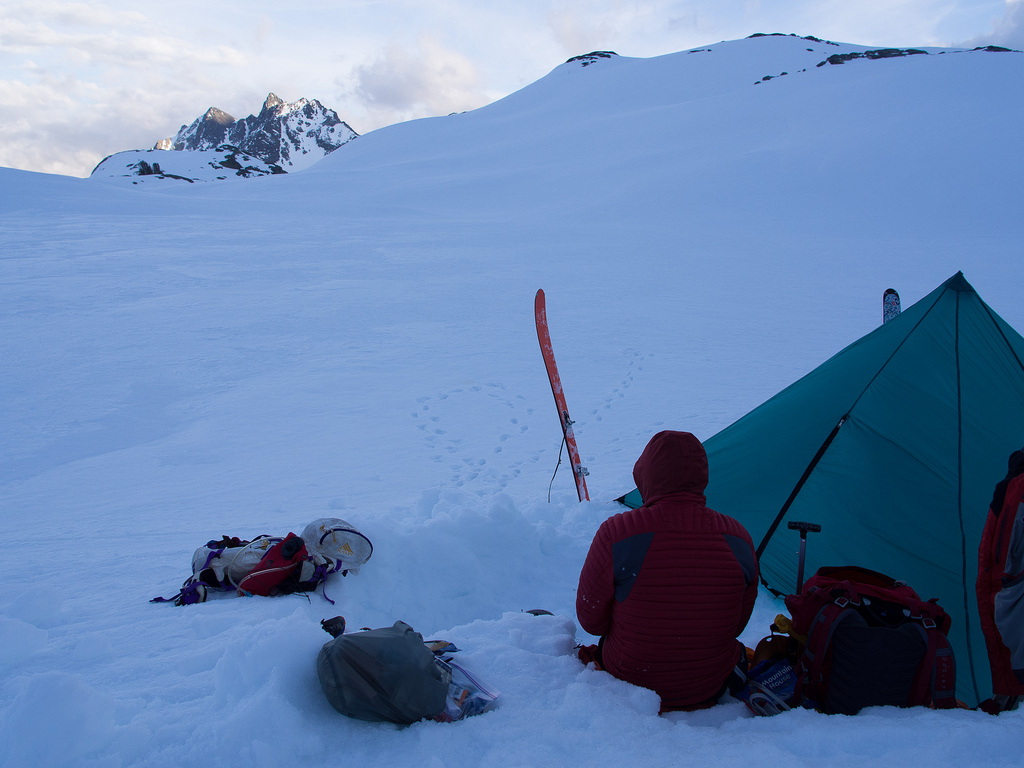 The next day, we made short work of the 2 passes north of Nydiver, and then traversed the wide expanse of Thousand Islands Lake.  Then a long, steady climb up to Island Pass. 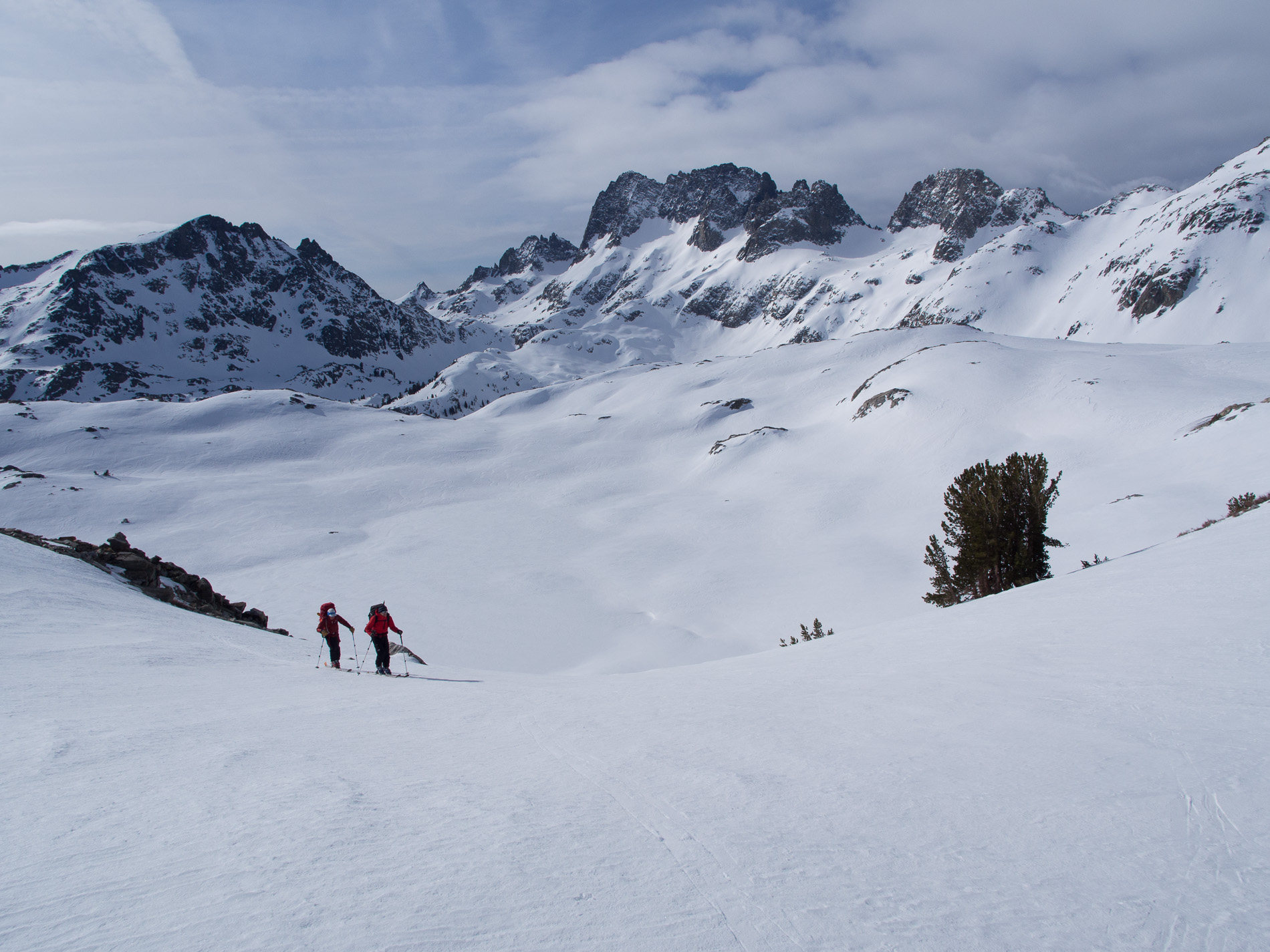 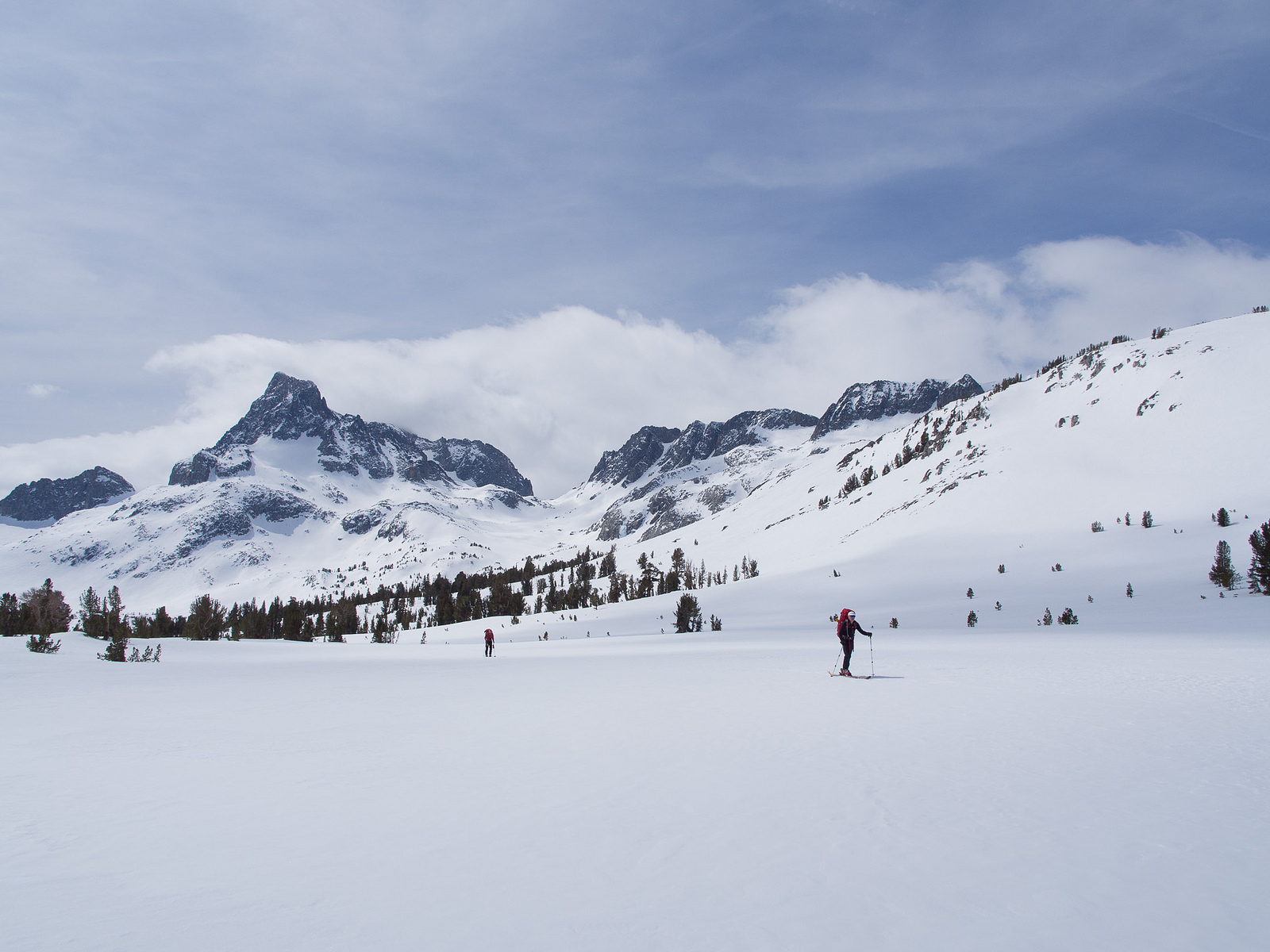 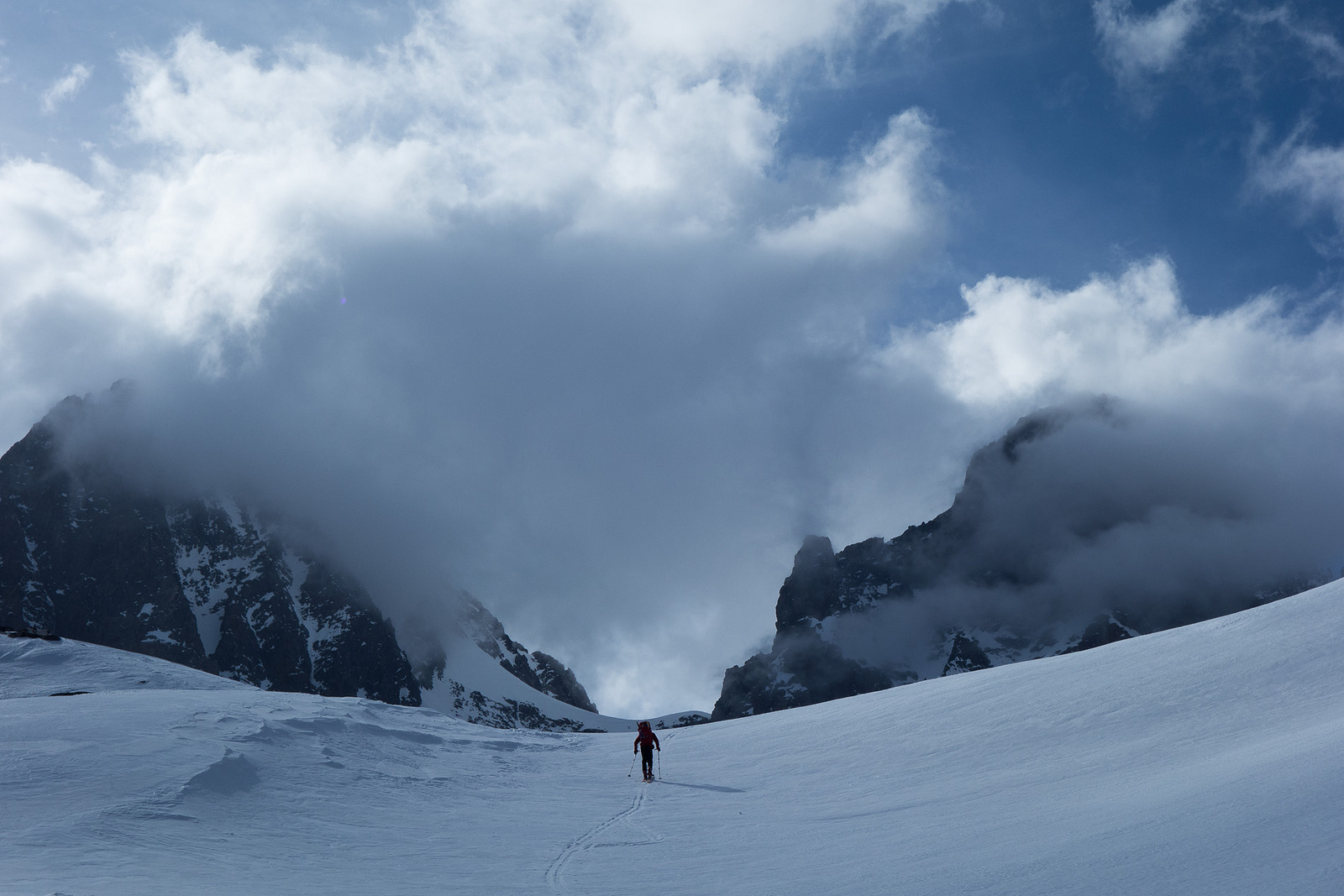 Climbing into the clouds

The descent down from Island Pass was quick, and we crossed the creek right above Waugh Lake.  The climb out of this drainage was strenuous, and by the time we got to the headwall/pass below Lost Lake, I was pretty beat.  We made camp in the valley, with views of the Palisades to the East, the Pass to the North, and the far off peaks we had passed earlier spread out to the South. 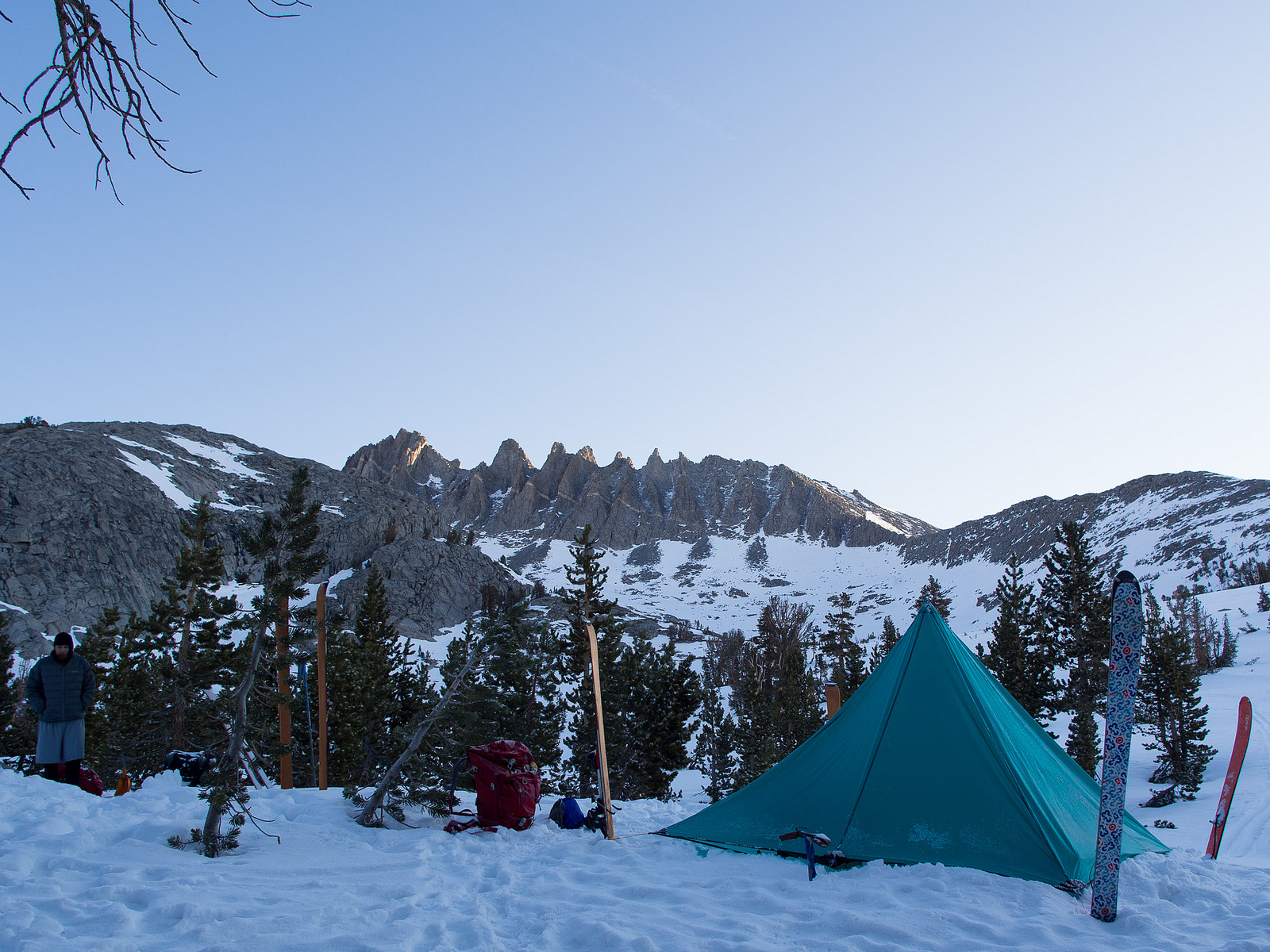 Our campsite the 3rd night

The next morning, we were faced with a bit of a conundrum.  We were not sure how best to tackle the pass up to Lost Lake.  Some of us thought that the couloir North/Northwest of us would be the best option.  Others (myself among them) figured that contouring around to the East and Northeast looked like an easier option.  In the end, we decided to contour around on the less direct Northeast route.  This way turned out to be pretty easy, with a relatively gentle slope.  (The direct route up the couloir might have been fine too, but I guess we’ll never know now.) 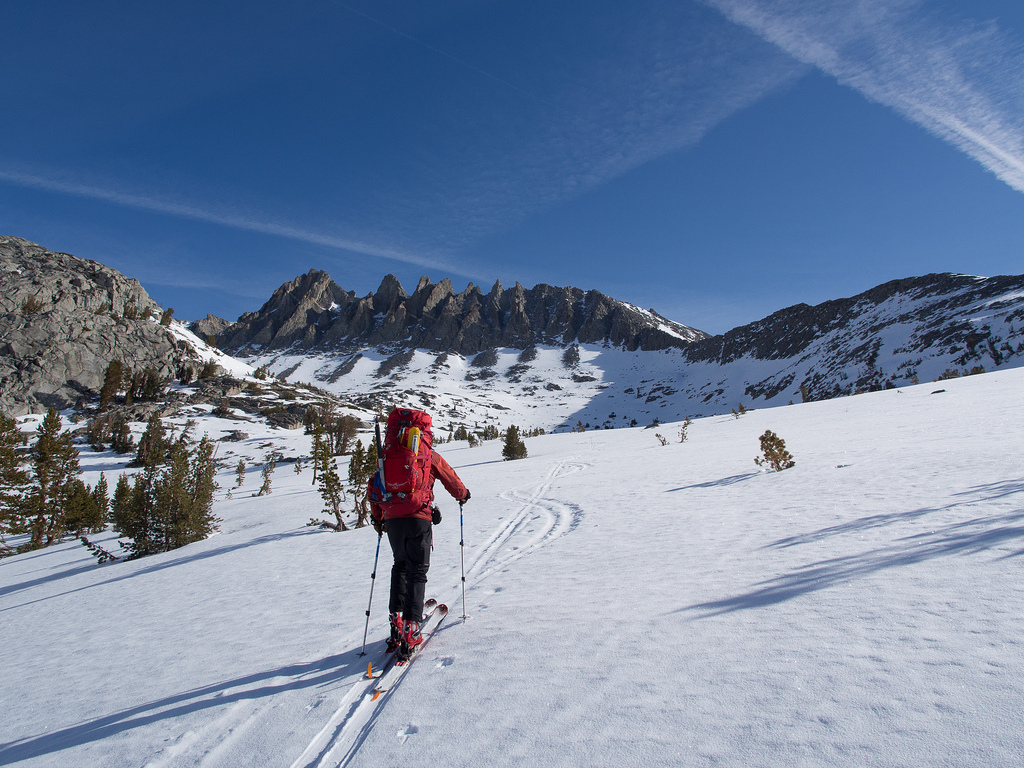 Skinning up to Lost Lake

After the pass above Lost Lake, we traversed Northwest  until it was time to turn Northeast and make the long climb up to the Kuna Connection pass.  We had been fearing the Kuna Connection for the whole trip, as it was reputed to be the steepest slope we would encounter.  If it was icy, then descending could be quite challenging. 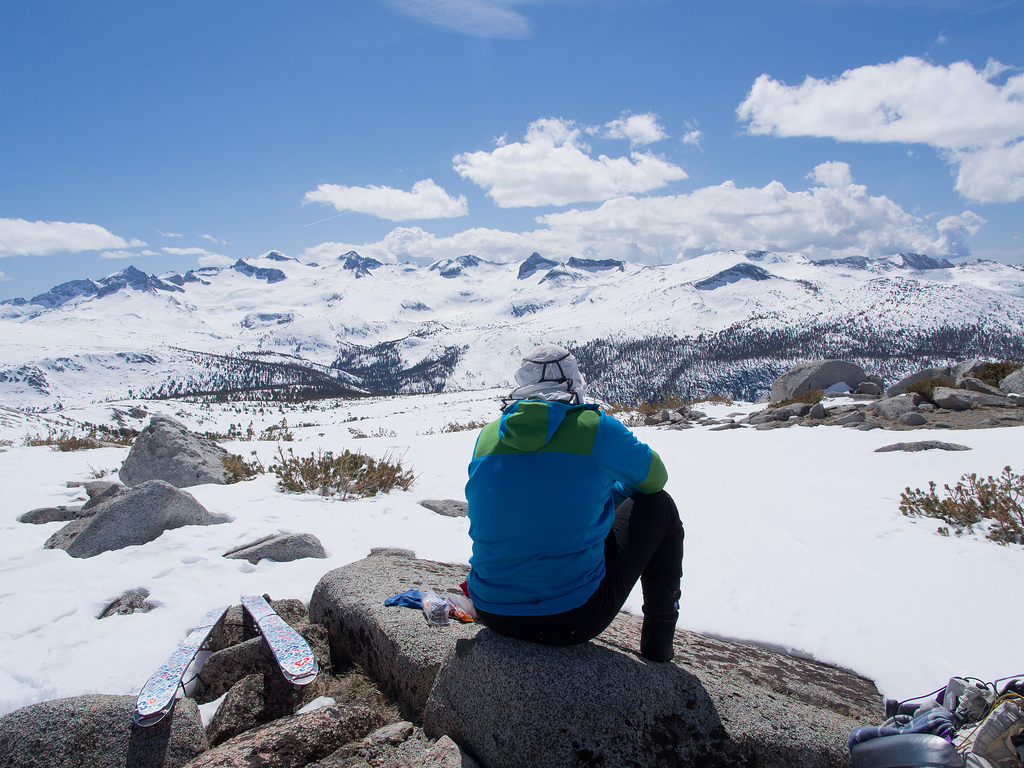 When we finally arrived at the Kuna Connection pass, our first emotion was dismay.  It looked dangerously steep and pretty scary.  However, the South section of the pass was much steeper than the North, and as we traversed the ridge Northward, we found that the angle eased up quite a bit.  It was steep, but not suicidal.  However, there were a lot of large rocks midway down the slope that could make things quite painful if a skier were to fall here.   My friends all skied down.  I decided I wasn’t too sure I could get down without falling.  I knew I could get down walking, however, so I clipped my crampons on my boots, strapped my skis to my pack, and down climbed the steepest section before putting on my skis again. 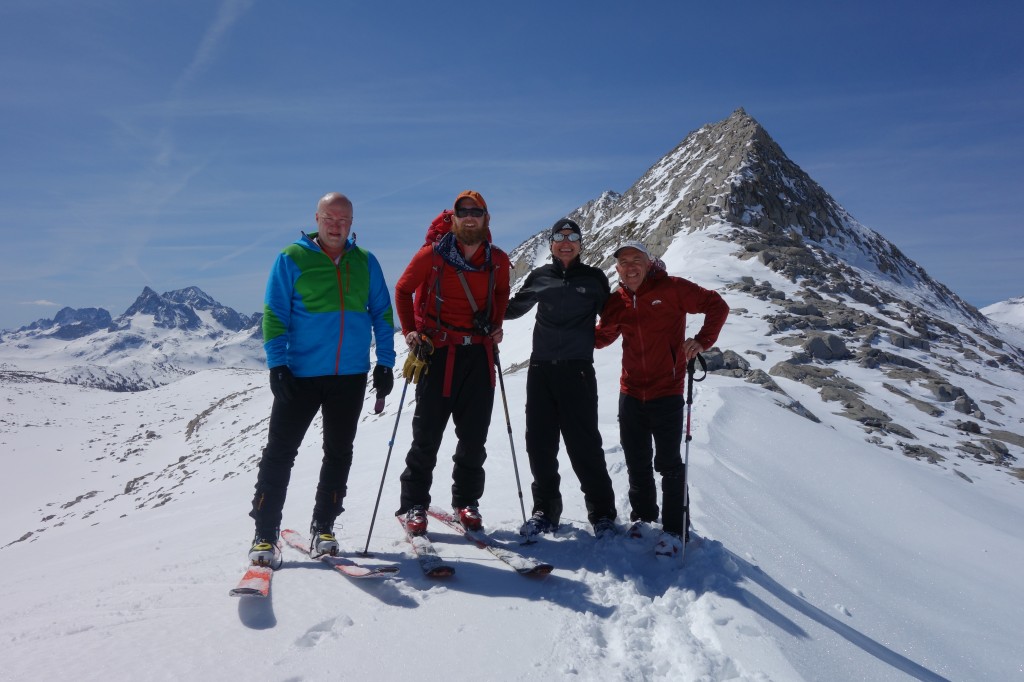 On top of the Kuna Connection Pass

Looking at my friends, who were all very far ahead of me by this time, I was in a hurry to catch up to them.  I opted not to de-skin my skis and skied down the slope with my skins on.  This turned out not to be a very good plan, as it made skiing quite difficult.  Making turns was very challenging, and the skins would grab at inopportune moments, throwing me off balance.   I made it down, but would have been much happier if I’d taken the few minutes necessary to take my skins off.

With the dreaded Kuna Connection behind us, we had a long slog out the gentle drainage towards Tioga Pass.  The snow was deep, wet, and soft, and breaking trail was a real challenge.  We alternated positions in line, with the trail breaker rotating to the back when he got too tired.   Finally, we set up camp in the drainage along the creek.  It was noticeably warmer than it had been up at our higher elevation camps.   It was our last night on the trail.  The technical difficulties were behind us.  I was getting excited to get back to civilization.

The next morning, the soft deep snow had frozen from the overnight low temperatures, so thankfully we didn’t have to slog through it breaking trail like we had the previous afternoon.  On good snow, the descent went pretty rapidly, with our biggest challenges being a couple of stream crossings.

We left the drainage, and headed north up a broad open valley with beautiful views and under sunny skies.  Finally, we reached Tioga Pass.   We were able to ski from the pass to just below Ellery Lake before we had to strap on our skis and start walking down the paved road to where our car was parked at the gate.   We all knew that a hike down the road was part of the trip, so we had packed running shoes to wear for this section.  I strapped my skis and boots to my pack and motored down the road, fueled by thoughts of Kentucky Fried Chicken. 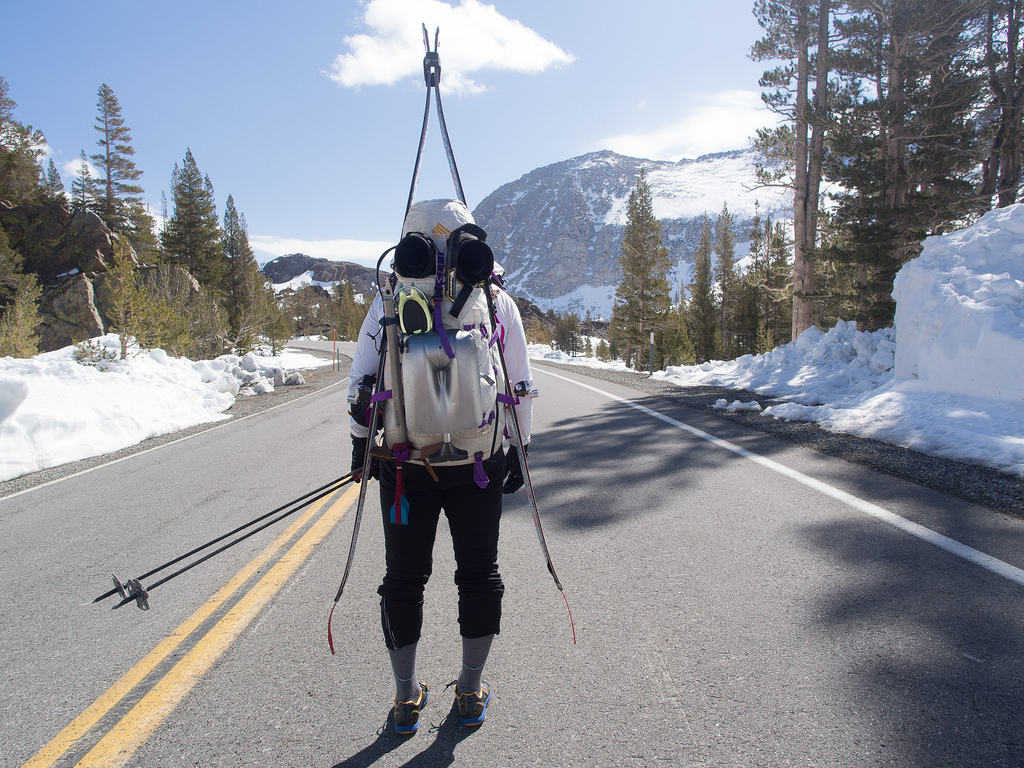 The hike down the road took several hours, and I was pretty happy to finally see the parking lot with our car in it.   The trip had been challenging and amazing, with gorgeous scenery along most of the way.

I can’t seem to figure out how to put in a downloadable link to a Google Earth track of our trip from Tamarack Lodge to the top of Tioga Pass.  However, if you contact me, I’d be happy to e-mail you the KML file. 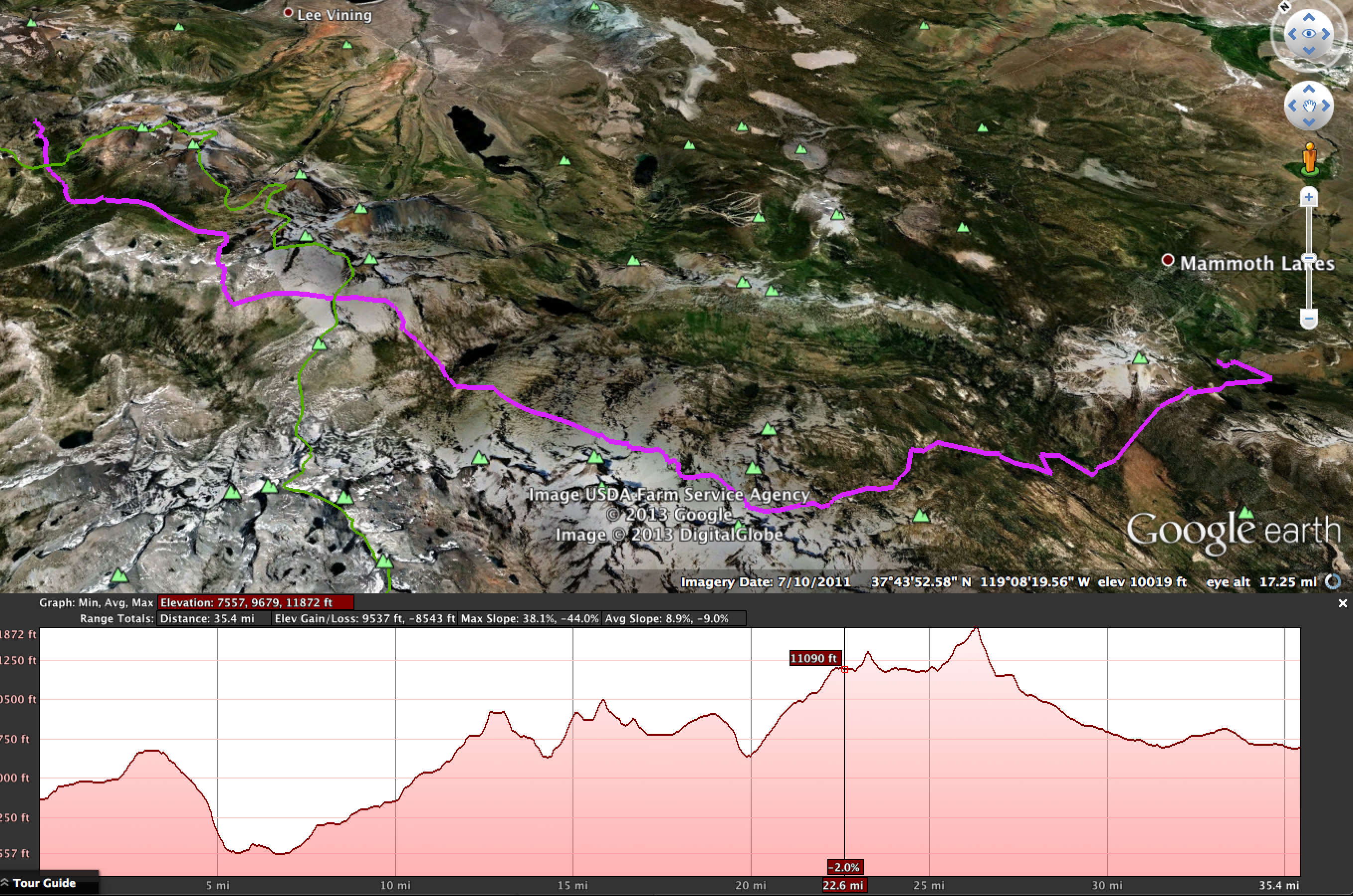 Our route, along with an altitude graph 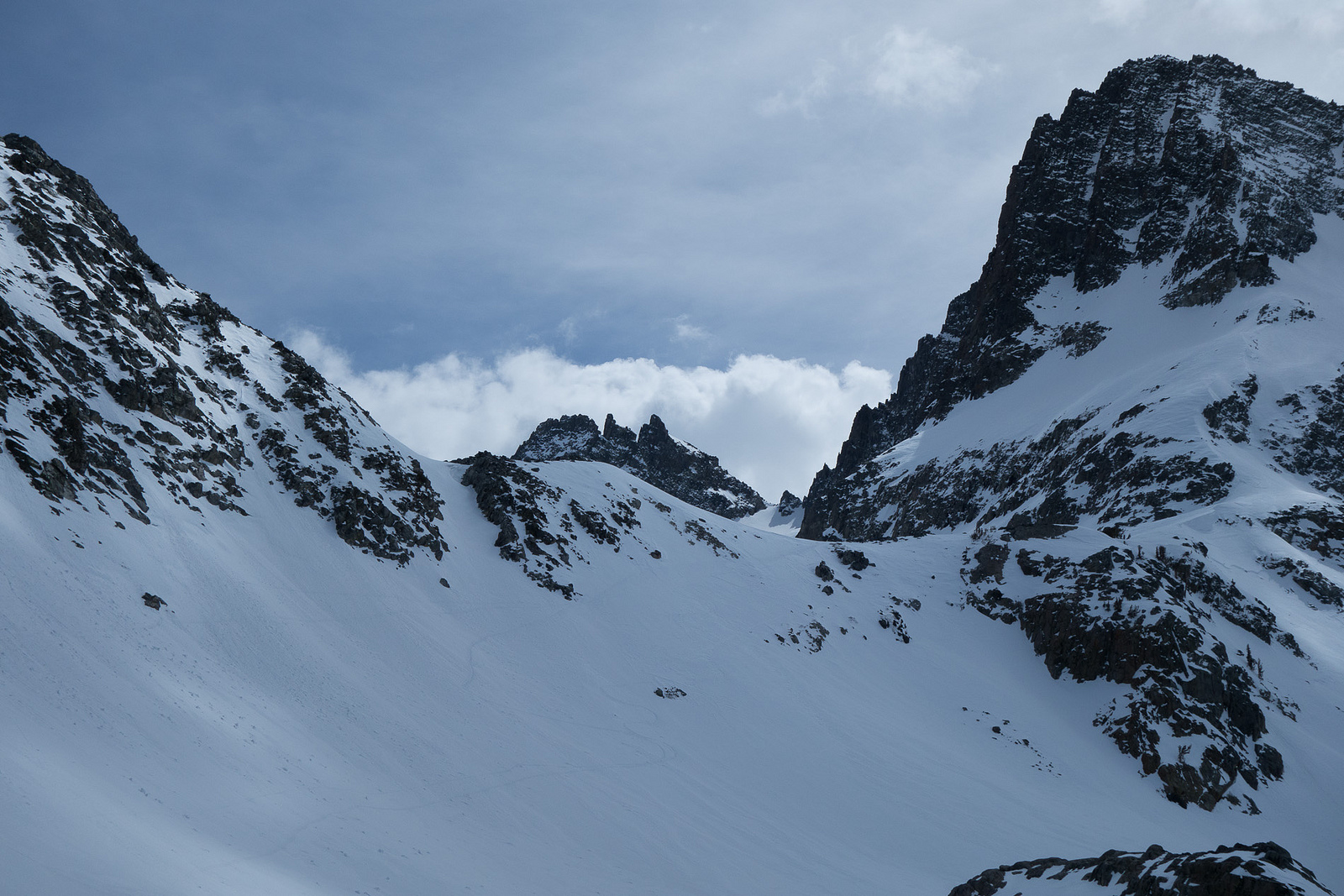 Our ski tracks down one of the passes (can’t remember which one this is.) 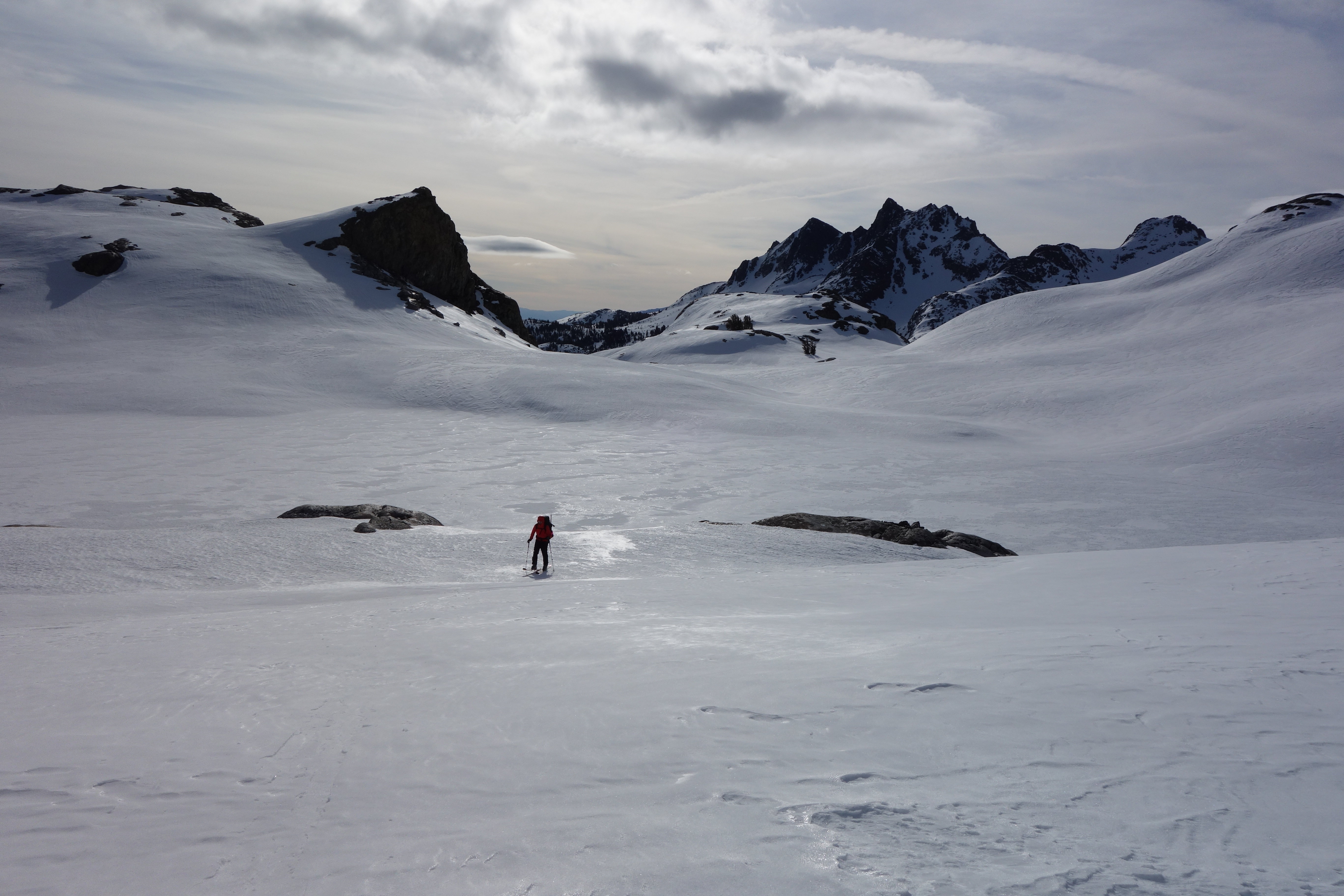 Skiing through the wind