I recently bought some of the new Petzl Laser Speed Light ice screws.  The Speed Light screw is one of two screws on the market that is constructed with aluminum.  (The other aluminum screw is the E-Climb Klau screw which I reviewed previously HERE.)

I have not yet had a chance to thoroughly test the Petzl Speed Light screws, however I have taken them on one alpine ice route (Mount Helen’s Tower 1 Gully in the Wind River Range.)

Based on this initial use, these are my first impressions of the Petzl screw.  I will update this post when I get more opportunities to use these screws and have enough data to provide a more thorough review. 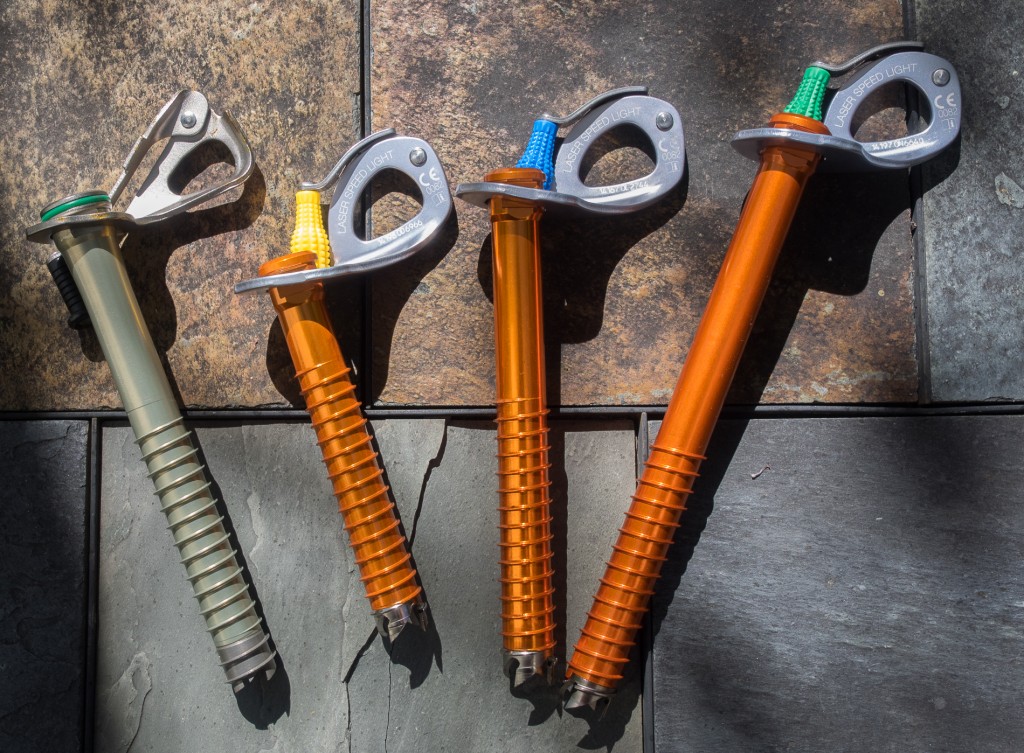 Construction:
The  Speed Light is made mostly from aluminum.  The body and hanger are aluminum.  The teeth and the crank handle are steel.  The crank is a fold-out handle that provides extra leverage when turning the screw into the ice.

Weight:
Light weight is the primary benefit of an aluminum bodied screw.  The Petzl Laser Speed Light is significantly lighter than a steel screw, and is also a little lighter than the E-Climb Klau aluminum screw.

Weights for the Petzl Speed Lights are as follows:

Some other screw weights for comparison:

The Petzl Speed light achieves this low weight because most of the screw is made from aluminum, including the tube body and the hanger.  The E-Climb Klau incorporates an aluminum tube, but the hanger is constructed from steel.   On the Petzl, only the teeth and crank handle are steel. 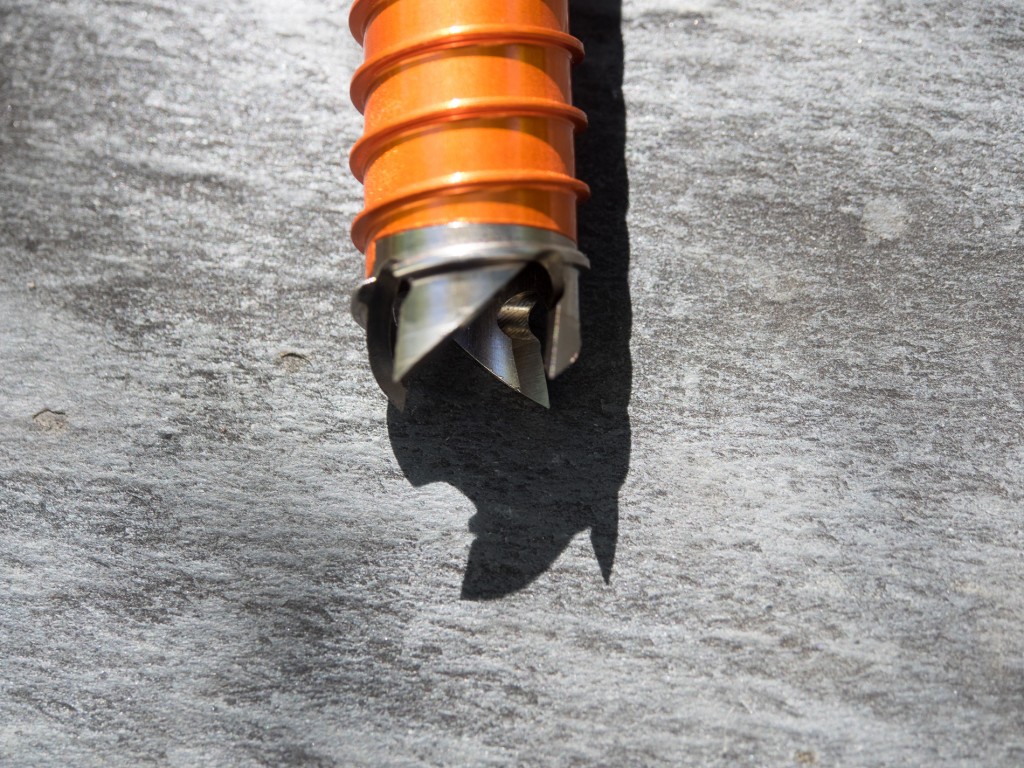 The Speed Light racks well.  The screws have hangers that nest neatly on the ice clipper and don’t get tangled or fouled up easily.

The teeth are aggressive, and the Speed Light starts easily.  In my use, they seemed to start about as well as the E-Climb Klau, but the ice we were climbing on was relatively soft and warm, so I can’t really say which might be better, as most any screw will start easily in softer ice.  I will need to wait until I encounter harder colder ice conditions before I will be able to do a real evaluation of how easily the screw bites and starts compared with its competitors.

One negative thing I did notice when using the Laser Speed Light was that it had a tendency to bind up and become quite difficult to turn on occasion.  This happened constantly on the alpine ice route I was using them on.  I would start the Speed Light, begin cranking, and then, rather suddenly, the screw would become very difficult to turn.  The first time this happened, I wondered if I had hit a rock.  Given the depth of the ice, however, I determined that this was unlikely, and decided to just keep cranking.  After a fair amount of effort, the screw began to turn normally again.  This was a common occurrence with the Petzl Speed Light screws, with the “binding” occuring once or twice with just about every Petzl screw I placed. My partner also experienced the same binding as I did.

I’m not sure why this happened, but my speculation is that the ice core was melting and then re-freezing in the tube.    Temperatures we were climbing in were hovering right around freezing, and it’s possible that the friction of placing the screw was causing slight melting of the ice core, and then it was freezing up again, creating blockage.  Aluminum conducts changes in temperature more readily than steel, which may contribute to this effect.

I have noticed that when using aluminum screws, (both Petzl and the E-Climb screws) it is generally a bit harder to clear the core from the tube than when using a steel screw, which seems to support this theory.  However, I really don’t have anything else to support this belief or otherwise explain this behavior of the screws.  I also don’t even know if this is going to be common when using the Speed Light, or if this “binding up”  was just the result of an unusual combination of ice conditions and temperature.   I should note, however, that I did not experience any similar binding when using the aluminum E-Climb Klau screws.

At this point, I’m not sure what to make of this experience.  I need more use of the Laser Speed Light in a variety of conditions to determine how much of a factor this will be.  At any rate, the screws were still usable, they just require significant effort to get them started again once they bind up.

I don’t have enough uses of these screws across broad conditions to come to final conclusions, but based on my initial use, I think that these screws will find a place on my alpine climbing rack when weight is at a premium.  They start easily, rack easily, and weigh significantly less than steel screws.  There is the issue of binding up when driving them home, but my suspicion is that the binding issue is likely limited to specific temperature and ice combinations, and won’t be a universal problem.

I am looking forward to using them more.

UPDATE:    My updated conclusions after using these screws a bit more can be found HERE.