Skyward Mountaineering is a guide service operated by alpinists Steve House and Vince Anderson.  In addition to offering guided climbs both locally and internationally, they also teach instructional workshops focusing on various aspects of climbing.  I was lucky enough to participate in their  three day Winter Alpine Climbing Intensive Workshop.

The workshop took place in Ouray Colorado, from Monday to Wednesday. Including me, there were four students.  Steve and Vince were the instructors.  The first day was spent climbing in the Ouray Ice Park.  Vince and Steve coached us on various aspects of ice and mixed climbing.  We spent time  learning how to move on low angle terrain, climbing moderate ice, downclimbing, and climbing steep ice and rock.  The emphasis was on moving efficiently with the least possible expenditure of energy. 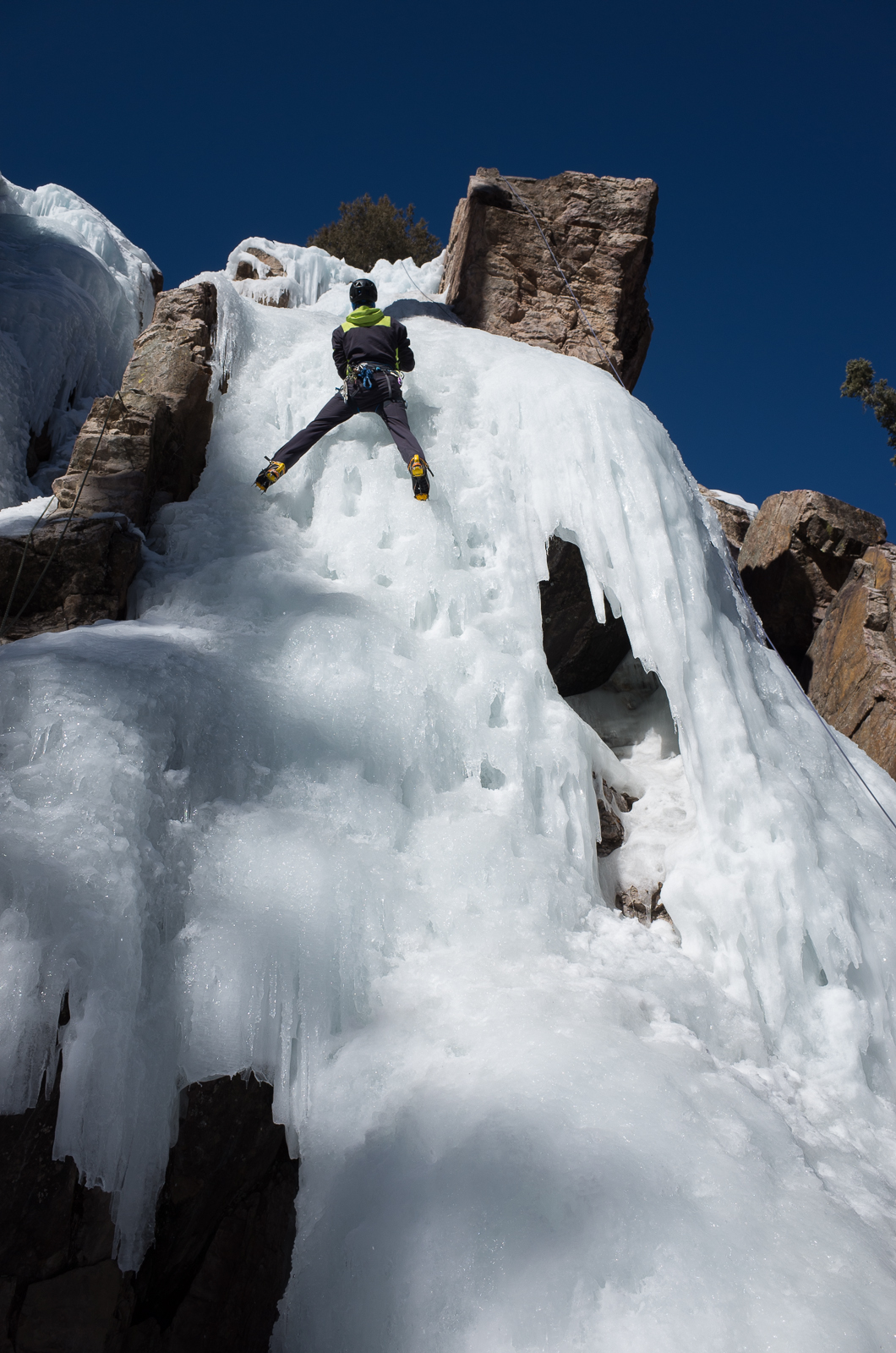 Vince Anderson, headed up the ice to set up a directional anchor

I’ve done a fair amount of climbing in the past, but this training day was super helpful.  Viince and Steve would watch us climb, and give us pointers on our technique.  The instruction on climbing rock with crampons and ice tools was particularly useful for me, because I haven’t really done much dry tooling and mixed climbing.  By the end of the first day, I had climbed the most difficult rock climbing I’ve ever done in crampons, and was getting a much better idea of what I needed to do to stay balanced and in control on rock. 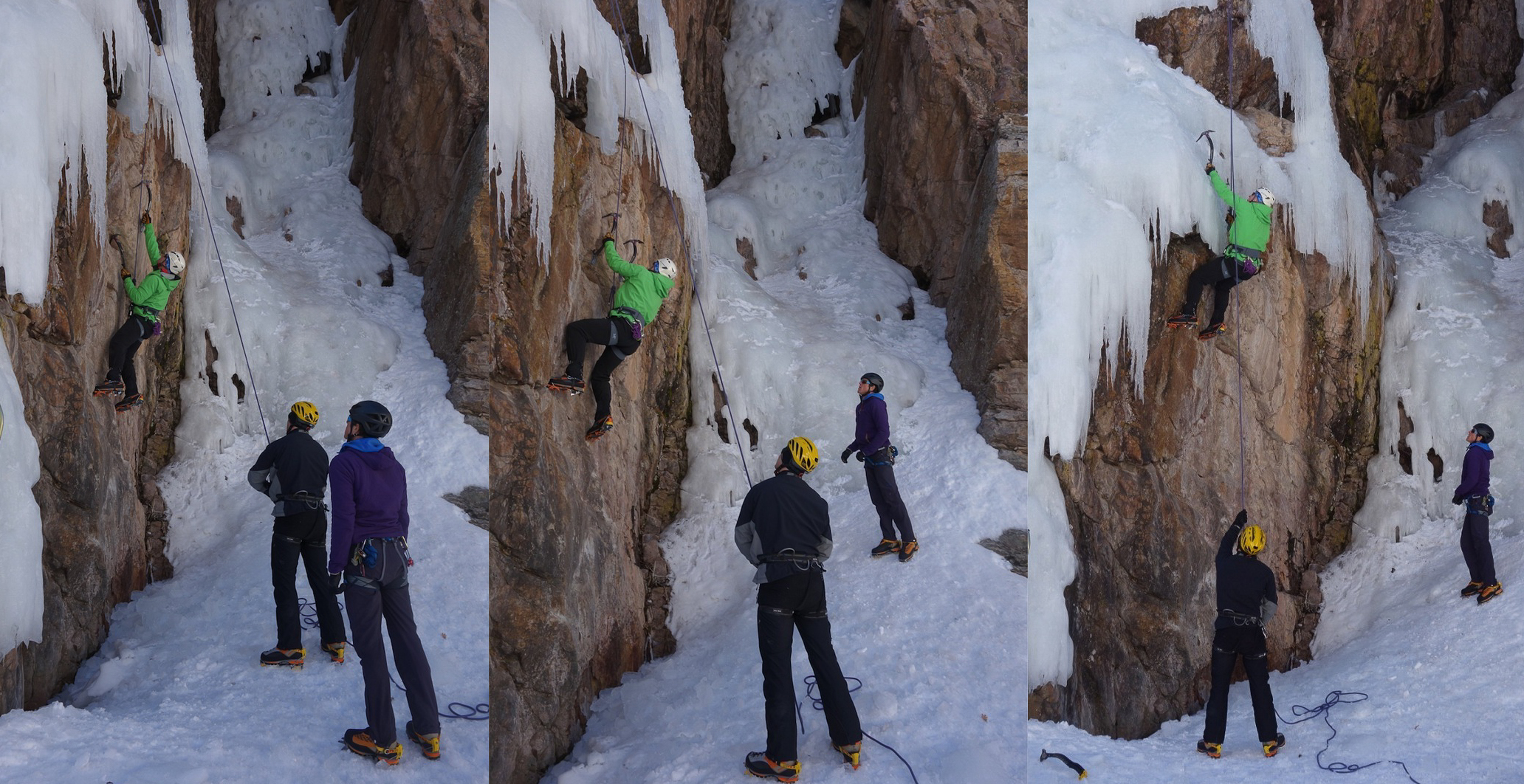 Vince, coaching me on Le Saucisson, a dry tooling route in the Ouray Ice Park

Day two began with a presentation by Steve and Vince on various skills and techniques needed for alpine climbing.  Vince talked about preparation for climbing, with a focus on mental preparation.  We discussed strategies for balancing speed and safety, and minimizing danger on route.  We got to see pictures and hear stories about various climbs he’d done to illustrate his points. 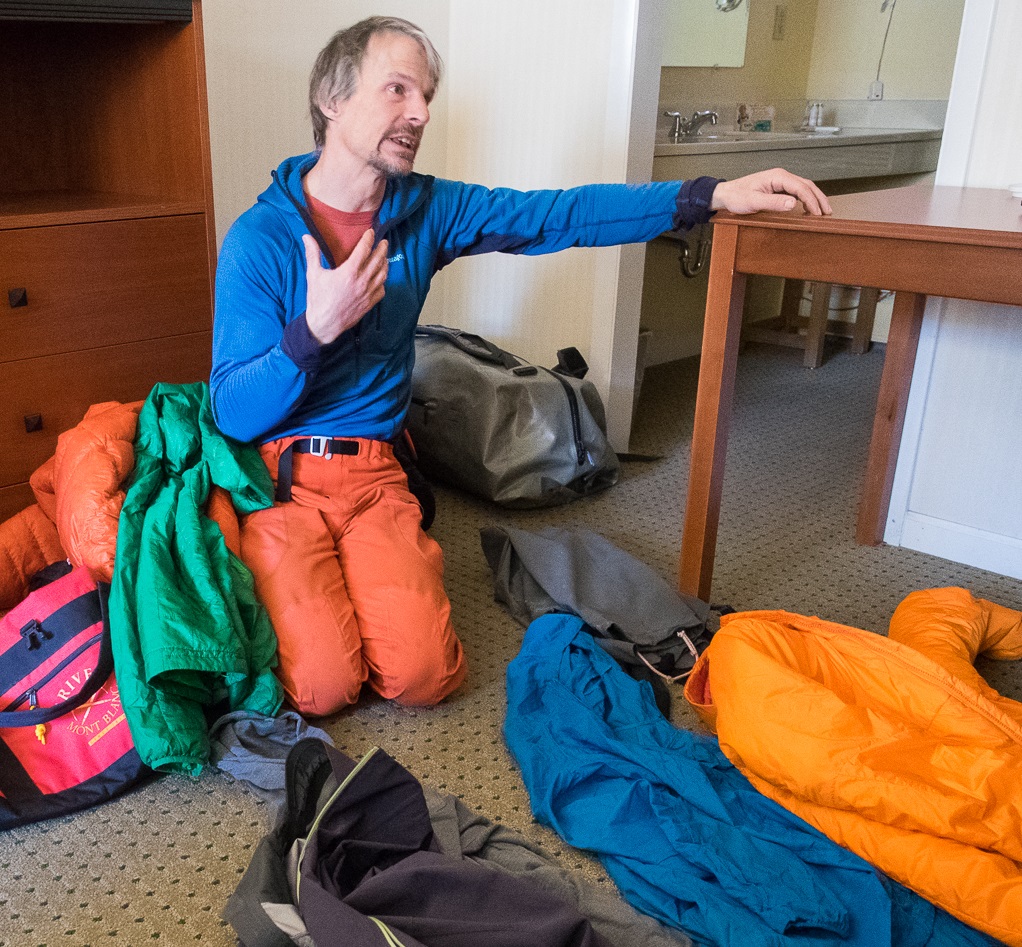 Steve House, expressing his undying love for his DAS Parka

After the gear discussion, we headed off up the Camp Bird Road to put some of the theories we’d learned into practice.  At the ice and mixed climbing spots near the road, we had some practical, hands-on instruction on the logistics of bivouacs, rope management, belays, anchors, communication, and other aspects of climbing.  We practiced belay changeovers, and set up a simulated bivi site on a narrow ledge. 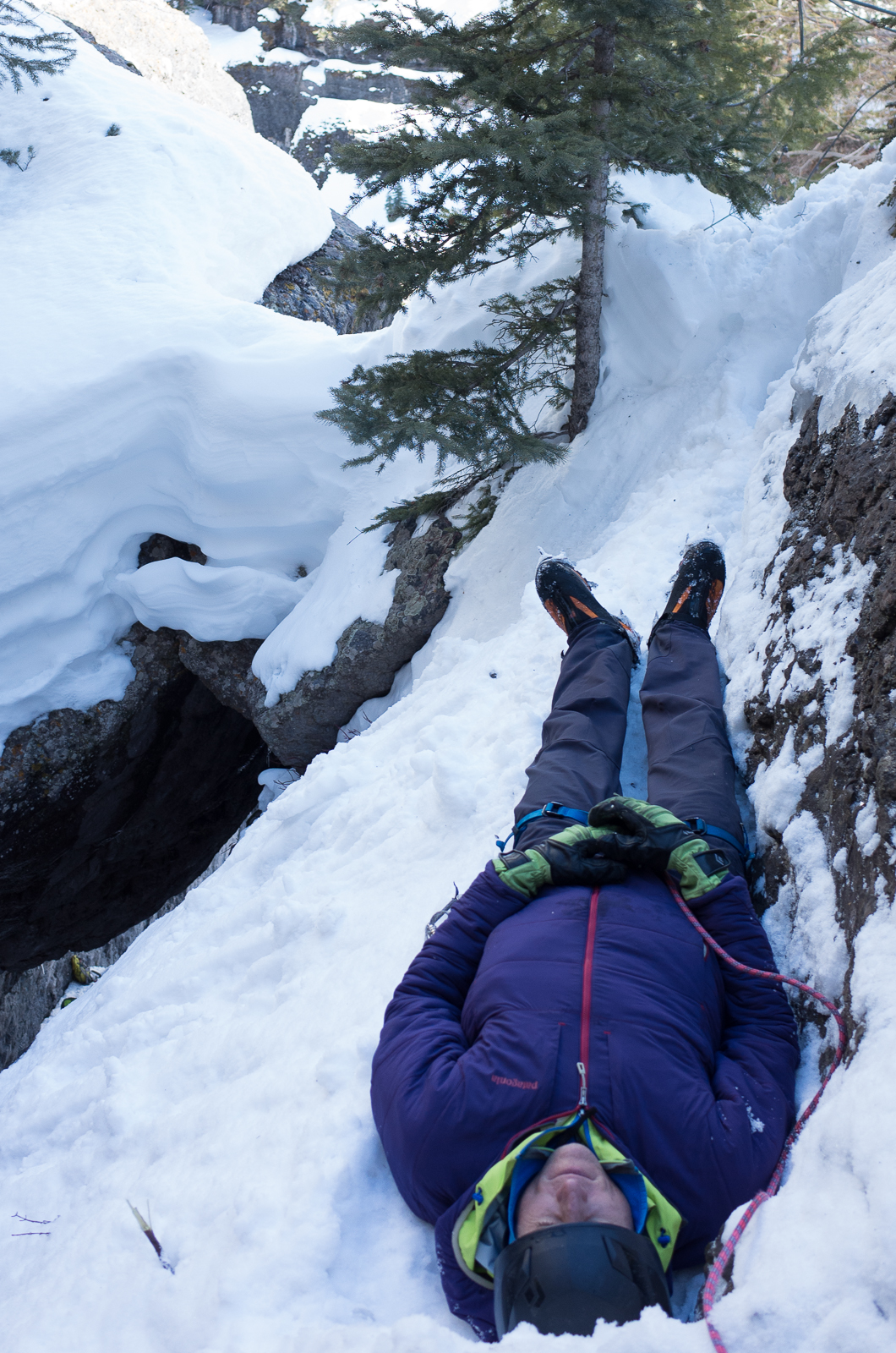 Vince Anderson on the “bivi ledge” he chopped out. (We decided not to sleep there for the night, however.)

One of the most useful parts for me was the discussion on rope management and minimizing time spent doing changeovers at belays.  When I’m climbing, it always seems like the belay changeover takes way more time than it should.  They taught us a dozen little tricks to shave time off of the exchange. 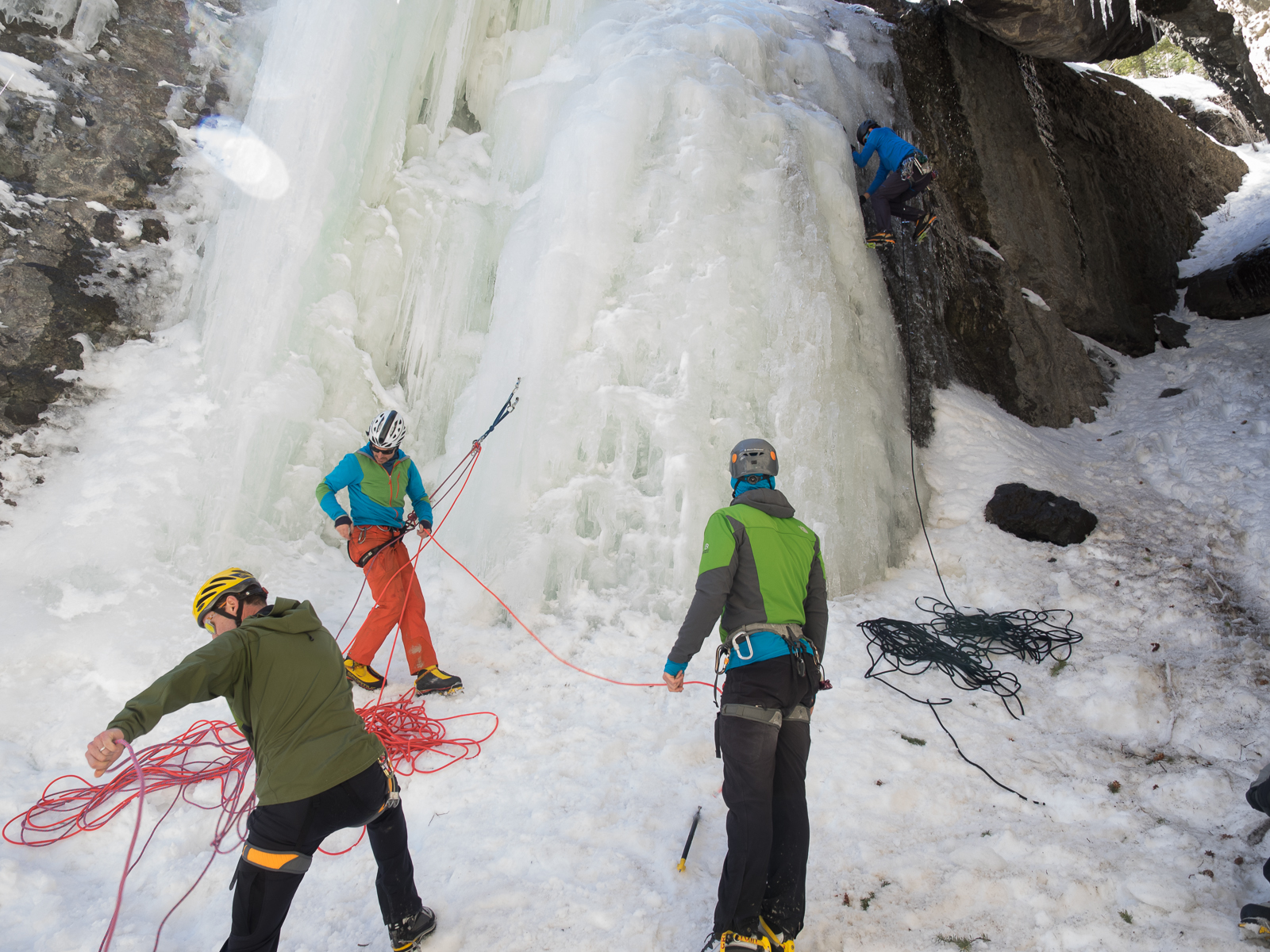 Steve House instructing on belay changeovers, while Vince Anderson heads up the ice to set up a top rope.

Interspersed with the instruction on non-climbing techniques, we also did some more climbing, and Steve and Vince coached us on our movement skills. 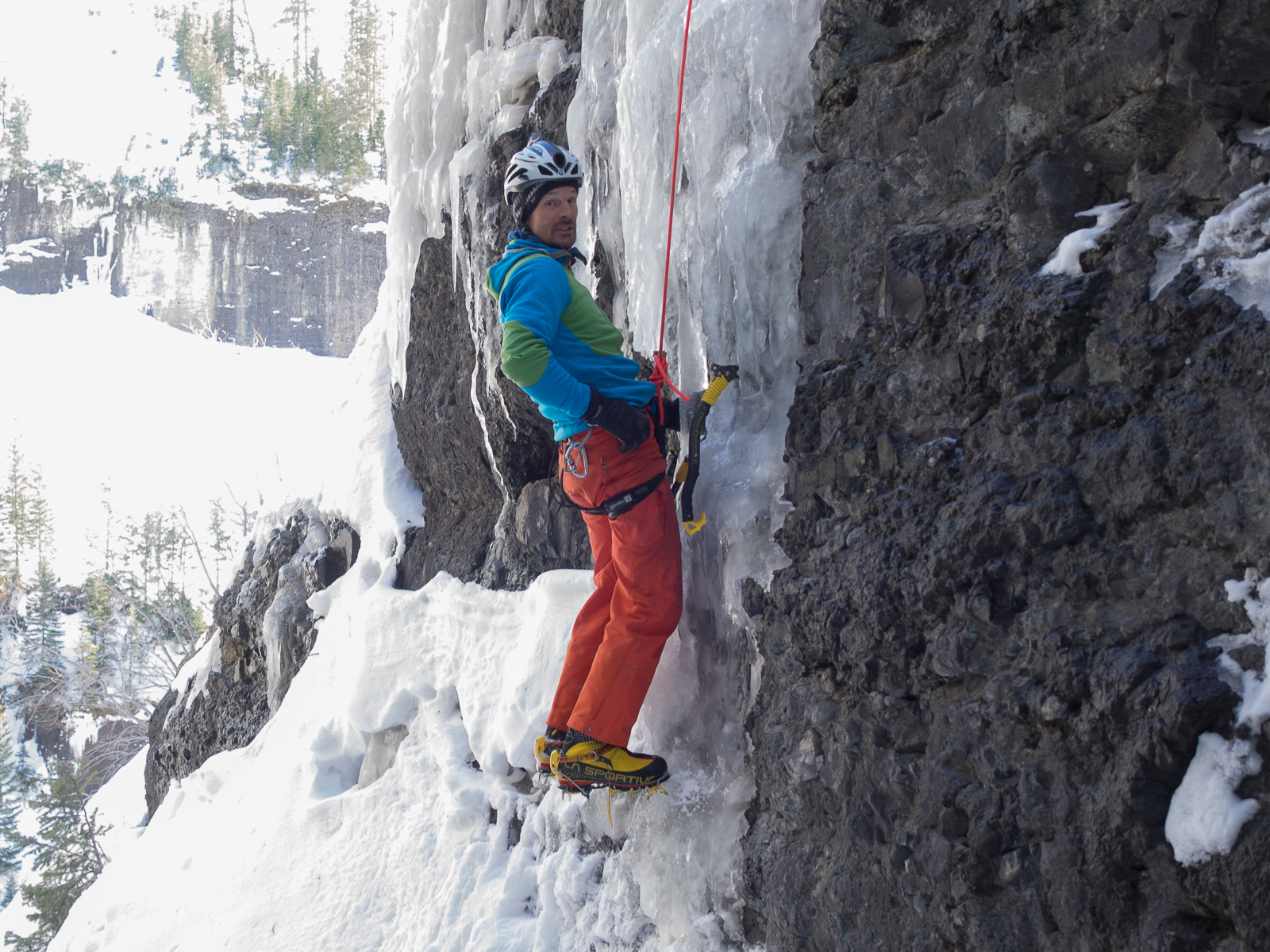 We wrapped things up as the sun was setting, and later on that evening, we all met for dinner, where we chatted, listened to Steve and Vince’s stories, and generally had a great time.  It was at dinner that we learned of our objectives for the next day.  We were going to split into two rope teams of three, and climb two multi-pitch routes that are right next to each other.  My team, led by Vince, was going to climb Bird Brain Boulevard.  The other rope team, led by Steve, was going to climb The Ribbon. 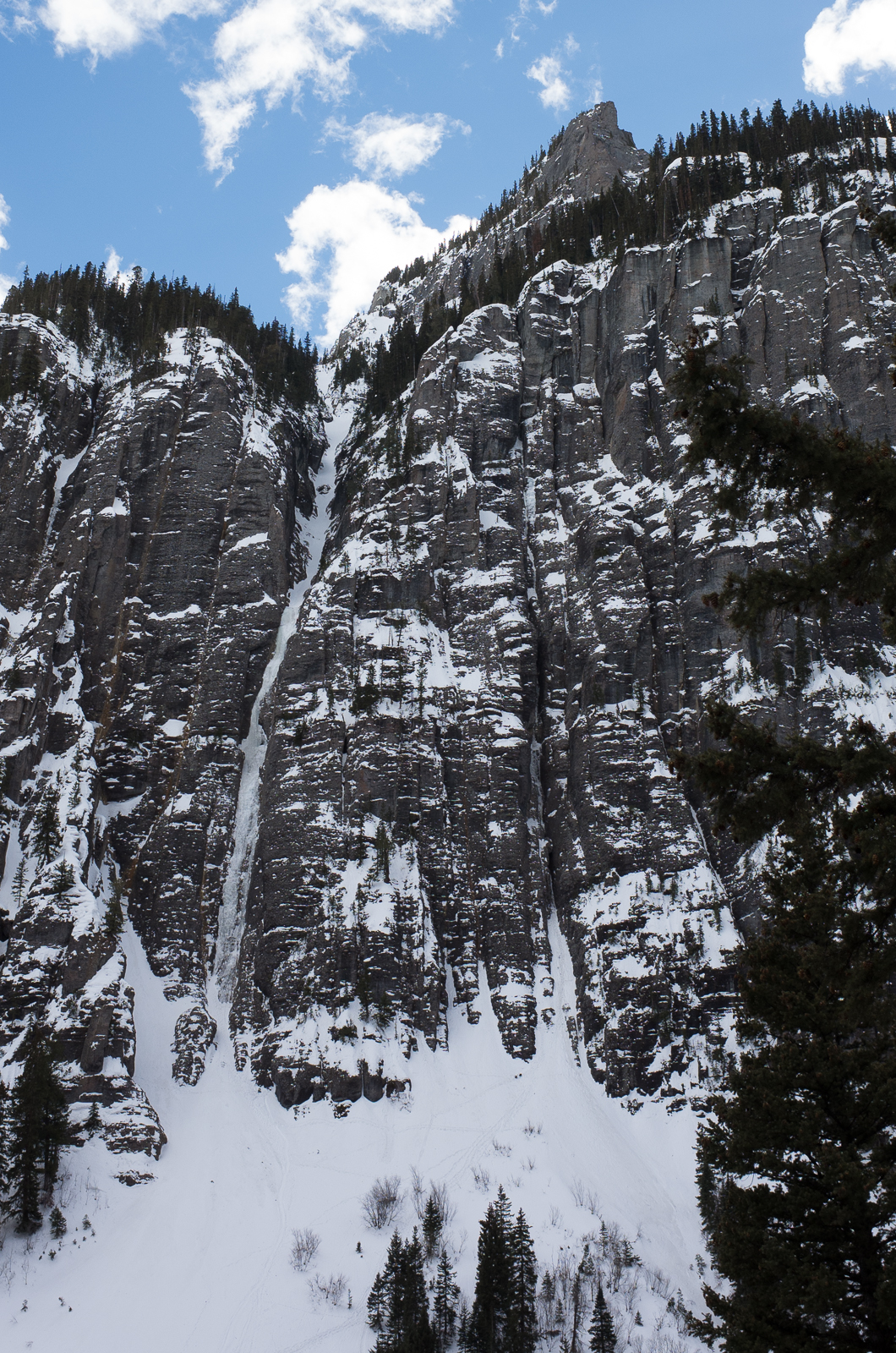 The Ribbon is the prominent ice climb on the left. Bird Brain Blvd is in the dark cleft and chimney system on the right.

I have to admit that when I heard we were going to be attempting Bird Brain Boulevard, I was pretty worried.  It’s seven pitches (1200 feet) long, and rated WI5 M6, which is significantly harder than anything I’ve climbed before.  I’ve known about this route for years.  I remember seeing pictures from the first ascent it in an old Latok Mountain Gear catalog.  It holds a somewhat mythic status in my mind.  It’s a climb that is out of my league, even on top rope, with a guide.  I spent a mostly sleepless night that night, worrying about flailing, slowing the party down, and making a fool out of myself on a route that was too hard for me to climb.  We were planning a pre-dawn start, to ensure we got on the climb ahead of any other parties, but I was awake well before my alarm went off at 4:15.

Vince picked me up a little before 5, and we drove off in the dark to the trailhead.  We were all relieved to see that there were no other cars parked there.  We would be on the route first, which would minimize objective dangers of other parties knocking rock and ice down on our heads.  We took our time getting gear ready and took it easy on the approach, waiting for the sun to come out and give us some light to climb by.  We actually started climbing about 6:00, just as it was getting light enough to see.  The climbing was steep, and I had to keep in mind what I was doing, but none of it was beyond my abilities as long as I stayed calm and focused.

At the top of the first pitch, Vince and Ollie had already gone ahead and I was bringing up the rear, breaking down the belay anchors.  I unclipped the clove hitch that tied myself to the anchor, and was reaching out to unscrew an ice screw that was last remaining piece of the belay anchor, when my feet sheared through the snow, and I pitched right off the belay ledge.  I felt like a complete moron.  I’d climbed steep ice and rock up to this point without falling, but somehow managed to fall off of the belay ledge.  Luckily, I was on a top rope, and the only thing injured was my pride, so I climbed back up to the ledge, retrieved the ice screw, and proceeded up the climb, a little shaky from some extra adrenaline in my veins. 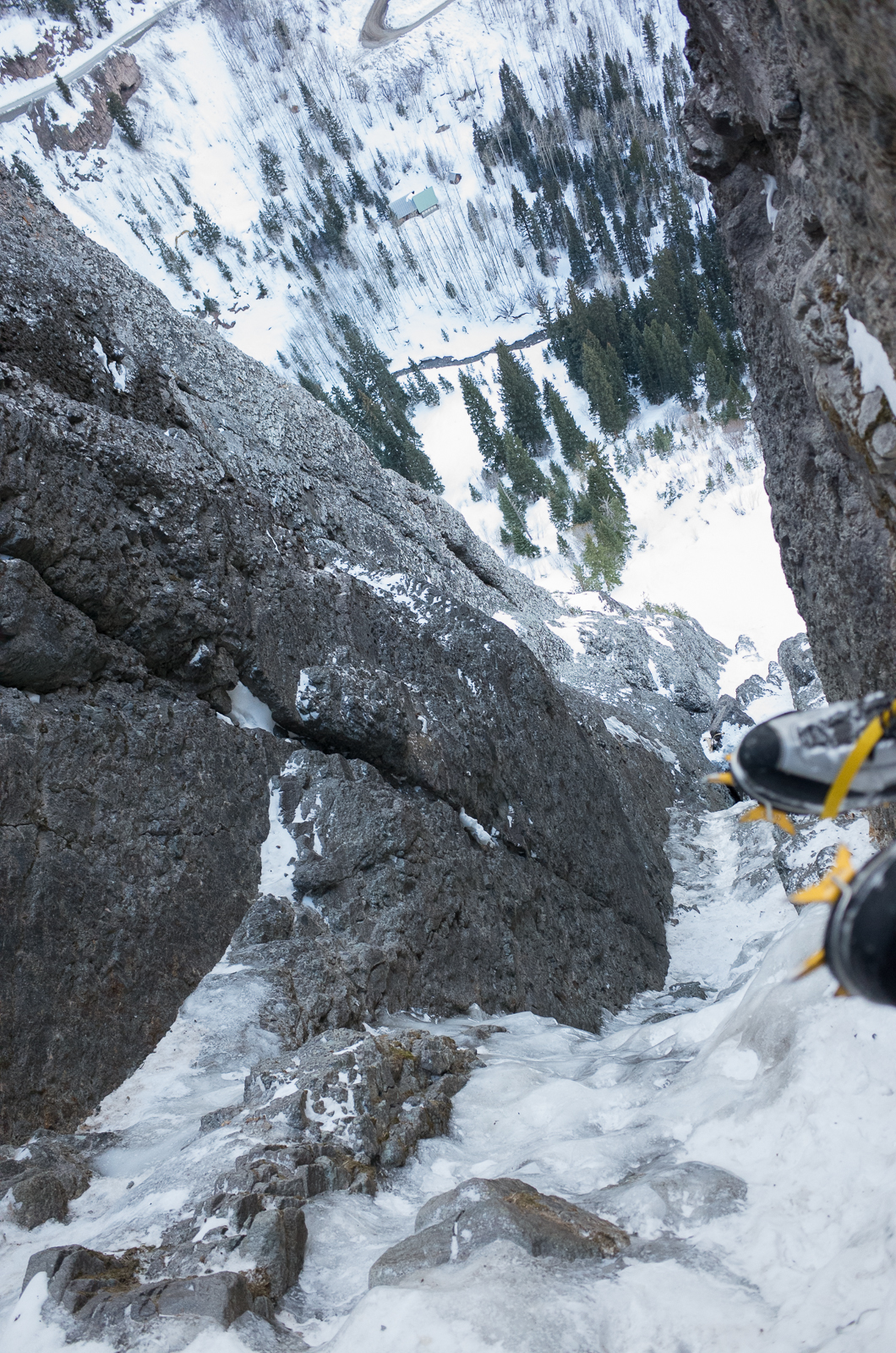 The view down the climb from the belay ledge.

The climbing all along the route was pretty sustained.  Every pitch had some part of it that made me wonder if I could do it.  However, I just kept thinking back to the training of the previous two days:  “Place the tool.  Test it.  Believe in it?  Then trust it.”  “Keep your picks and your crampon points quiet and still once you place them.”  “Always keep in mind the direction of pressure when you choose a crampon point placement on rock.”  Find a crack and torque the pick.”  Vince and Steve’s coaching was fresh in my mind, and kept me progressing steadily upward from one section to the next. 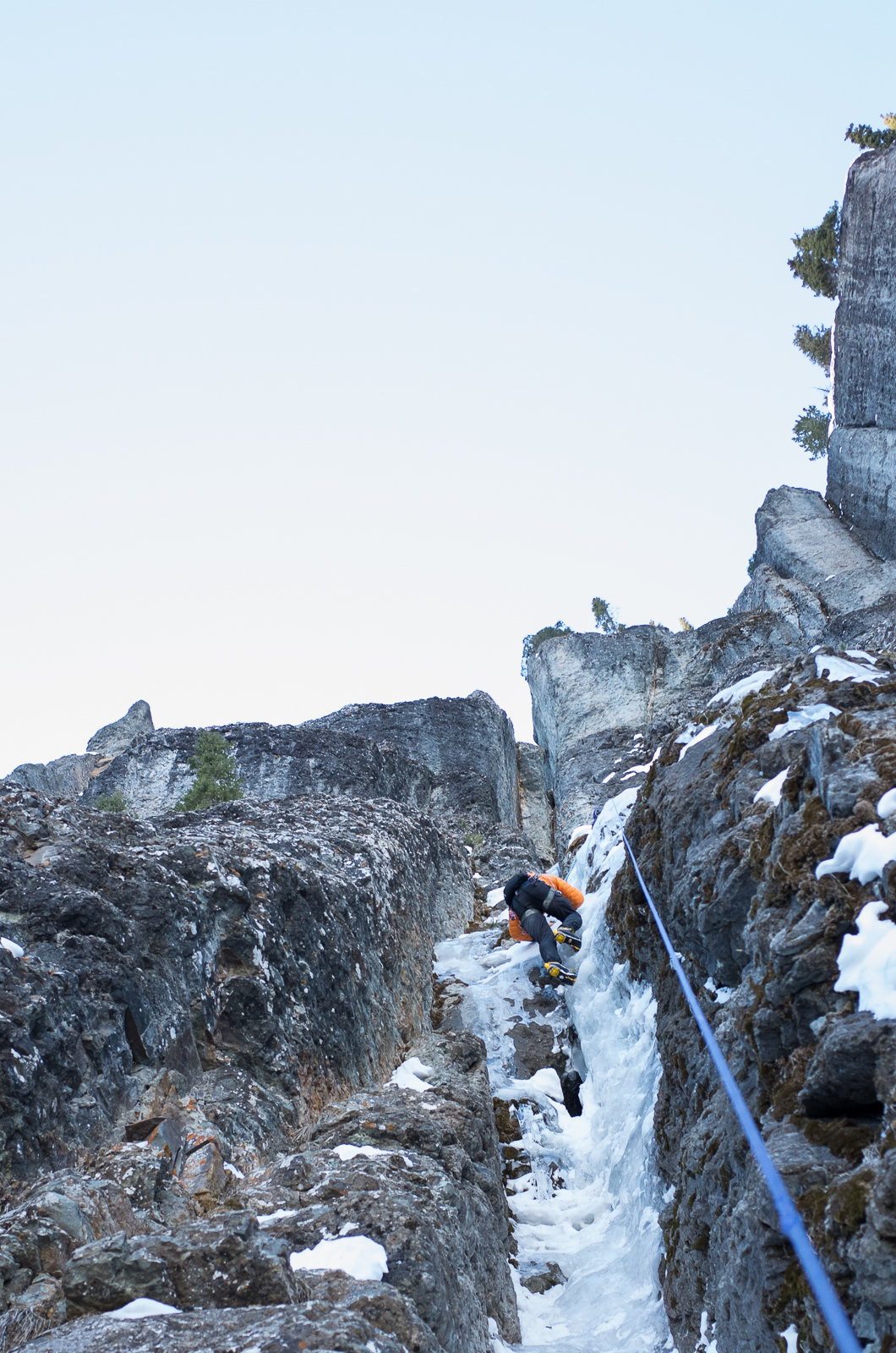 Oli, on one of the steep ice sections, headed for the chimneys.

The most tenuous part of the climb was a section that was mostly devoid of ice, and required stemming on bare rock up to a lip that had some  frozen moss that would take (gentle) sticks.  The most strenuous parts of the climb were a series of squeeze chimneys, where I had to wriggle up, thrutching my way higher, with my back pack dangling below me hung from a runner, wishing I wasn’t quite so thick. 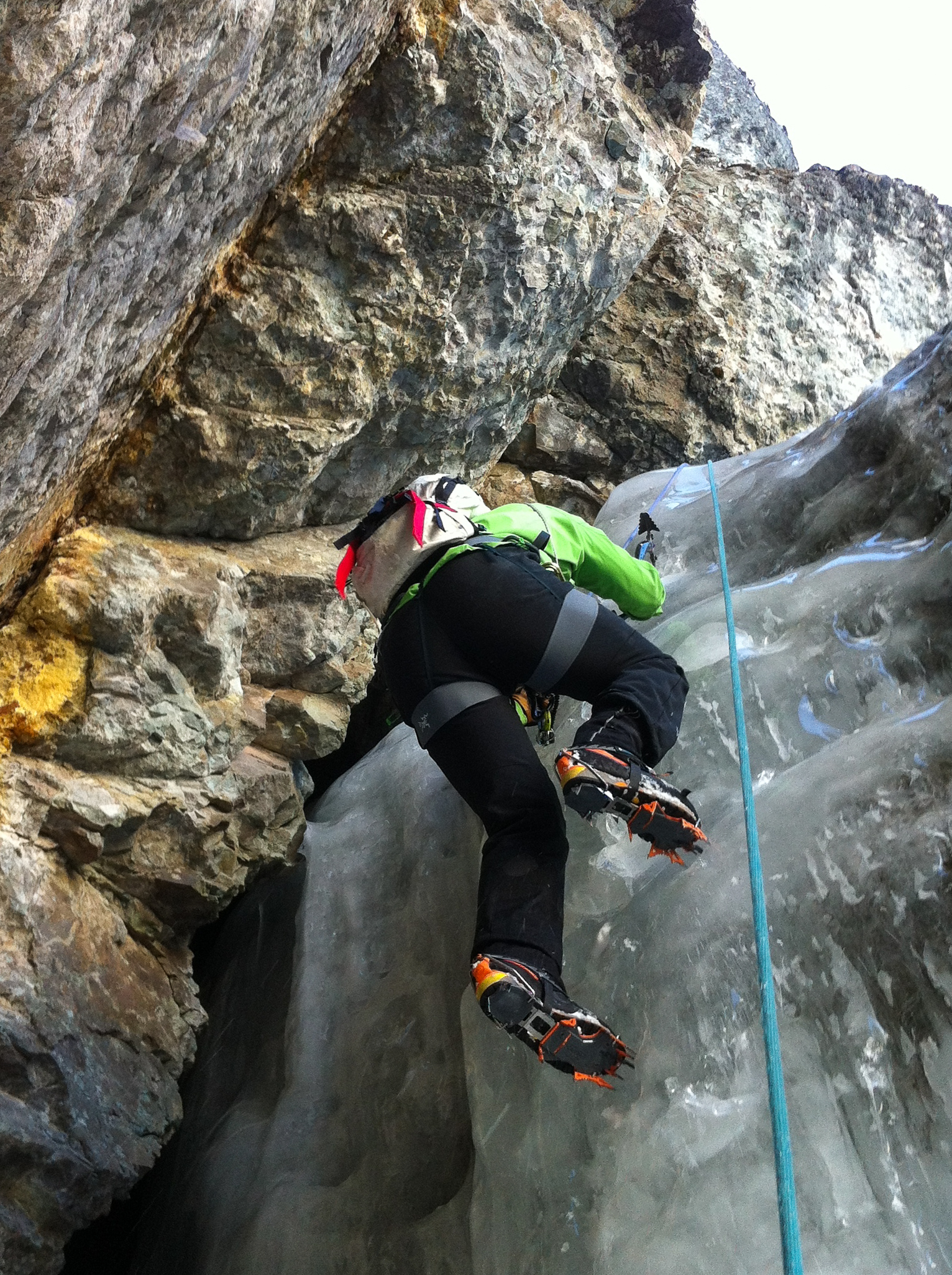 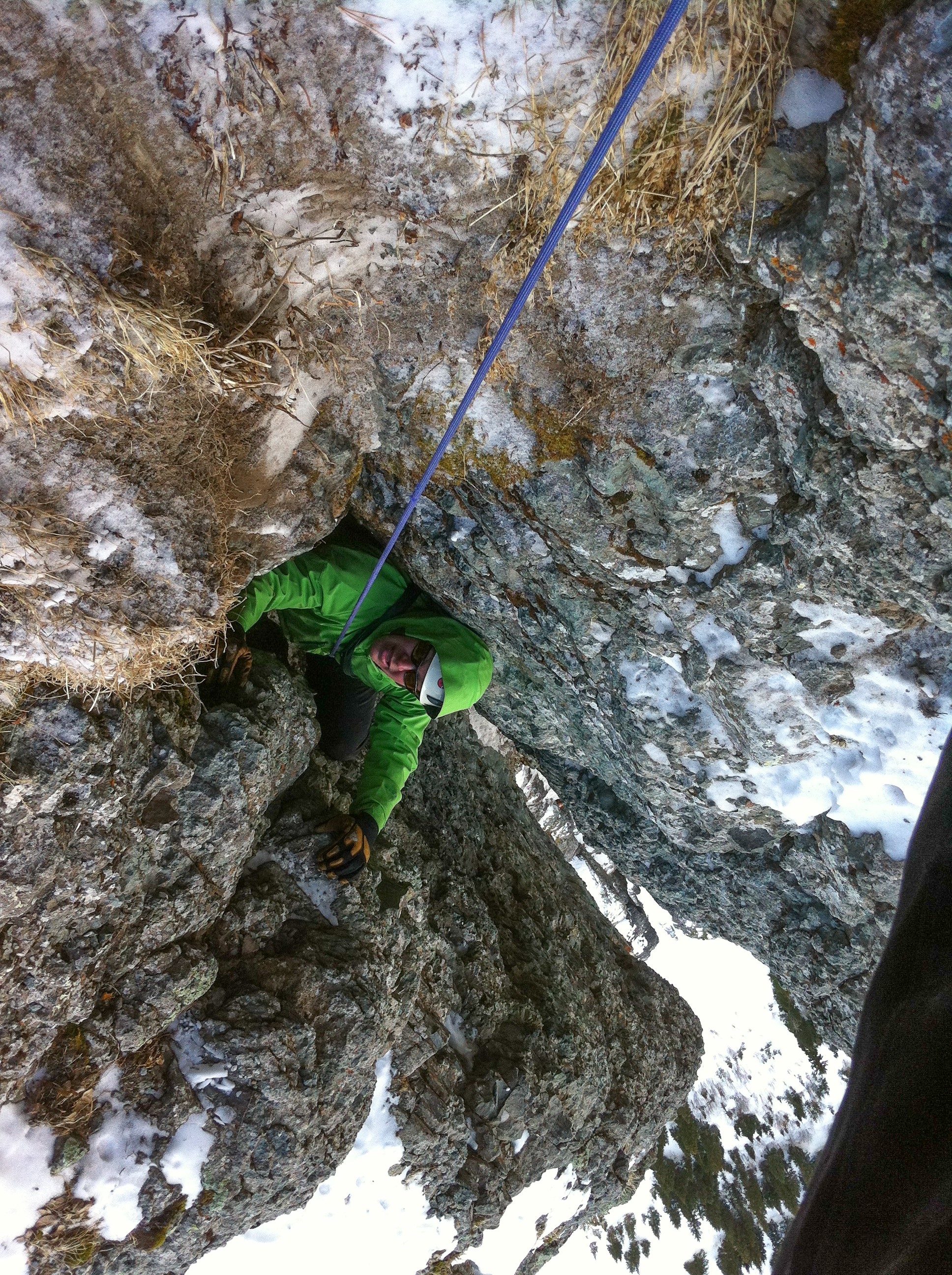 Wriggling up a chimney on Bird Brain Blvd 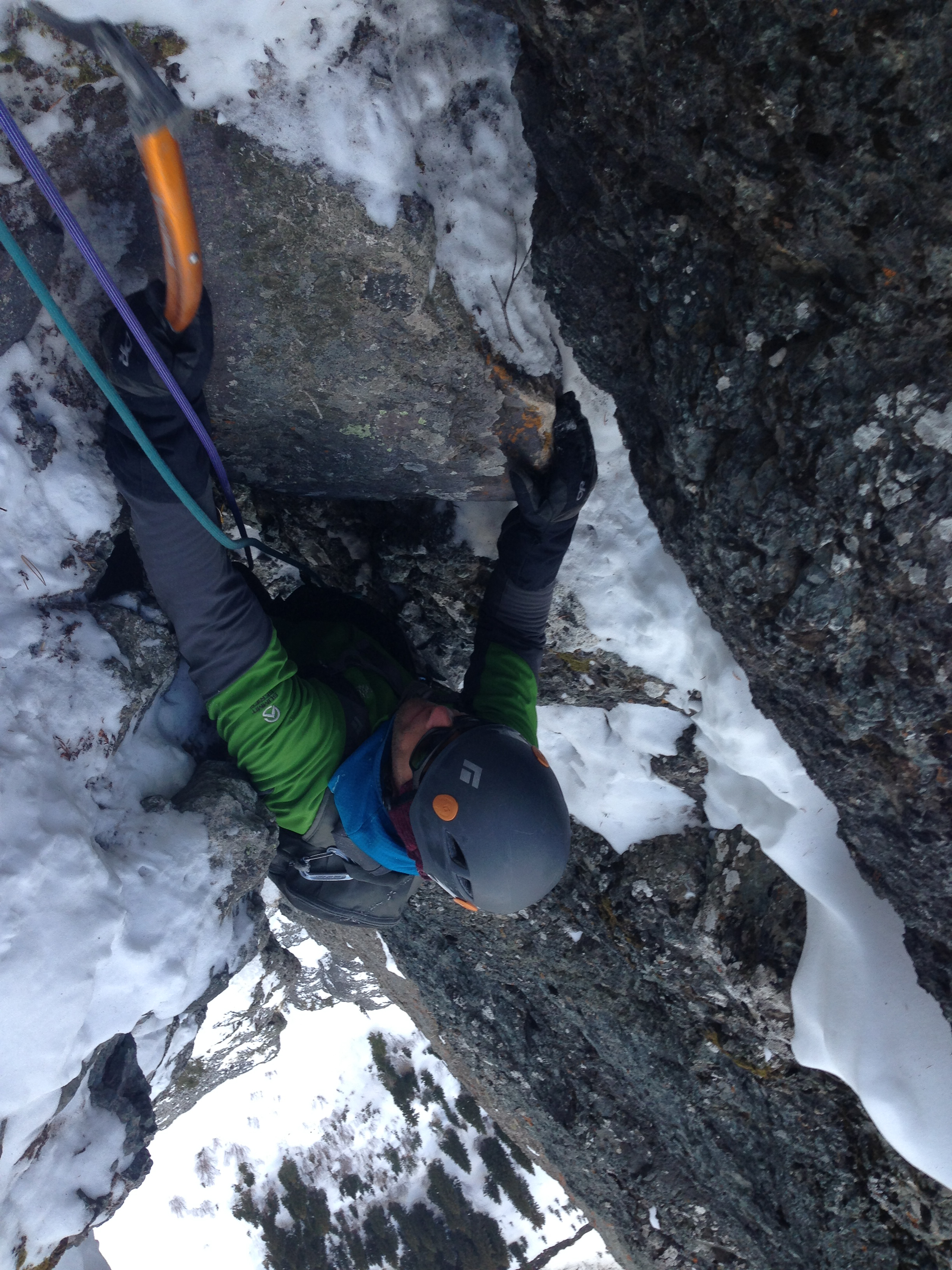 Oli, pulling over a lip on Bird Brain Blvd

Finally, we topped out, and then traversed and rappelled our way over to the Ribbon, where there is a series of fixed rappel stations.  I was worried that our ropes were going to get stuck in the trees along the rappel route, but we managed to avoid that hassle.  We got back to the car without incident, a little after 1:00 in the afternoon, which was a respectable time for a guided group of three people.   (I was glad to only have to use my headlamp for the approach, not the descent.) 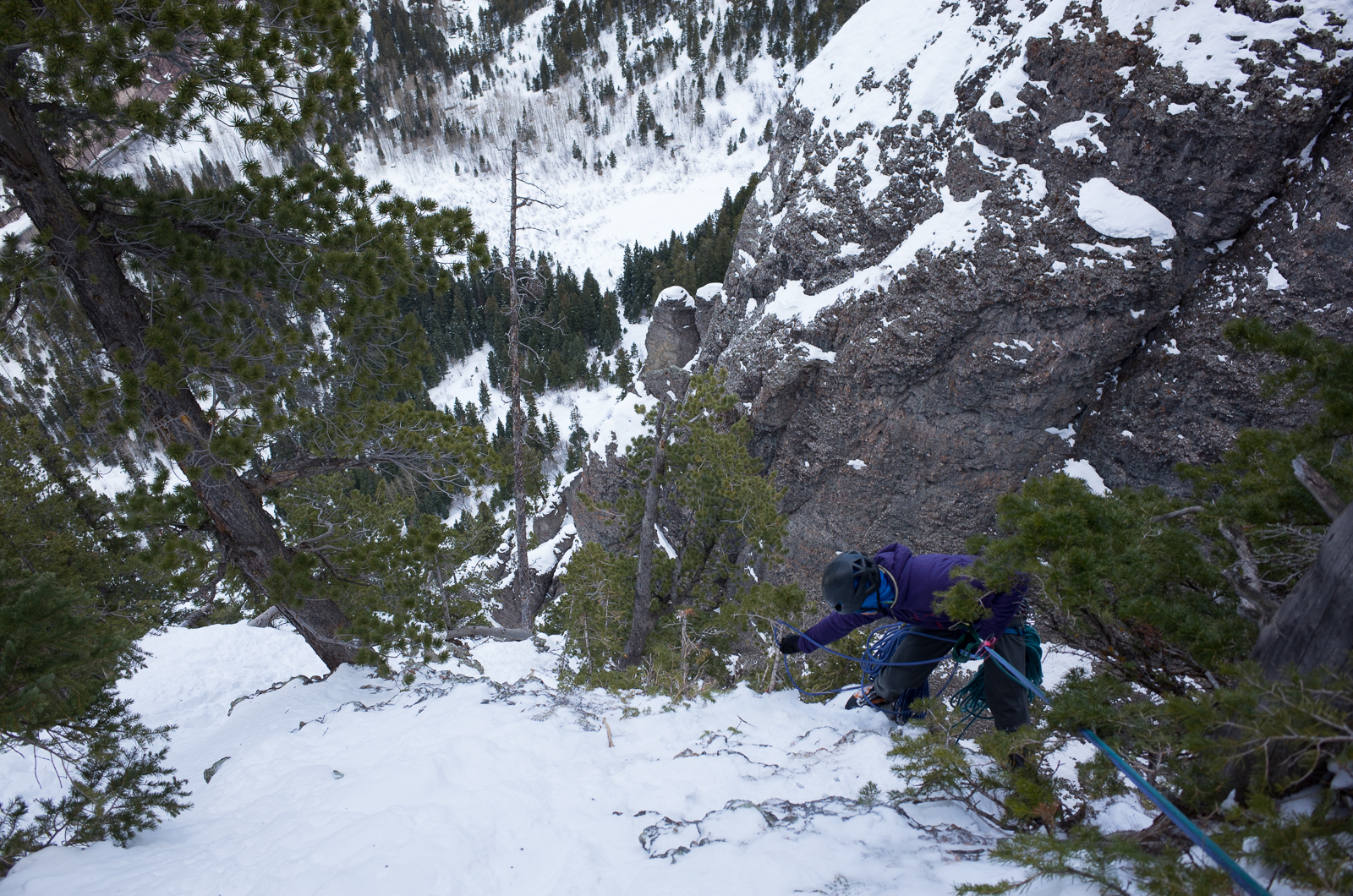 Vince Anderson, navigating through trees on our rappel down to the Ribbon.

I was really happy with how things had gone.  Other than my ignominious tumble off of the belay ledge, I’d managed to climb the route with no falls and no hanging on the rope, which was certainly better than I had feared.  It was the perfect end to a terrific three days.  I went back to town, soaked in a hot tub for a while, then met up with Steve and the rest of the group for an early dinner/late lunch at the local brew pub.  (Vince had headed back home to take care of some business.)    We chatted and ate, and then I finally said goodbye to my new friends.

The workshop exceeded my expectations on all levels.  I can’t think of a better way to tune up my alpine climbing skills than to spend three days with Vince and Steve, learning from the best in the business.  It was truly a terrific experience, and I’m already dreaming about climbing with them again.