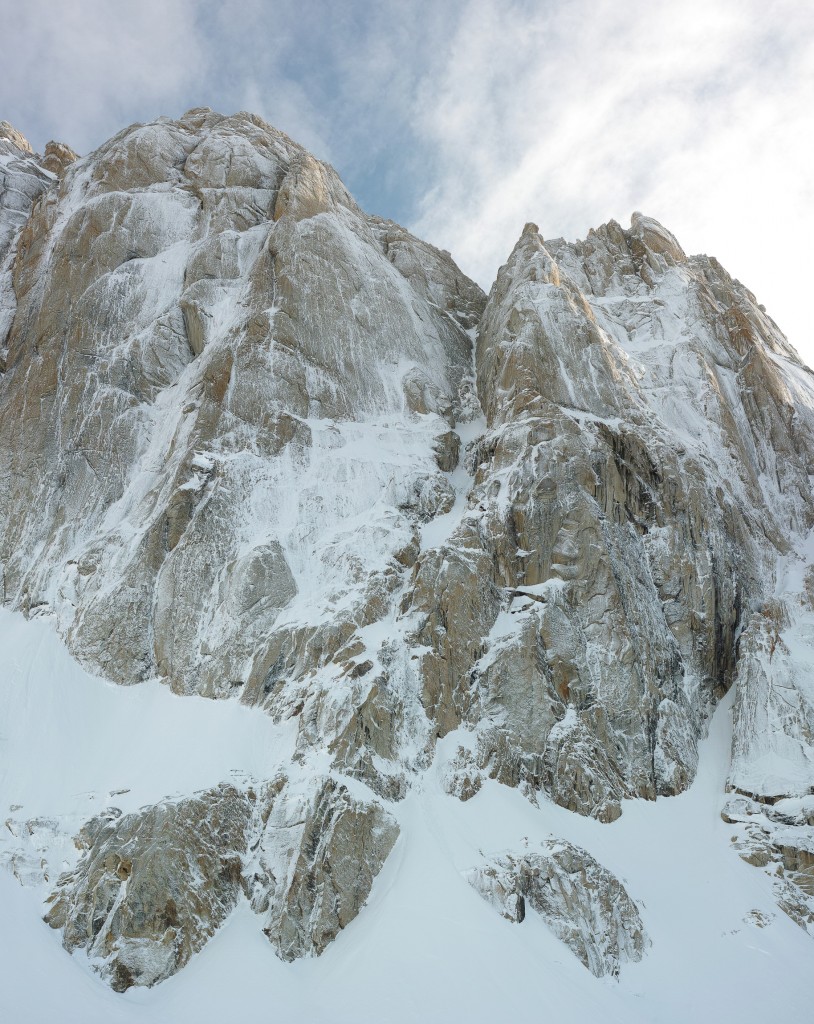 The Moose’s Tooth. The Ham & Eggs route follows the prominent couloir up the center

In 2014, I had a trip to Alaska planned, to climb the Ham & Eggs route on the Moose’s Tooth.  However, icefall closed down the glacier landing access, and the trip got cancelled.

I scheduled another trip to Moose’s Tooth for May of 2015, and kept my fingers crossed, hoping for good conditions.

The trip was a guided trip, through Skyward Mountaineering, the guide service owned by Steve House and Vince Anderson.  The participants were me, another client named Joe, and our guide, Buster.

The three of us met May 4th at the airport in Anchorage.  We rented a car, bought a bunch of food, then drove to Talkeetna. 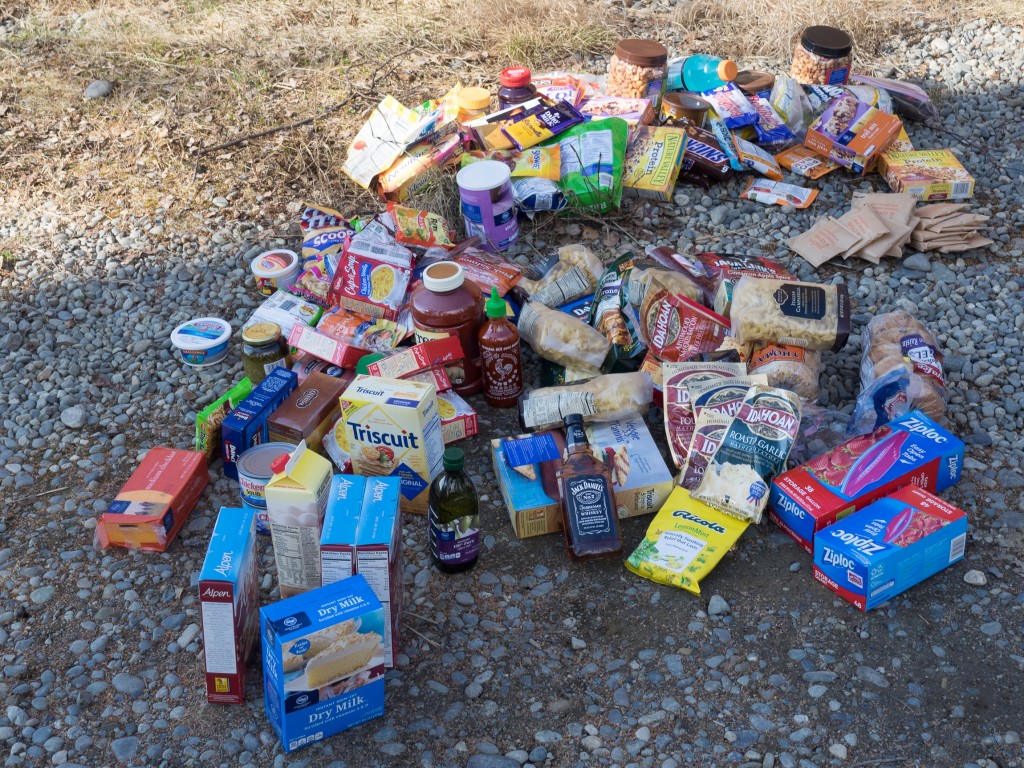 Food and supplies for our Moose’s Tooth Climb

Talkeetna is a small tourist town that owes its existence mostly to the fact that it’s the jumping off point for Denali and other mountains in the Alaska Range.  It’s home to several air services that fly planes into the mountains, including our service, Talkeetna Air Taxi. 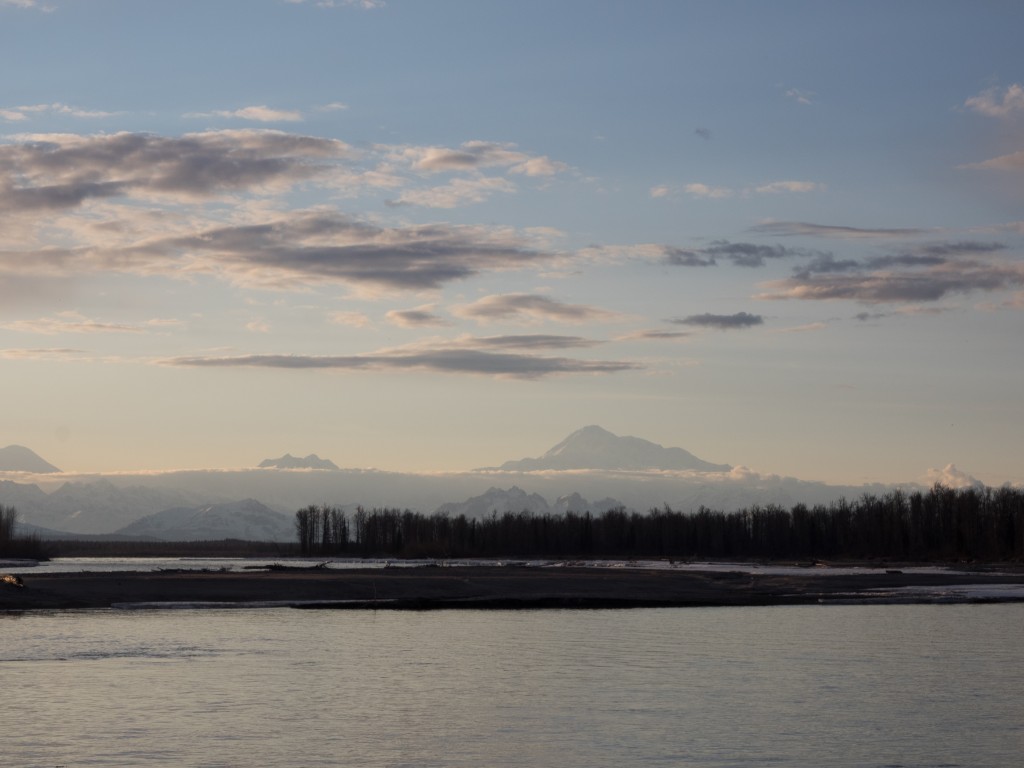 View of Denali from Talkeetna

We spent the night at the Talkeetna Air Taxi bunkhouse, and then packed up and went to the Talkeetna Air Taxi office at the airport, where we loaded up our stuff into a beautiful 1950’s vintage Dehaviland Beaver and flew to the Root Canal Glacier at the foot of the Moose’s Tooth.   As the prize for winning an epic game of Paper Scissors Rock, I won the opportunity to sit in the front seat next to the pilot. 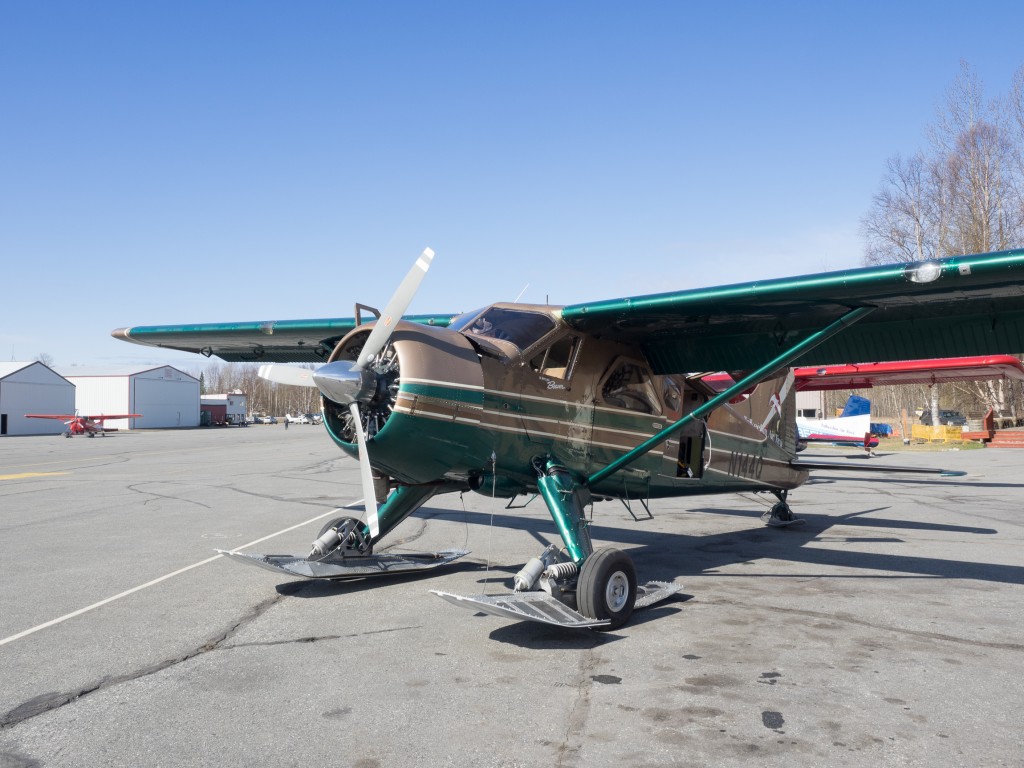 Our ride to the Root Canal Glacier, a vintage Dehaviland Beaver 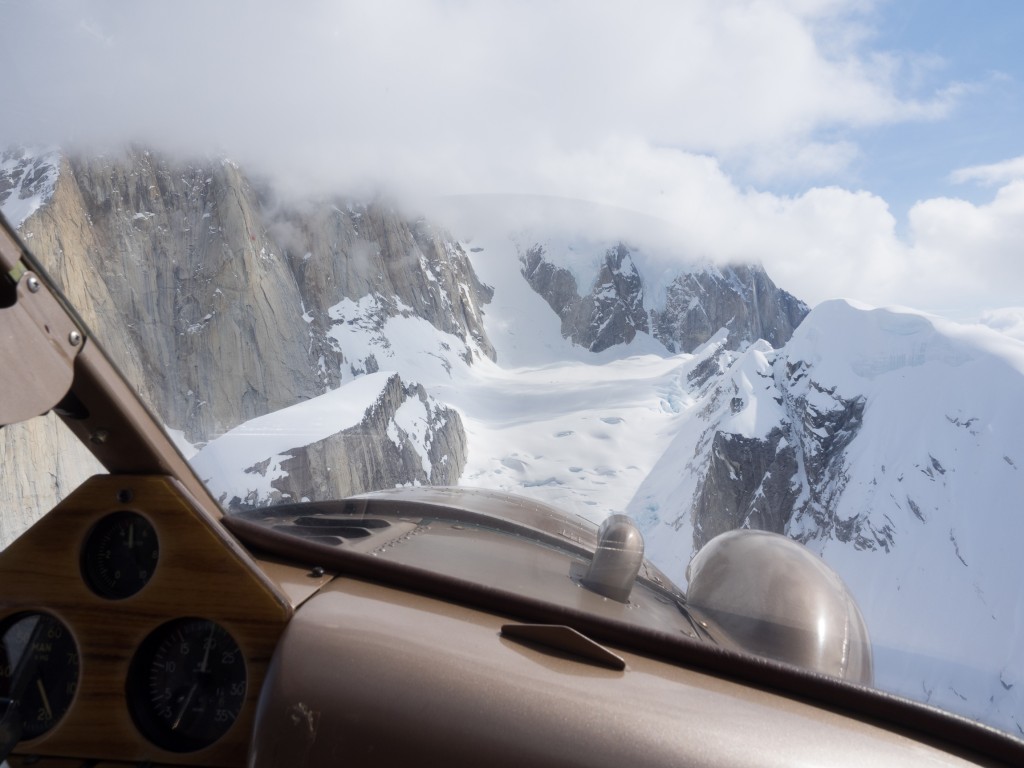 The flight was amazing.  Once we got over the Alaska Range, the scenery was breathtaking in every direction.  I was a little bit nervous about the glacier landing, but it turned out to be more smooth than most landings on a runway. 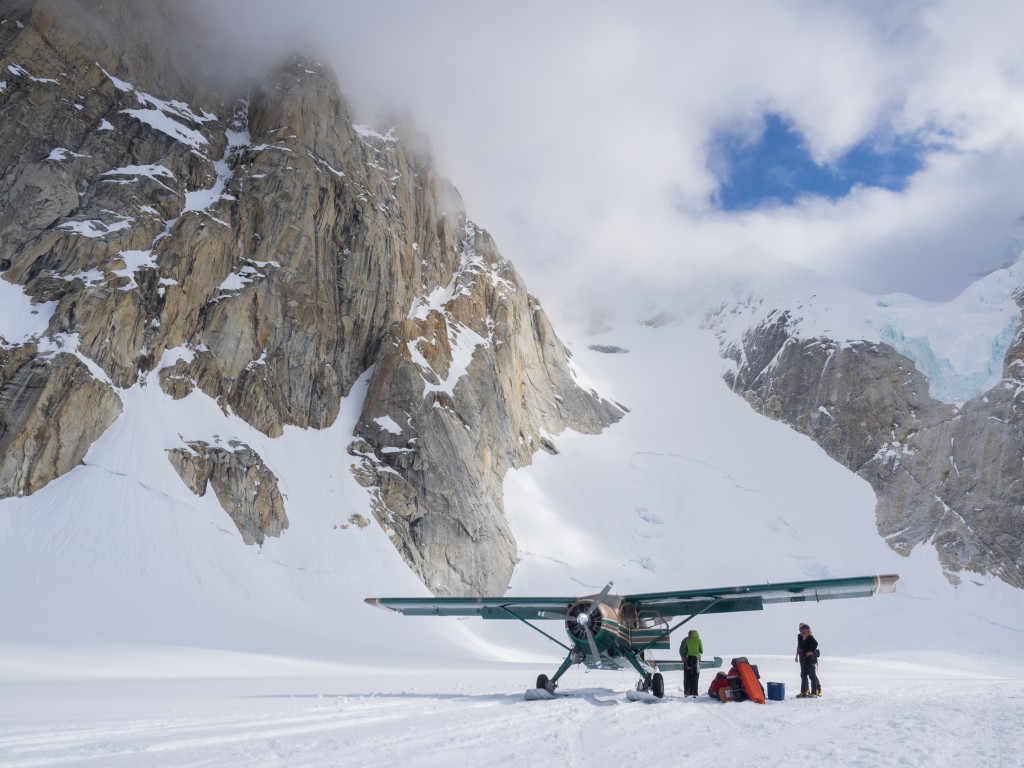 The Beaver, with the Moose’s Tooth in the Background

We emptied our stuff out of the plane, and a group of folks who had been on the glacier traded places with us and the plane whisked them away, lifting off of the glacier in what seemed to be a very very short distance.

We set up camp, ate dinner, and prepared for the climb.  The weather window looked good for the next day, so we planned on waking up at 4:00 and heading out to climb the route. 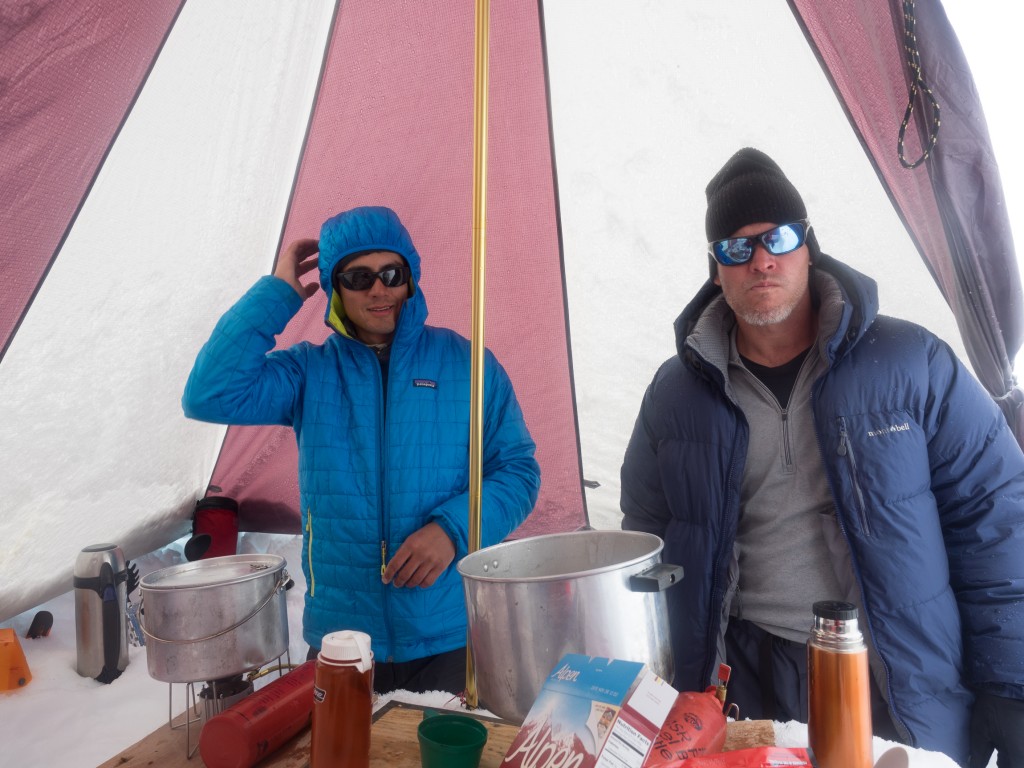 Buster and Joe in the Cook tent Megamid

View of Denali from our Camp

It never really got very dark that night, but I slept pretty well anyway.  We woke at 4, and left camp at 5.   We short roped up the initial snow sections, and then began pitching it out beginning with a mixed section that was mostly rock.  The climbing was fun here, scratching up granite with ice tools and crampons, occasionally using gloved hands to grasp rock features.  After the mixed section, we traversed down and right and established ourselves in the main couloir. 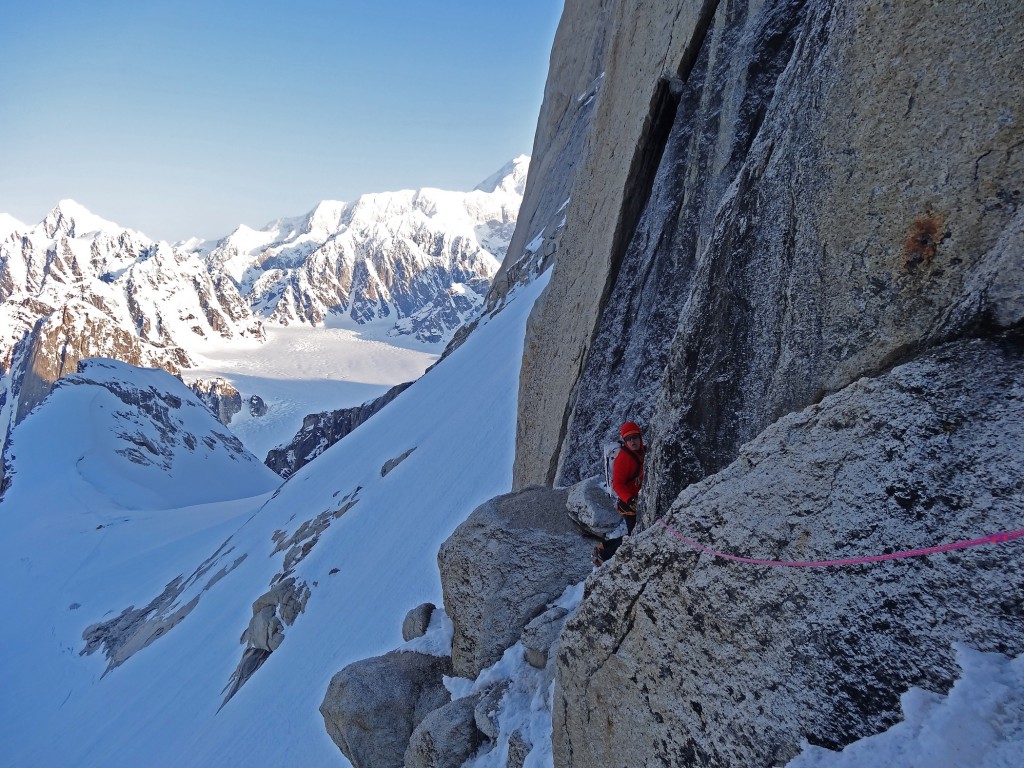 Traversing into the Ham & Eggs couloir

The climbing from here on out was a relatively straightforward mix of neve and water ice of varying steepness.  There were a number of bulging sections of steep ice that presented a good challenge, particularly for Buster who was leading them, because the steeper sections of the ice tended to be somewhat aerated and rotten.  In a couple of spots I worried that if he fell, the screws might not hold his fall.  However, he pretty much crushed everything, cruising up the steep ice in a fluid, controlled style. 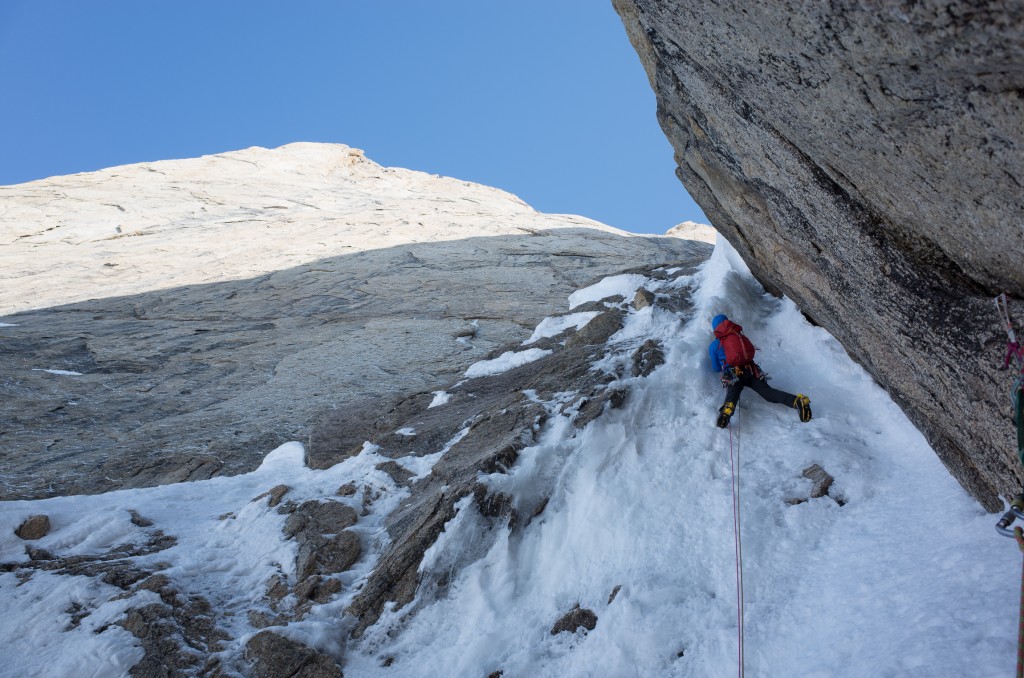 Lots of spindrift mixed with ice poured down on us as we climbed.  We pulled our hoods up over our helmets to keep our jackets from filling up with snow.  On several occasions, I would pull up over a lip, and get a steady stream of snow and debris in my face.  In spite of the perfect weather, the spindrift gave the climb an alpine feel. 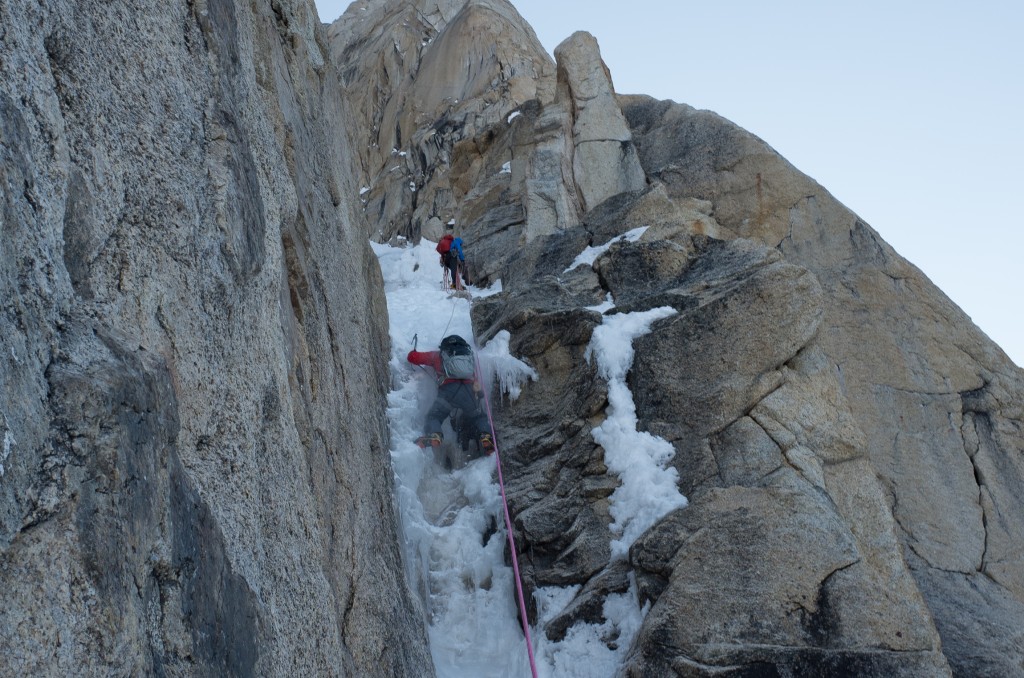 Joe and Buster on one of the ice steps

The view looking across the valley from high on Ham & Eggs

We were making good time, and had reached 9000 feet, having passed the two crux sections, when I got hit by falling ice.  Joe was belaying, and I was just hanging out and relaxing when I got whacked.  The ice glanced off my helmet and impacted my neck and upper shoulder.  I blacked out for just a moment, and my whole body felt like it was being poked with pins or electricity.   Joe asked me if I was OK, and I told him that I didn’t think I was OK.   I was dizzy, and was having a hard time moving my neck.  I could turn it to the right and look down, but looking up or turning it to the left hurt a lot.  I was having trouble with my left arm too, and couldn’t use it very well.  I felt like I was on the deck of a moving ship, and things around me seemed to be moving up and down a bit.

After a short while, Buster rappelled down to check on my condition, and by the time he got there, I was nauseous.  I kept retching and dry heaving, but my stomach was pretty empty and I didn’t have anything to throw up.  I took a sip of water.  (And later found out that I had put my water bottle back in my pack without the lid on.)

I felt pretty awful, and Buster wasn’t keen on dragging me up an Alaskan corniced ridge while I was dizzy and shaken up, so we decided to head down.  It took us about 4 hours to rappel to the base of the route.  By the time we got to camp, I was feeling somewhat better, but had a really really sore neck and shoulder.

I felt pretty bad that we hadn’t been able to tag the summit.   I felt especially bad for Joe and Buster, as my injury had messed up their chances to reach the top.  It was the first time that an injury had prevented me from continuing on a climb.  If we had been able to get to a sheltered spot and allow me to rest and recuperate for an hour or so, I might have been able to continue, but there wasn’t really any good spot to do this out of the line of fire from more falling ice.

We got back down to camp about 12 hours after we had left, only to find that it had been ransacked by ravens.  The crafty birds had opened the zippers on our duffel bags, and had spread the contents about.  After dealing with the raven damage, I took 4 ibuprofen tablets and crawled into my sleeping bag.  We figured that after a rest day, we’d have another shot at the route. 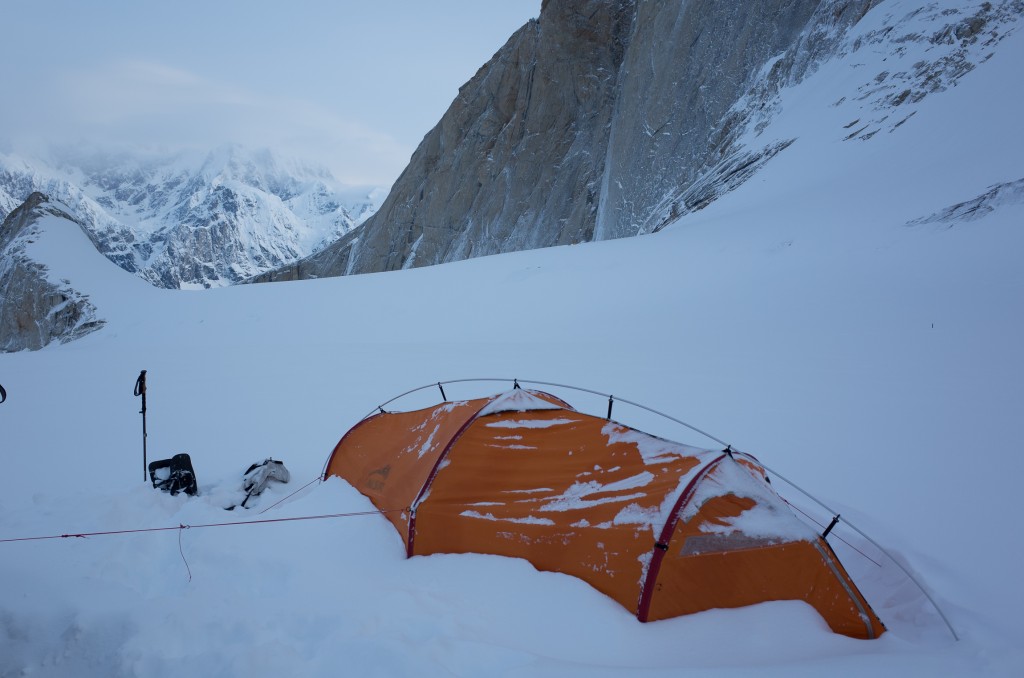 However, the weather did not cooperate.  It started snowing that night, and snowed heavily and continuously for most of the next five days.   We spent our time sleeping, talking, eating, and digging a snow hole.

After days of snowfall and watching sluffs avalanche down the route, we realized that we were not going to get another shot at climbing Ham & Eggs.  We turned our efforts towards getting off the glacier.  We’d go and stamp out a landing zone runway for the airplane, only to see our work covered up by more fresh snow.  We dug our tents out, ate, and tried not to get too bored.

Finally, the weather cleared enough for the planes to fly again.  We stamped out a runway and were rewarded by the sight of a Dehaviland Otter coming to rescue us from our basecamp existence. 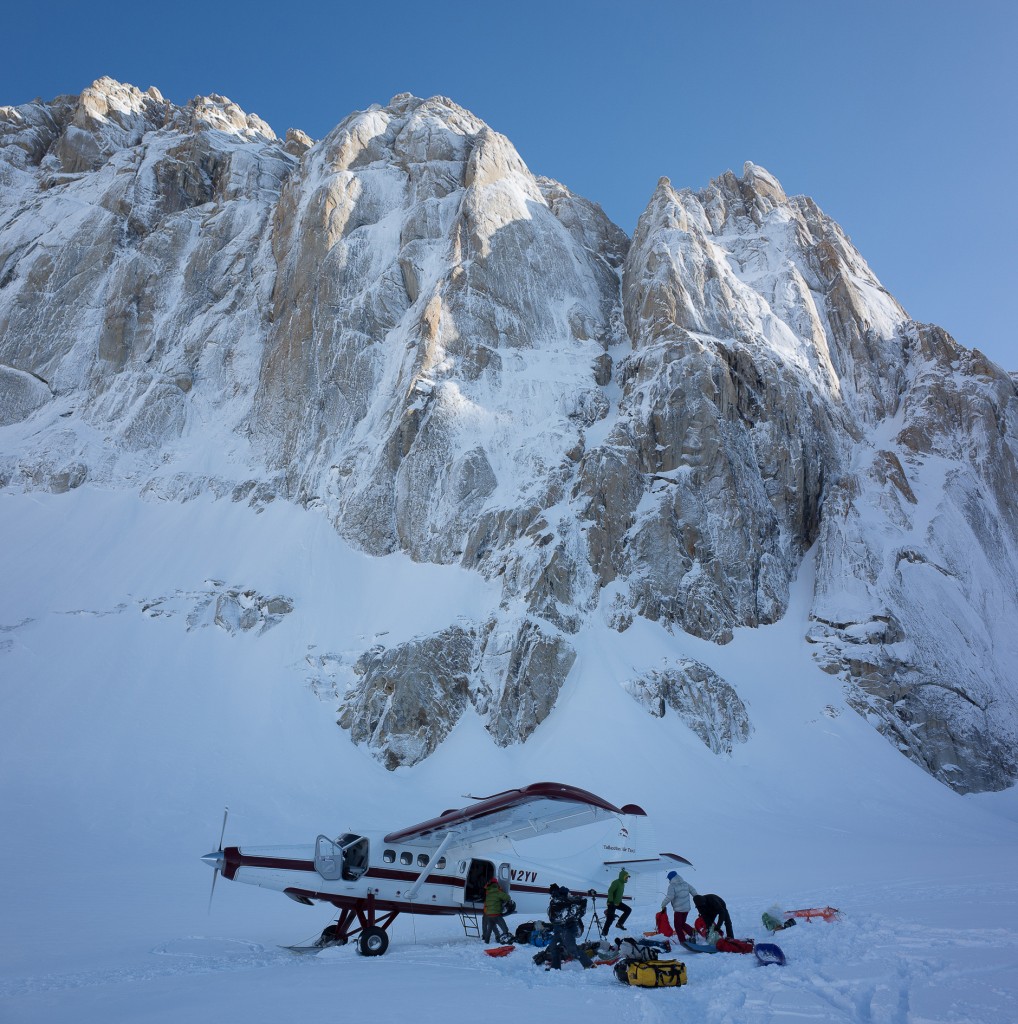 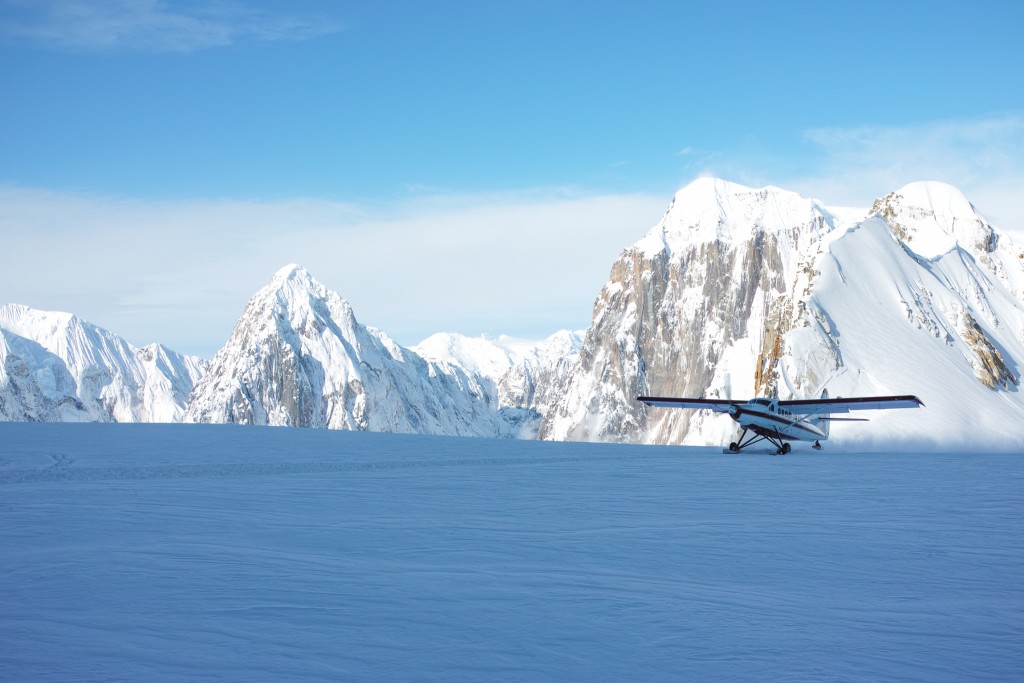 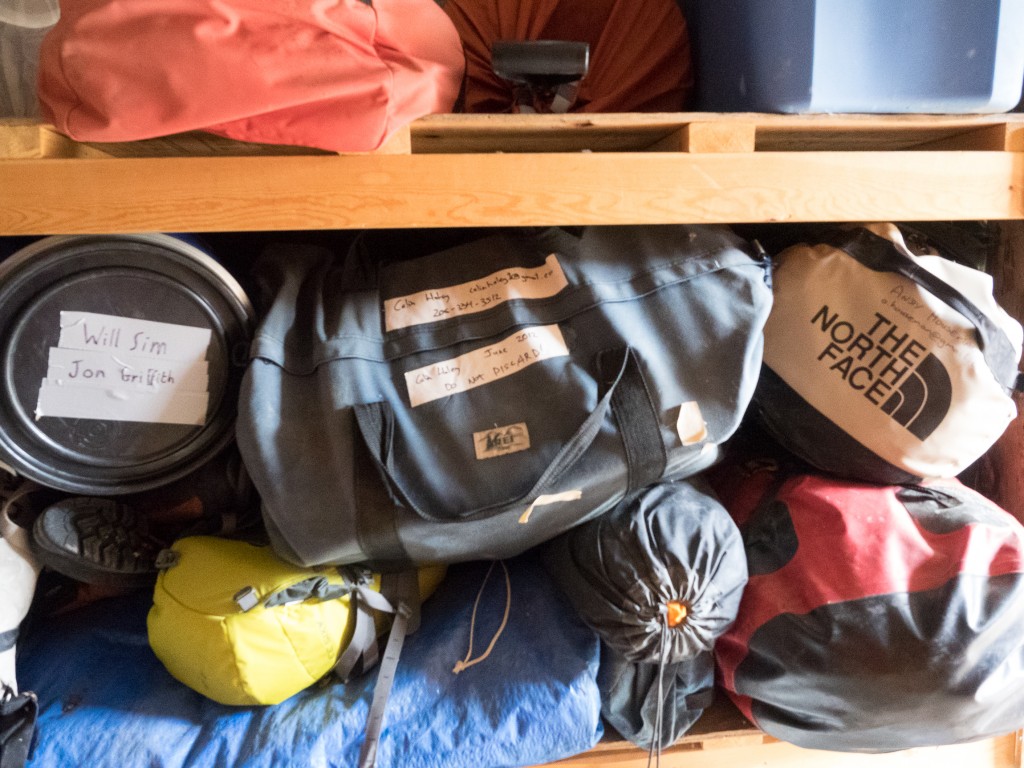 Overall, it was a great trip, in spite of the fact that I didn’t make it to the top of the Moose’s Tooth. Several weeks after the trip, my neck is still a bit stiff, but I’m otherwise fully recovered from my injury, and ready to do some more climbing.   The trip really whetted my appetite for Alaskan climbing, and I hope to return to the Alaska Range some day.  Until then, I will have to satisfy myself with objectives closer to home.