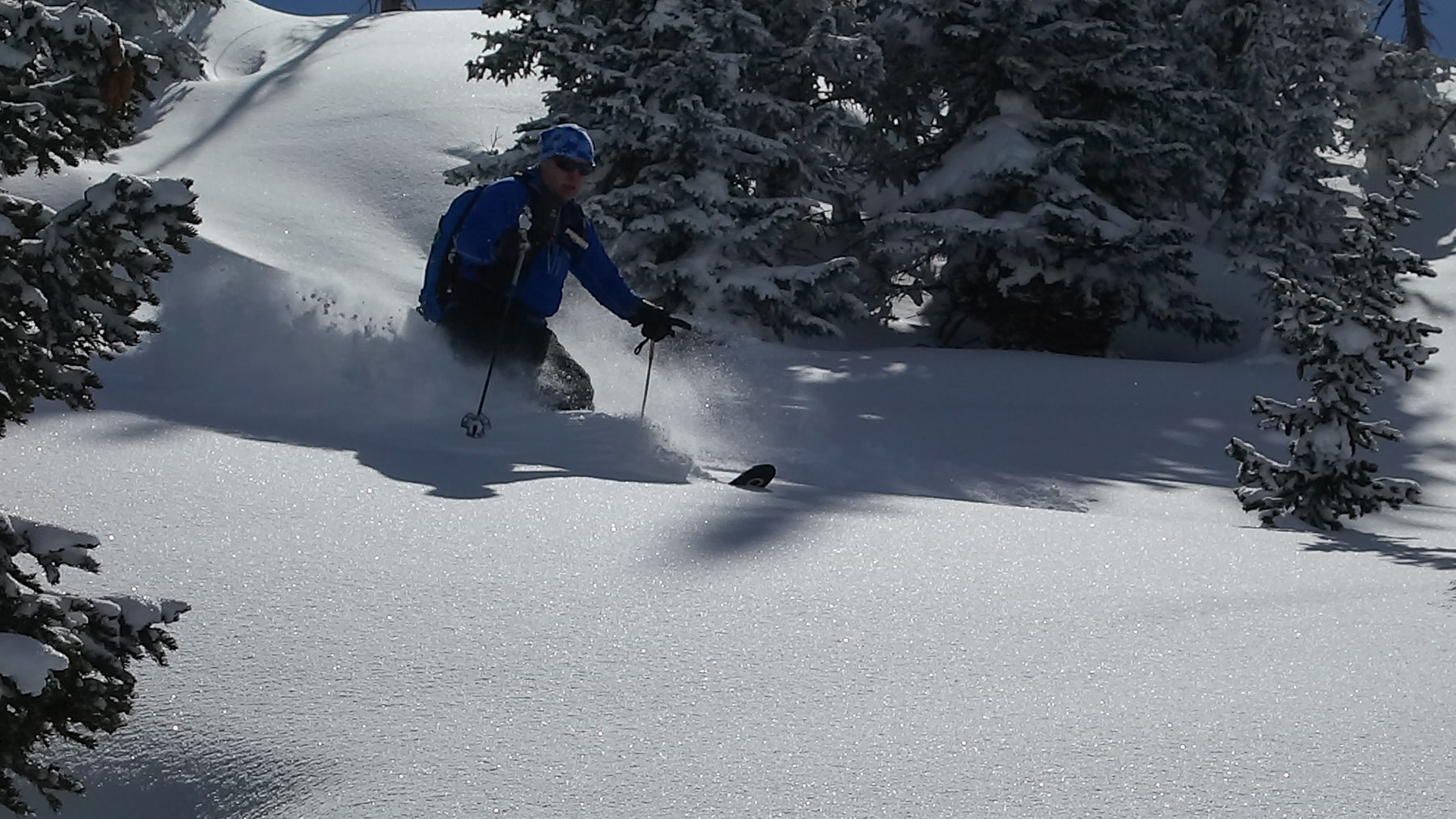 Fresh powder in the Teton backcountry

For the past three years, me and a group of friends have done a backcountry ski tour together. Last year, we did a Sierra tour, and the year before, we did a tour in the Tetons. This year, we got back together, but rather than do a point to point traverse, we decided to rent a yurt to use as a base camp, and do day trips out from the yurt. I’ve done a fair amount of backcountry skiing, but up until this trip, I had never stayed in a backcountry yurt, I’ve always slept in a tent or a snow cave.

The yurt we chose was the Baldy Knoll Yurt, in the Teton backcountry, run by Teton Backcountry Guides.  We were there the third week in March. The first day of our trip was mostly spent driving to Victor, Idaho, on the Wyoming border, and then skinning up to the yurt.  The climb up to the yurt was a long, steady uphill grind that took us about 4 hours. We probably could have gone faster, but we were carrying very heavy packs (or pulling a heavy sled, in my case.) Not long after we started skiing in, it began to snow heavily, which was a portent of good things to come. We had a guide who took us to the yurt, and showed us how everything works. After that, he left, and we were on our own. 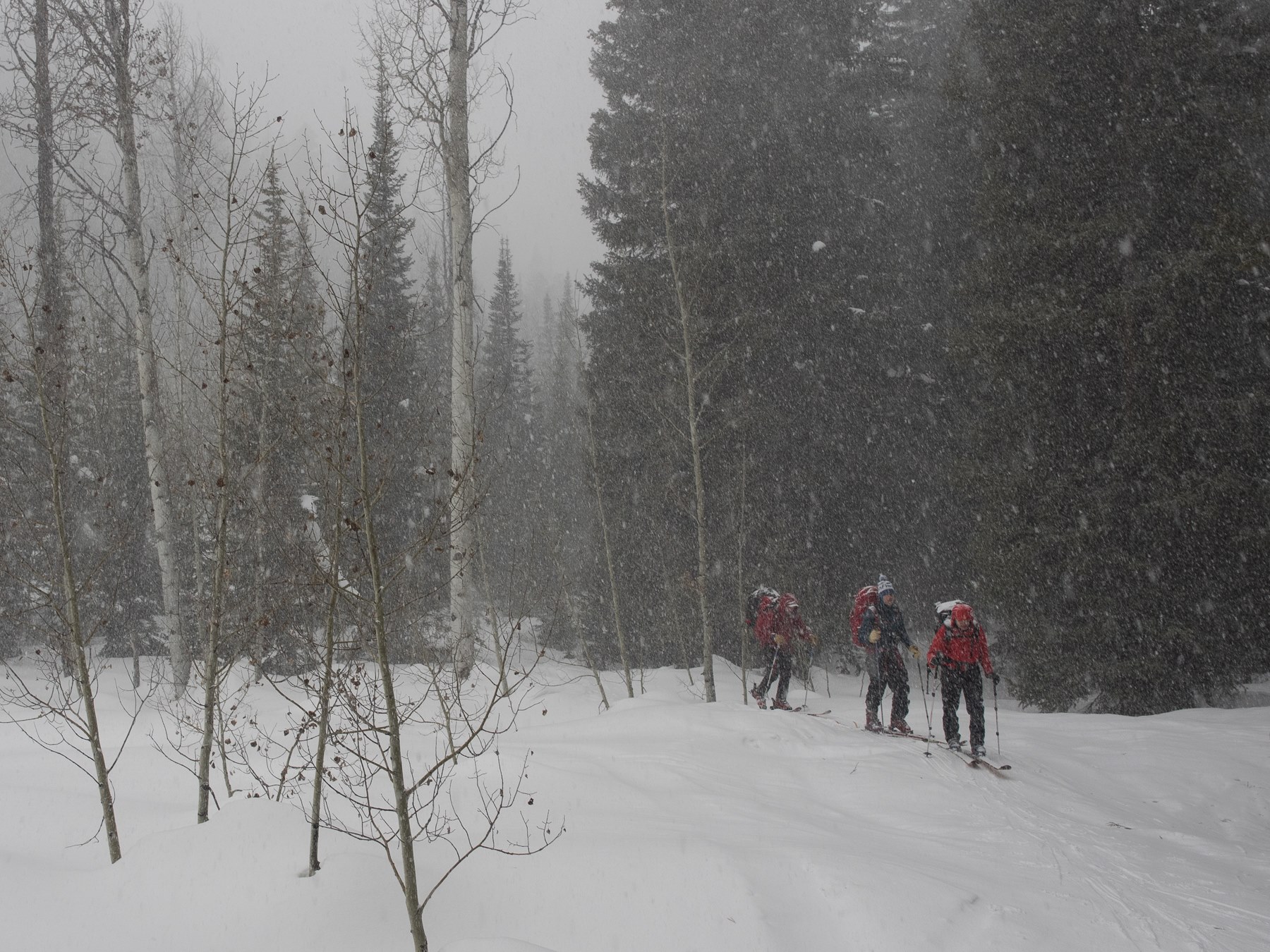 Skinning in to the yurt in heavy snow fall

The yurt is pretty comfortable, especially when compared with a tent. It has a wood burning stove for heat and melting snow for water, and a two burner gas stove for cooking, along with pots, pans, and cooking utensils. There are gas lights. 3 bunk beds and 2 cots for sleeping. A covered outhouse nearby.  Overall, about what I expected. 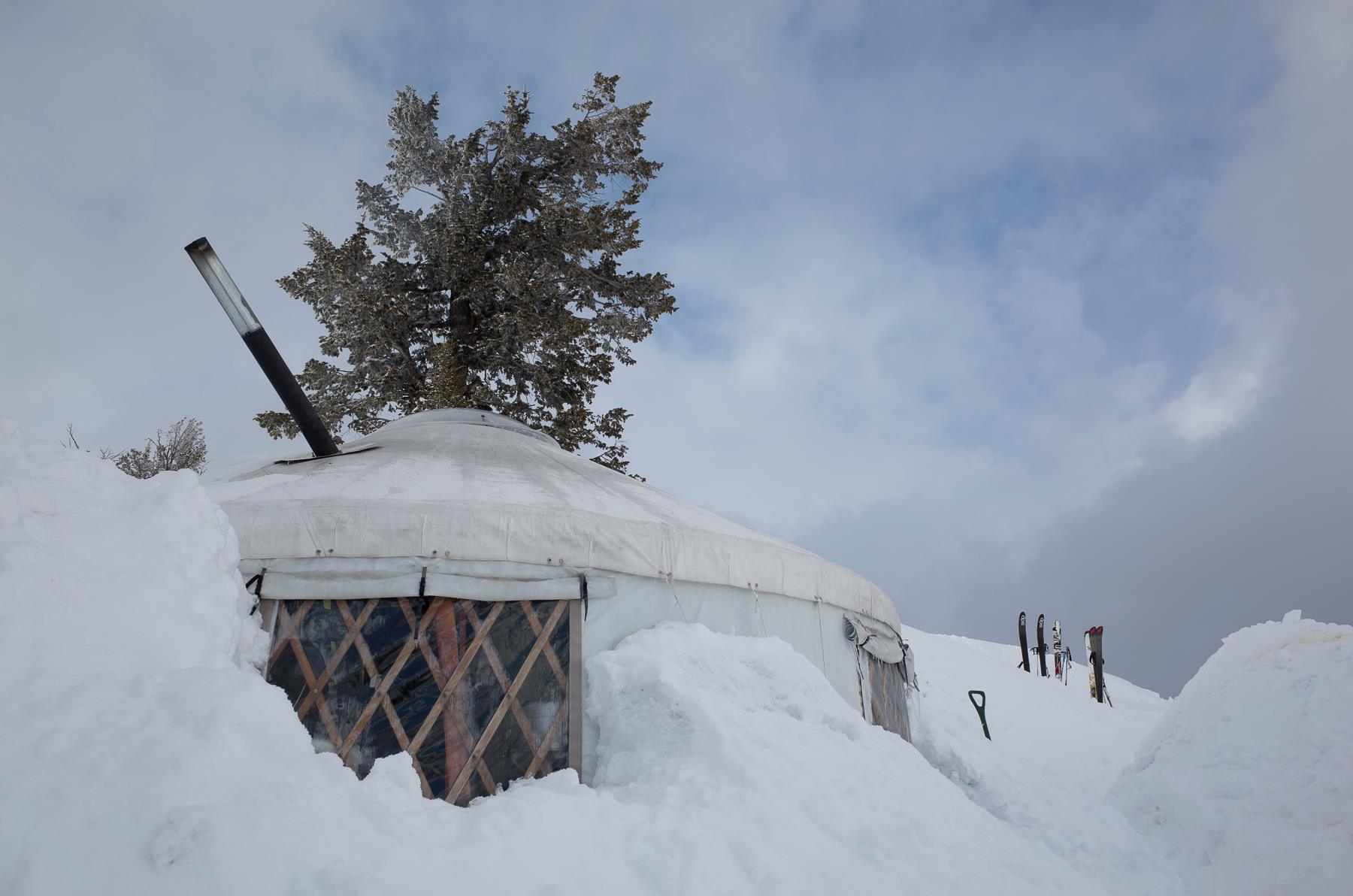 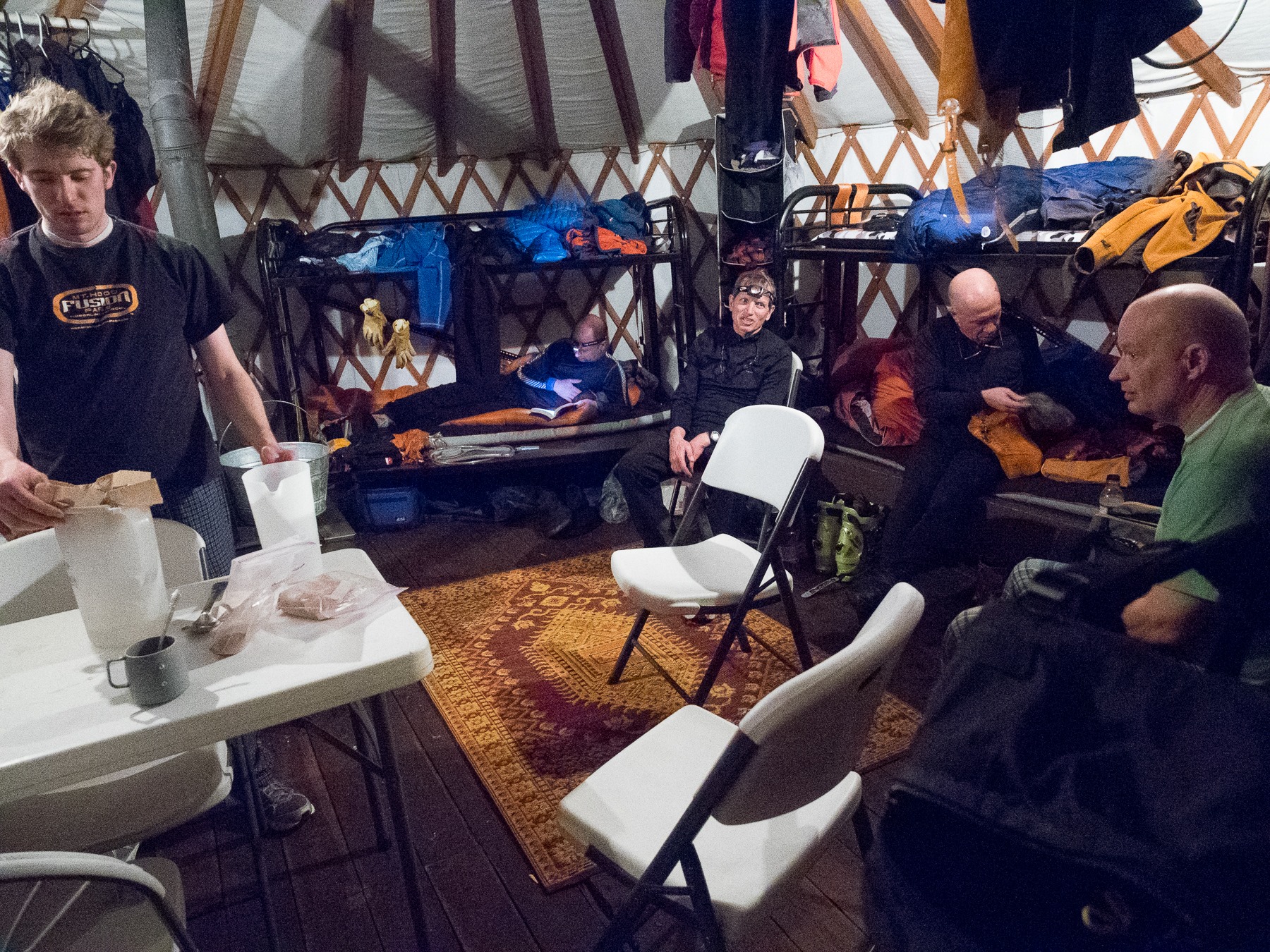 The next morning, we woke up to over two feet of fresh powder. We were pretty stoked. We spent the next three days trying to track out as much of it as possible. There was great skiing right next to the yurt, and we started with that. After lunch, we ventured a little further afield and skied the terrain on the South side of the ridge connecting the yurt with a peak labeled 10024 on the map, which is East of the yurt. 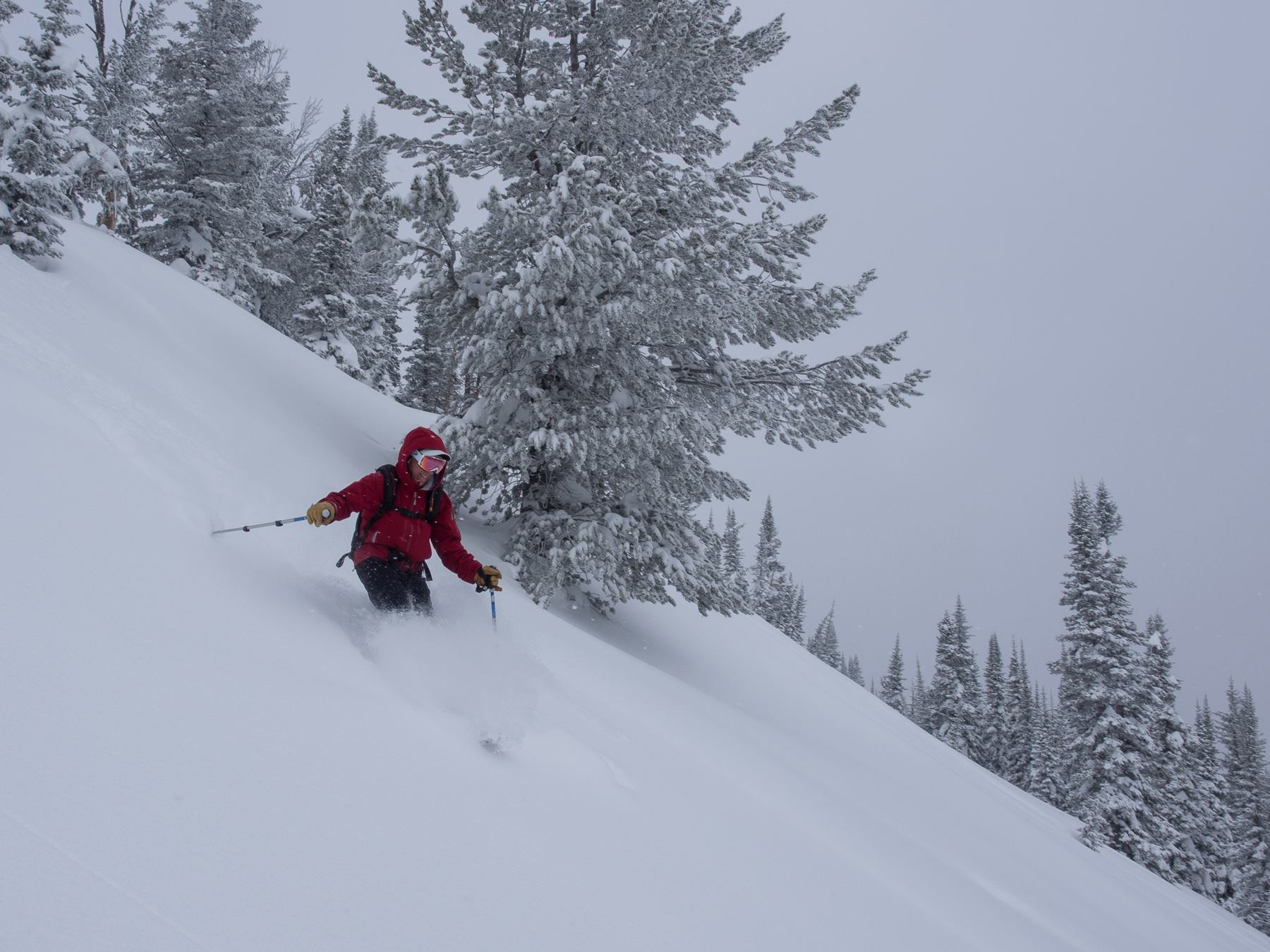 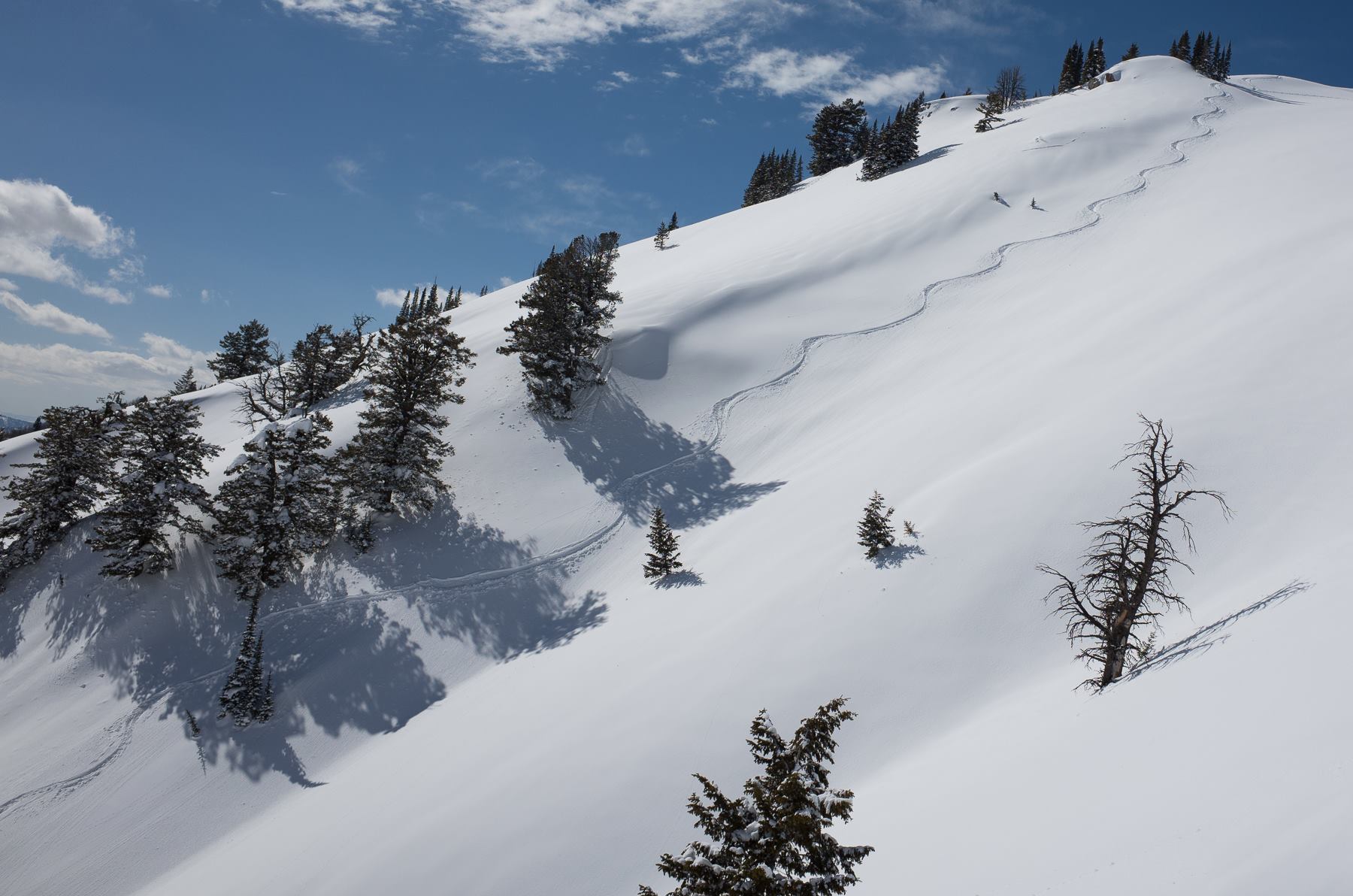 First Tracks.  South slope of the ridge connecting the yurt with Peak 10024

The snow was sublime, nice light powder. Definitely the best powder turns I’d had all season. When we were done skiing, we came back to the yurt and had dinner. The heavy loads we carried on the trip in paid off, as we were able to eat really well all week long. No freeze dried food on the whole trip. It was all fresh and tasty. 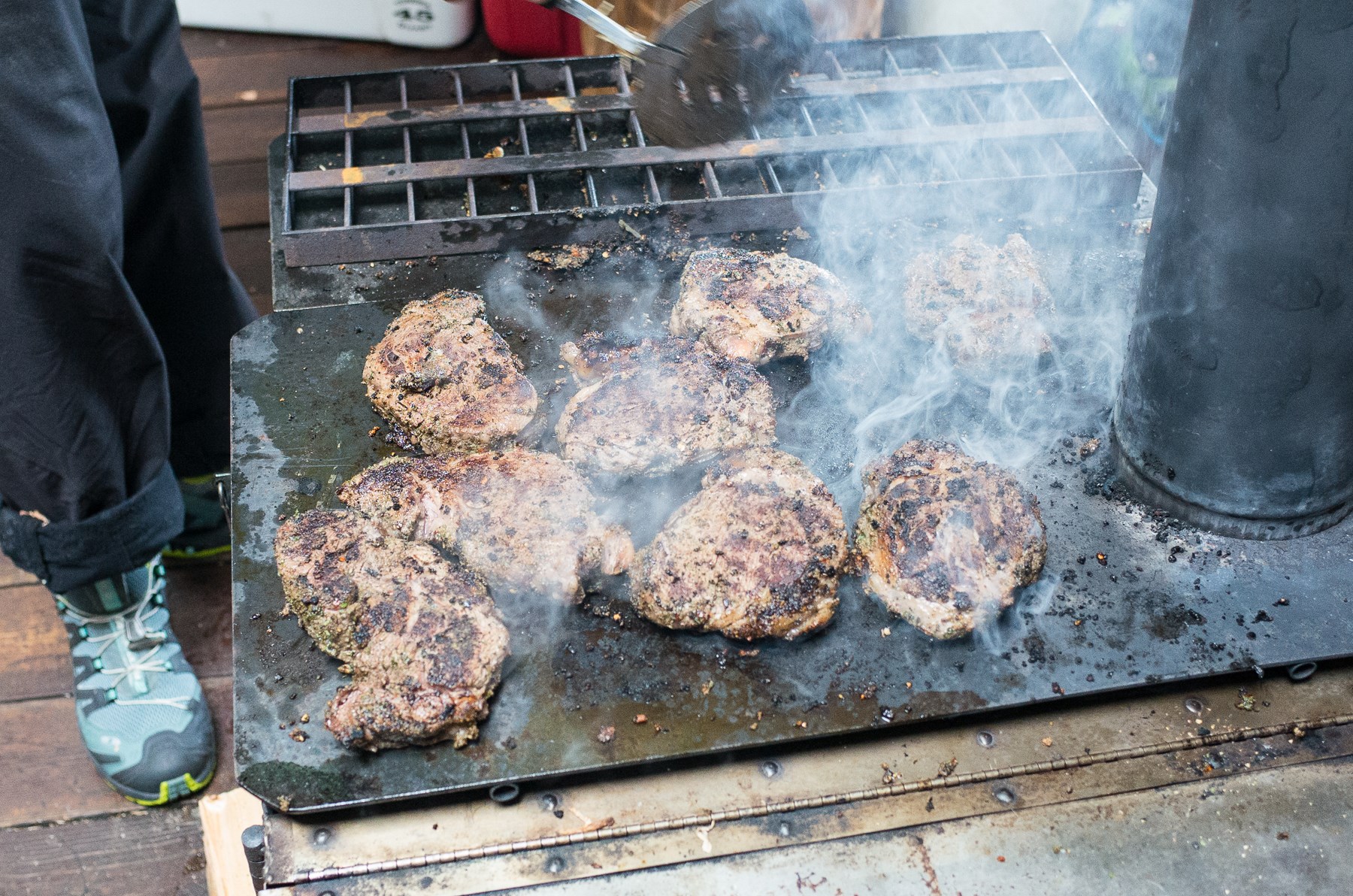 The third day, we skied up to the top of Peak 10024, and spent the day skiing Peak 10024 and the ridgeline just to the south, across the valley from Peak 10024. The snow continued to be amazing, and there were sections of full-on knee deep powder in the wind loaded pockets. It was too good to stop skiing for lunch, so we didn’t go back to the Yurt until evening. We were treated to a terrific sun set, and cooked another great dinner, then off to bed to rest up for the next day. 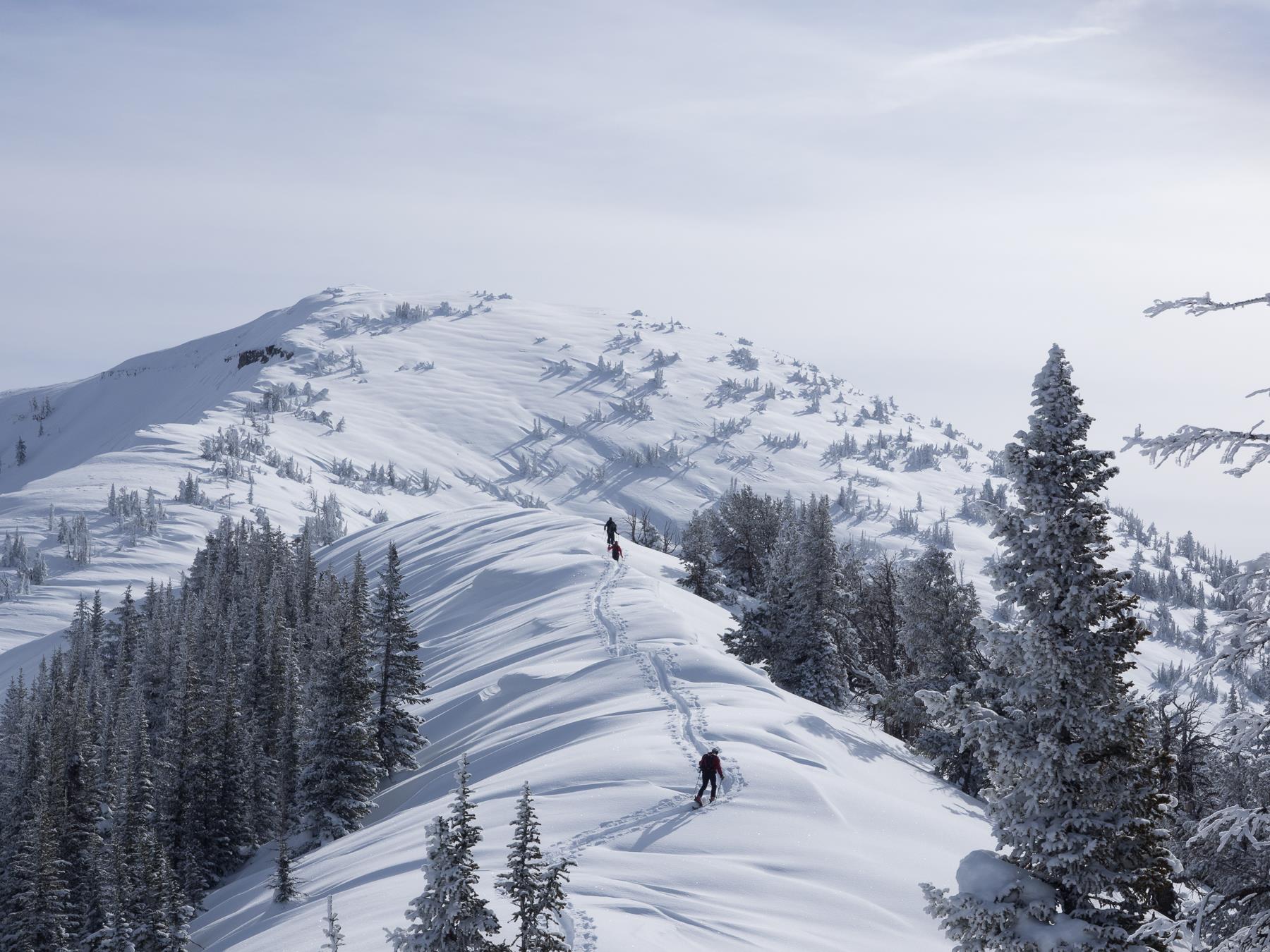 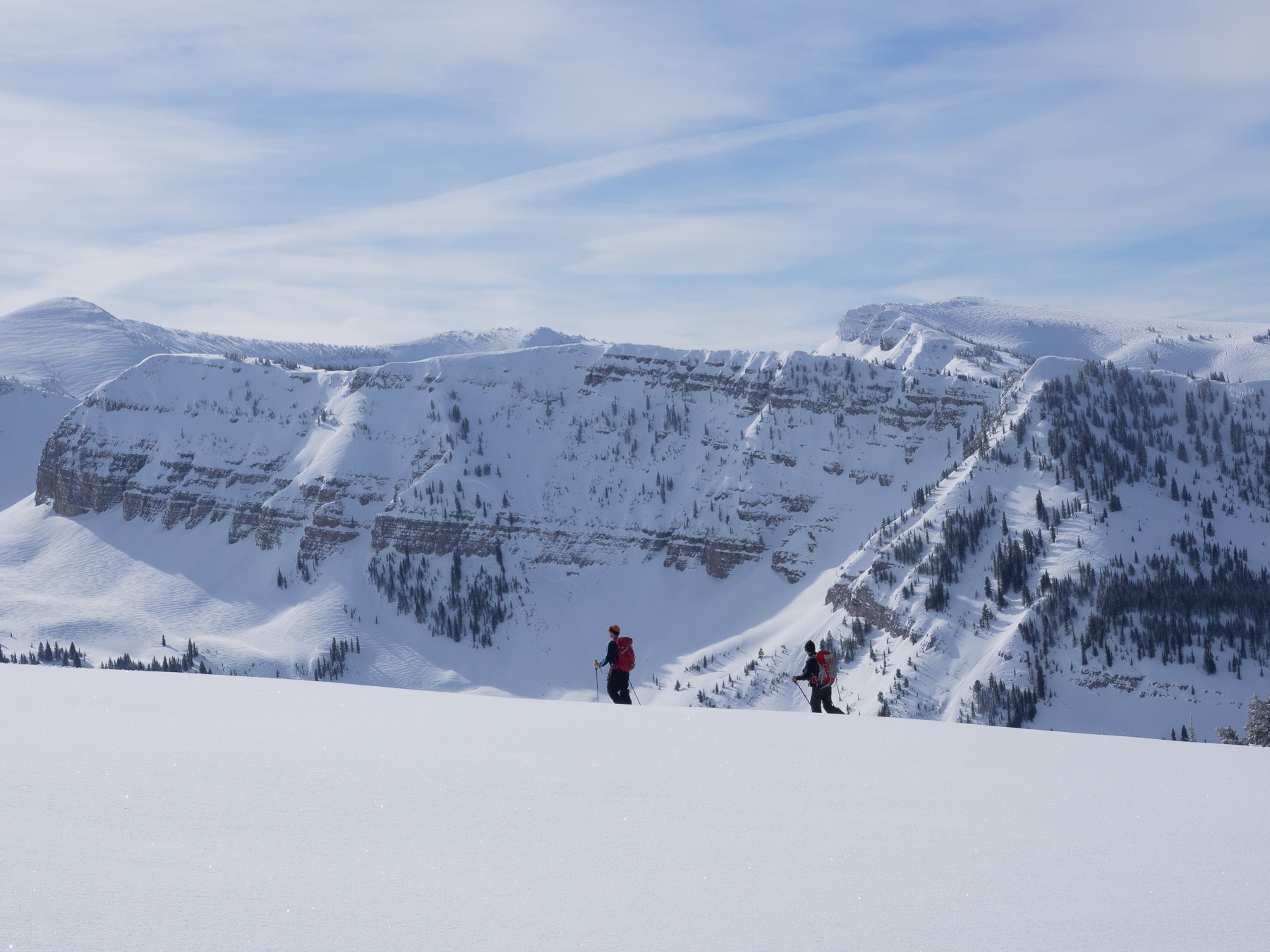 On the ridge that connects the Yurt to Peak 10024 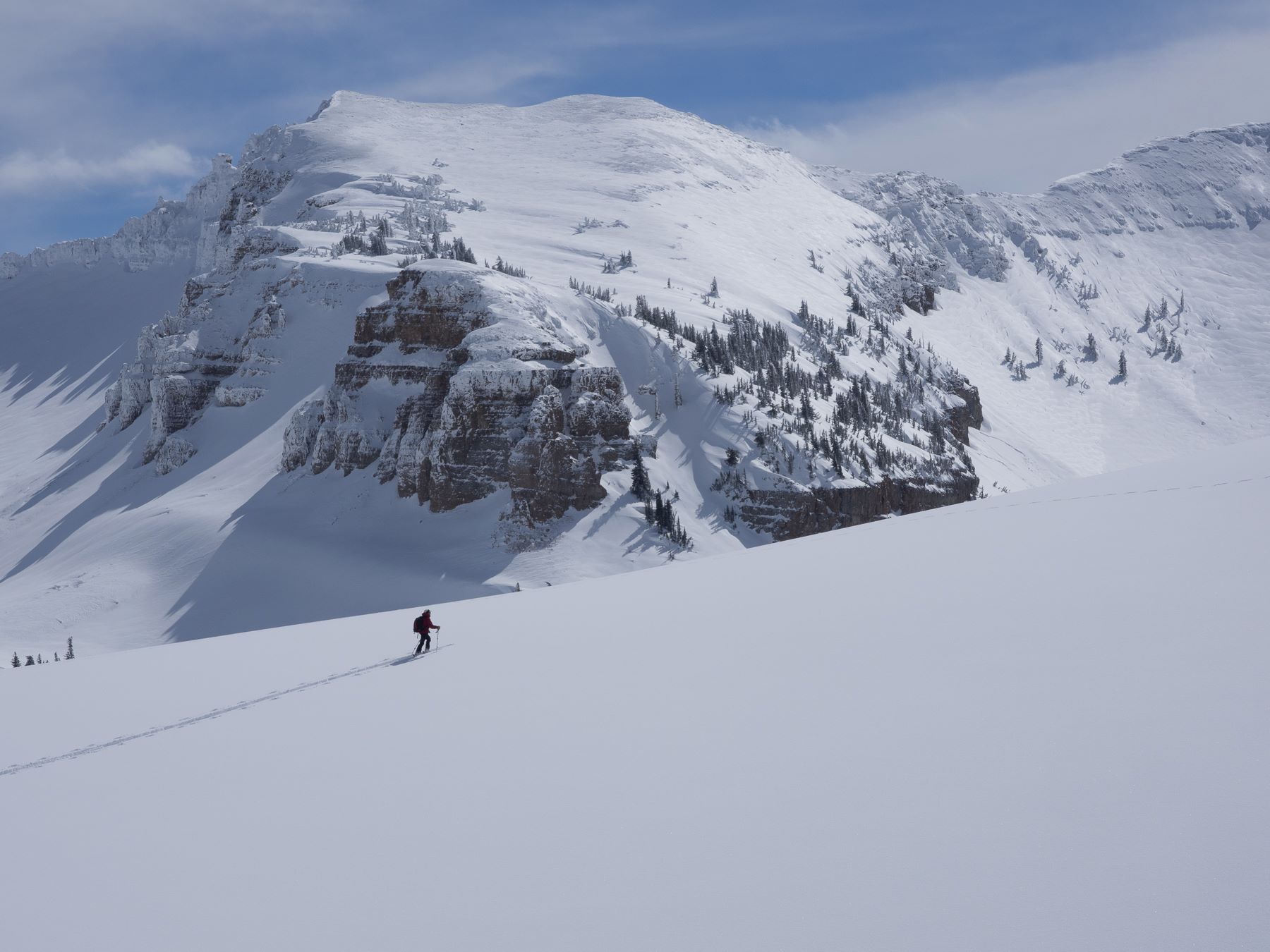 Skinning up to the ridgeline South of 10024 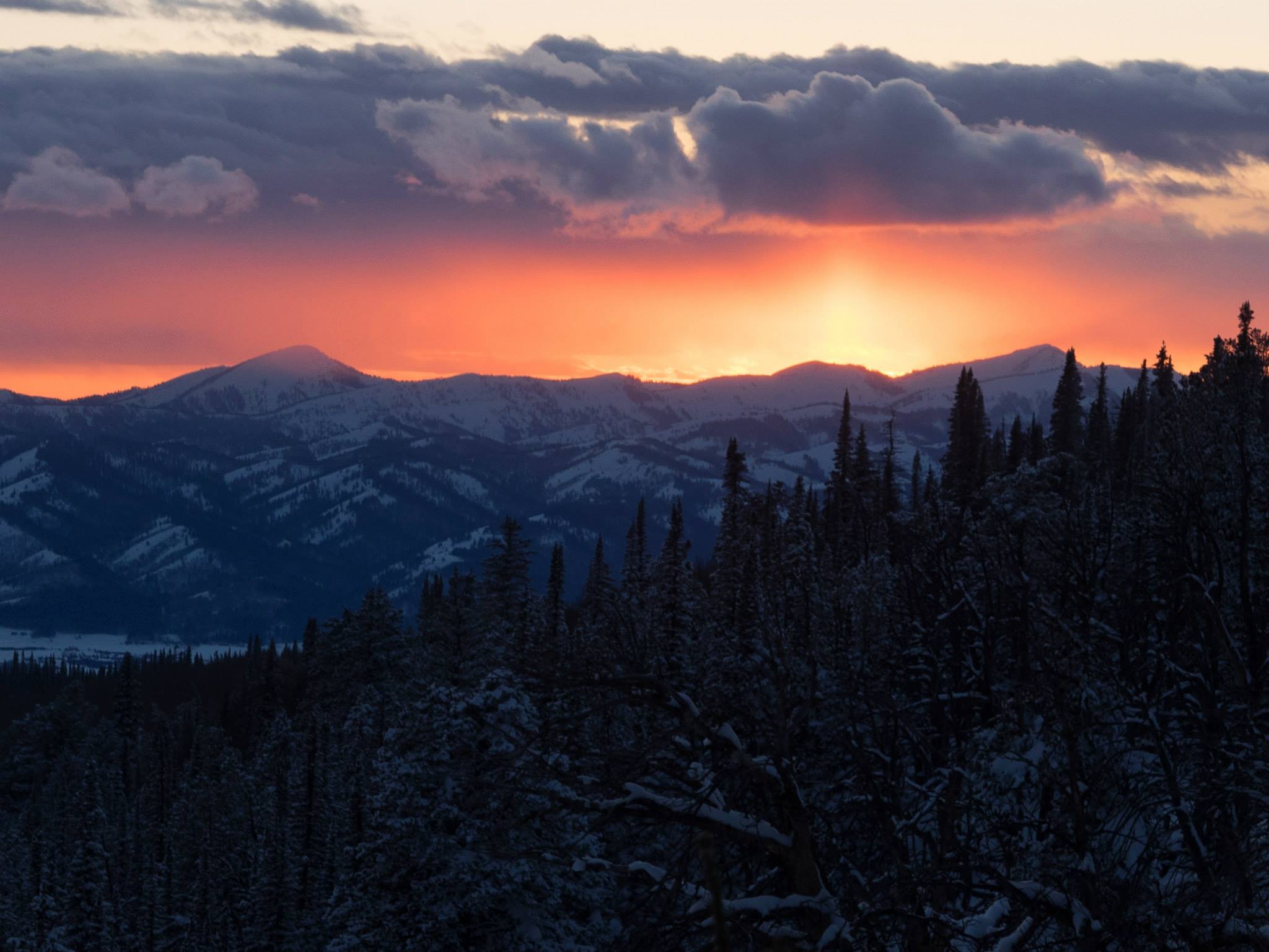 The bluebird sky and bright sunshine of the past day had begun to bake the South facing slopes, so we ended up skiing the North facing slopes right off of the ridge that leads to Peak 10024. The snow was not quite as light and fluffy as it had been, but it still was a lot of fun.

We opted to leave that afternoon rather than spend another night out in the Yurt, so we left that afternoon. It only took a little over an hour to get back to the car, which was much better than the 4+ hour approach on the way in.

Overall, it was a terrific experience. We had great weather, great snow, and a lot of great skiing. For anyone looking for a great backcountry yurt experience, I would highly recommend the Baldy Knoll Yurt. The yurt is comfortable, and the terrain it is close to is ideal for “earn your turns” backcountry powder skiing.