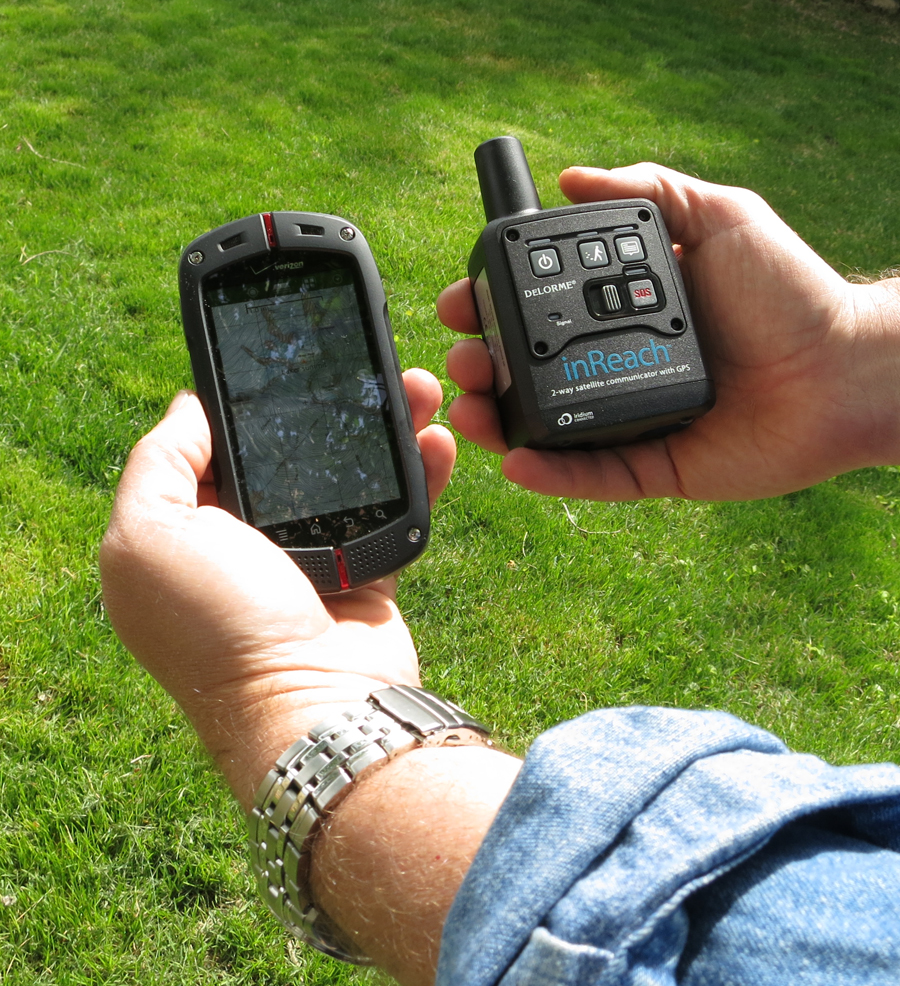 For many years, I didn’t even own a cell phone or a GPS.  I didn’t take a cell phone to work, much less into the backcountry.  Given the uncertainty over cell coverage, it didn’t seem worth the extra weight.  These days, however, I rarely go on an overnight trip without both a phone and my Delorme inReach.

First, the phone:   I’ve had the Casio Commando for about two years now.  That may seem unremarkable, but for me, that’s a long time.  I’ve destroyed a number of other smart phones prior to owning the Commando.  I tend to drop them, squish them, or drown them, or they just seem to die for no apparent reason.    The Casio Commando is different.  It’s waterproof, shock resistant, and built like a tank.  In spite of all the abuse I’ve dished out over the past two years, it’s still going strong.

The Commando is obviously useful as a phone (when you can get reception) but it has other uses as well.   First, and most importantly, it will run an Android application called Backcountry Navigator.  This app turns the phone into a full-featured GPS.  It has downloadable topographical maps that you can download ahead of time and store on the phone so that they are available when you don’t have cell service.  The app tracks your location on the map via gps, so you can see where you’re going.  You can create waypoints, measure distances, and do pretty much everything you’d otherwise do with a full featured gps.

The combination of phone and the Backcountry Navigator app are so easy to use that I don’t ever bother to bring along a standalone gps any more.  The only downside of using the phone as my gps is that battery life isn’t long enough to allow for it to be kept on all the time.  That’s not an issue for me, however, as I mostly navigate the old fashioned way with map and compass, and only use the phone’s gps capability for occasional reference checks or navigating in poor visibility.  I generally keep the phone turned off, and only turn it on when needed, so the batteries don’t get drained, even on multi-day trips.

The other electronic gadget that I’ve started to carry is the Delorme inReach satellite communicator.   It is a device that  allows you to send text messages via satellite, so you can communicate with folks back home even if you’re out of cell phone range.  The inReach allows you to pre-configure three text messages and generate a list of people to send them to.  The recipients can be contacted by e-mail and/or by phone text message.

I have created three “canned” messages.  The first says “Everything’s OK”  The second says “I’m running late, but everything is ok.”  The third says, “I’m stuck, don’t know when I will be able to get back, but I don’t need you to call for help yet.”      There is a fourth option that sends out an SOS message both to my listed recipients and the local search and rescue and emergency services.    All of these messages are accompanied by gps data and a map that shows where you were located when you sent the message.

Here is an example of what the message looks like.

In addition to these pre-set messages, the inReach will also pair with my Android phone via Bluetooth and when paired, I can use my phone to compose and send any messages I want to.  This is a nice option in case you need to provide more specific information than is contained in the pre-set canned messages.  With the phone connected, I can receive reply messages too, so full two-way communication is possible via satellite text messaging.

So, why do I love the inReach?  The short answer is that it makes my wife happy.  Whenever I go out into the backcountry, she worries.  She doesn’t worry a lot, but the longer I’m gone, the more she worries.  If I’m late coming back and she hasn’t heard from me, she worries more.   The inReach gives me a very easy way to send occasional reassuring messages home that I’m ok and all is well.  This keeps my wife from worrying, and makes it easier on both of us when I’m on a trip.  If I’m running late, I can let her know that I’m just late, and not dead.

In addition to the role of keeping my wife informed on my status and whereabouts, it’s nice to have a dependable method of signalling for help in the event of an emergency.  If I’m deep in the backcountry, a satellite communicator is often the only practical means of alerting anyone to an emergency situation.  Having the ability to call for help provides me with a little more peace of mind and raises my chances of getting rescued if I am injured and unable to self rescue.

After about 5 months of use, I really don’t have any complaints about the inReach.  It works  like it’s supposed to.  It’s reasonably small and doesn’t weigh too much.  Overall, I think it’s a very useful and well thought out piece of gear.

Cost of the inReach was about $250 for the device itself.  In addition, you have to pay a monthly subscription fee for the satellite service.  Subscription fees vary according to how much usage you need.  I have the basic one that costs $9 per month.  For my needs, that’s all that’s necessary.  If you’re using your inReach to constantly update your social media accounts with text messages from your latest adventures, you’ll likely want one of the more expensive subscription options.

One thought on “Phone, GPS, and Emergency Beacon”