After climbing in the Bugaboos, we decided to head back down to the U.S. in search of good weather and good climbing.   We ended up at Washington Pass.

Our first objective was Burgundy Spire.  We decided to climb it via the West Ridge of Paisano Pinnacle, which is a 5.9 variation that adds 7 or 8 pitches to the regular Burgundy Spire North Face route.   We started hiking at about 6:30.  The approach was long and steep, and ended with a bunch of scrambling over nasty loose gravely ledges. I was glad when the approach finally ended, and we got to start climbing.

The climbing was a lot of fun, with excellent granite, clean cracks, and good friction.  From the top of Paisano Pinnacle, we traversed a bit over to the regular North Face, and headed up that. 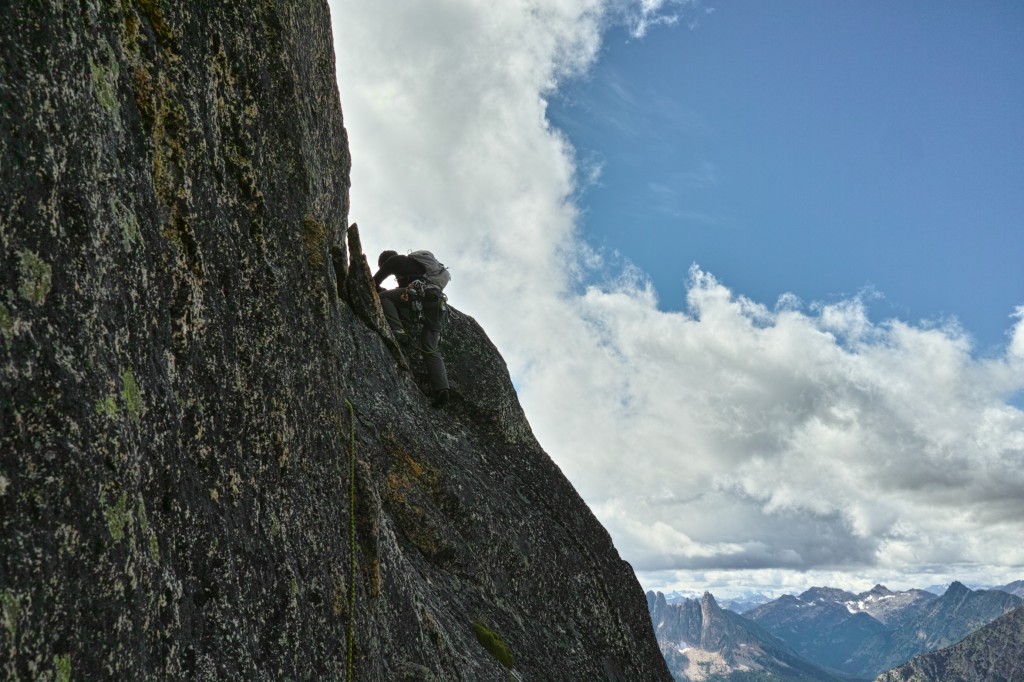 On Paisano Pinnacle, with the Early Winters Spires in the Background

The North Face route started out kind of slabby, but steepened up as we got higher.  At one point a bit past midway, we had to traverse right and go through a big tunnel formed by a balanced rock slab.  By the time we’d reached the top, I was pretty tired, and was happy that the descent was pretty much straightforward rappels. 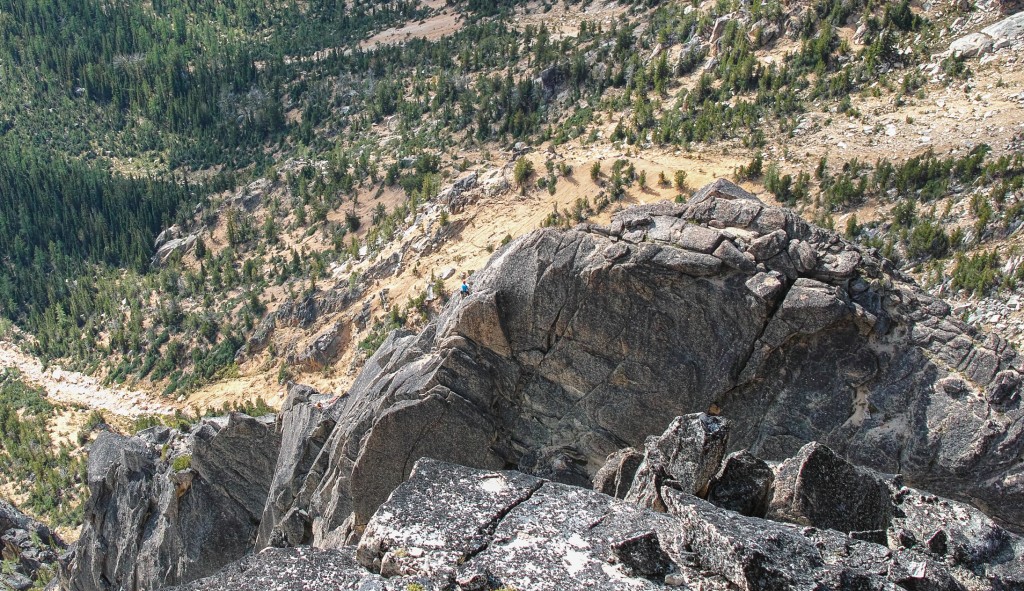 Paisano Pinnacle.  Climbers can be seen on the friction pitch near the top of the route. 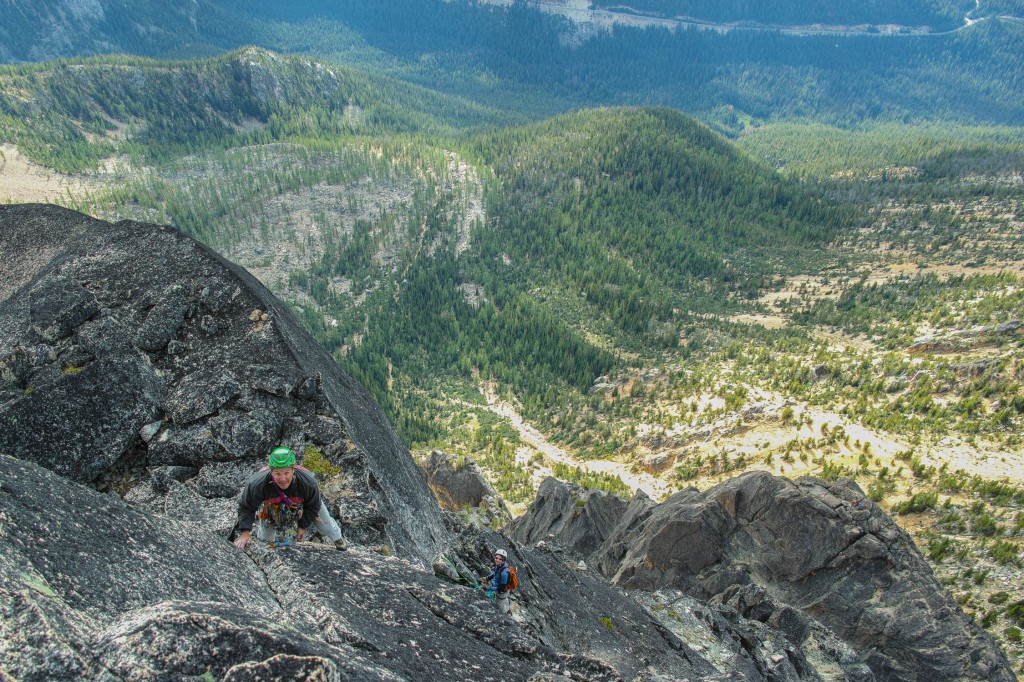 Climbers on the final pitch of Burgundy Spire. Look Closely, and you can see climbers topping out on Paisano Pinnacle far below. 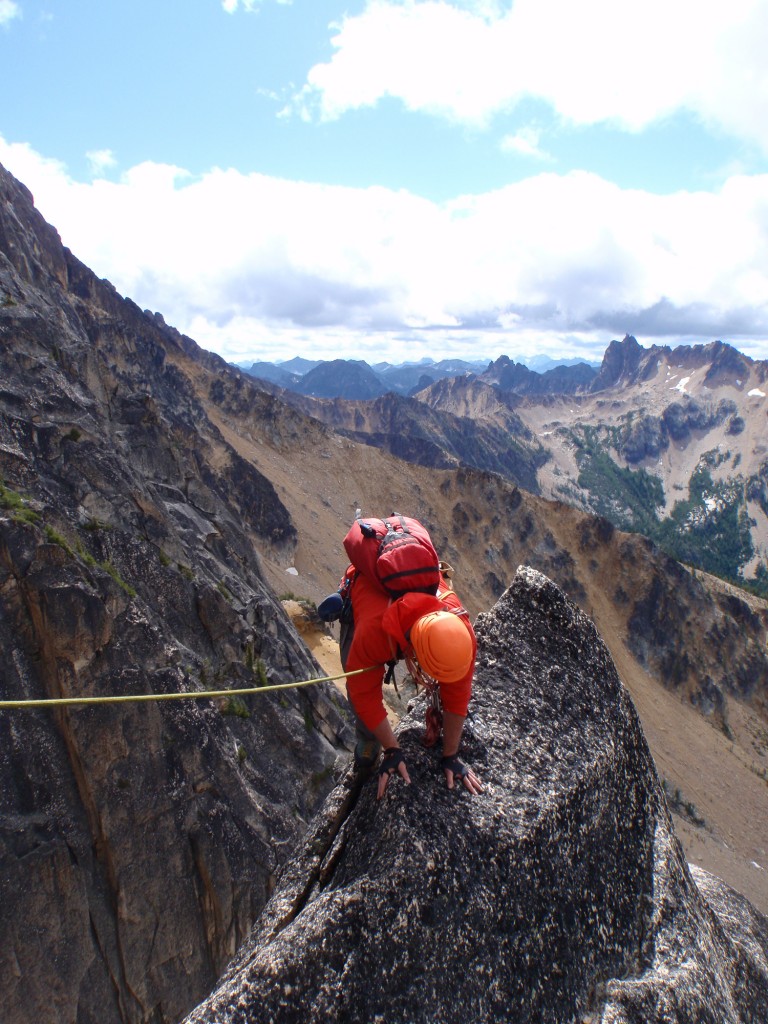 The hike out was uneventful, and we finished the final bit of the hike in the dark.  I was glad I had brought my emergency headlamp (a Petzl E-Lite) in my first aid kit.  All in all, it had been a pretty long day, and I was tired.  We ate trail food for dinner, and slept on a pull-out camp spot on some forest service land outside of Mazama.  The next day, we rested and took it easy at a hotel with a hot tub. 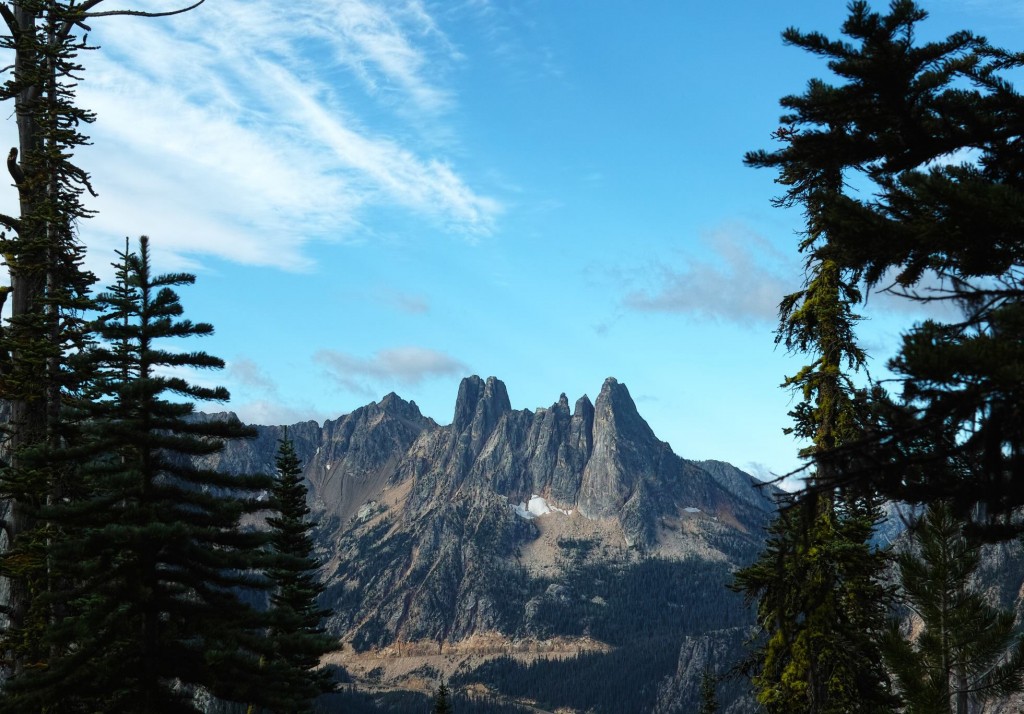 After a day of rest and relaxation, our next objective was the Early Winters Spires group.  The plan was to do a traverse, starting with Liberty Bell, and working our way across the spires, up and down each one of them. 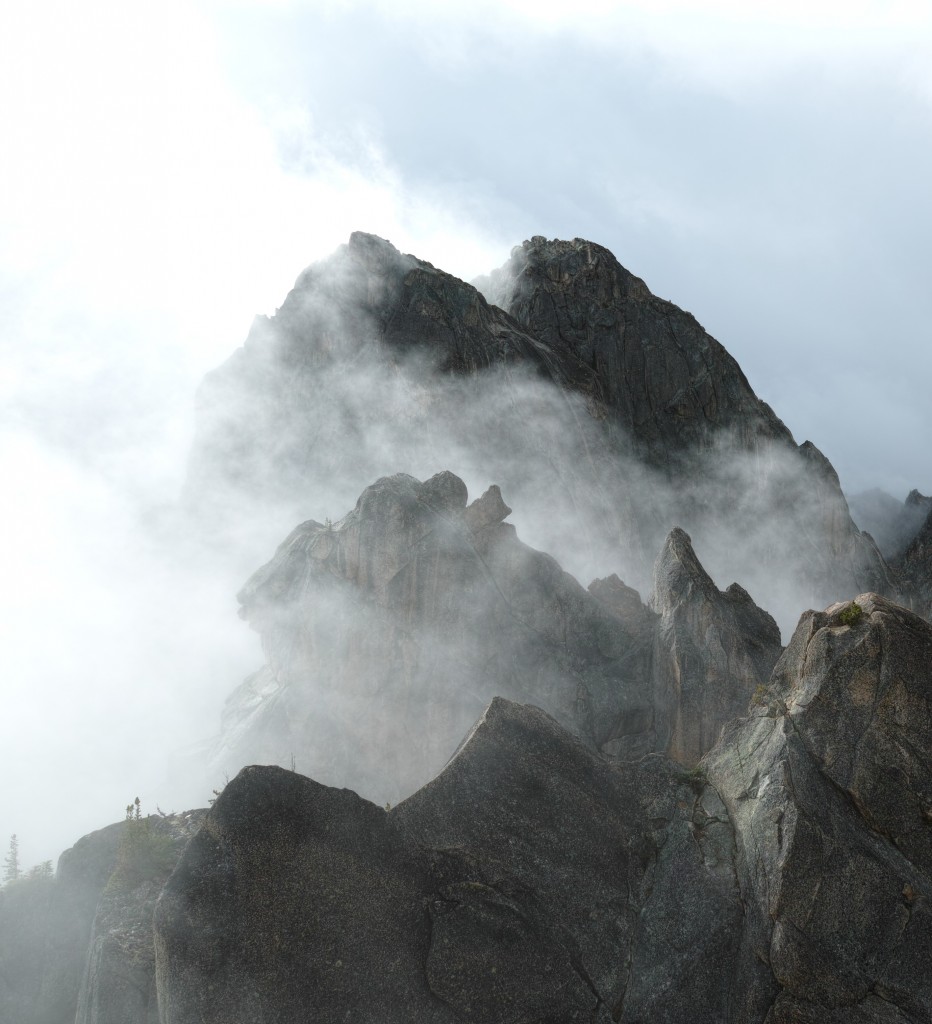 Clouds and mist over the Early Winter Spires

The morning was cool, with mist, clouds, and light rain.  We were alone as we began the approach up to Liberty Bell, which is pretty unusual because Liberty Bell is one of the more popular peaks in the Cascades, and we were climbing on a Saturday, on Labor Day weekend.  The climbing was pretty straighforward, but I was struggling with it much more than I should have.  I realized that I was getting pretty worn out from my week of climbing.  By the time we reached the top of Liberty Bell, I’d pretty much decided that I didn’t have the traverse in me, and would be happy to call it quits with just the Liberty Bell summit. 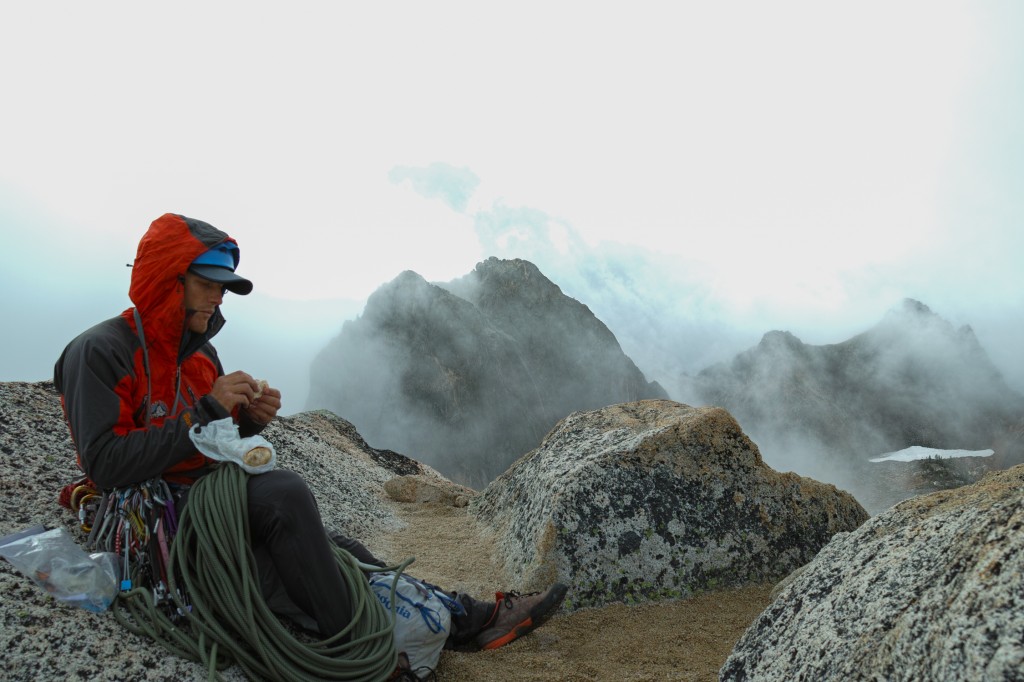 Chad, channeling his inner French Guide, munching on a baguette and cheese on top of Liberty Bell

We rappelled down Liberty Bell in intermittent rain, and then made our way down the trail.  In spite of ever improving weather, I was happy with my decision to call it a day after tagging the Liberty Bell summit.  It had been a good day, and I was pretty much done with climbing for a while.  On the way down, we saw lots of people headed up to climb in the spires, and we also ran into a family of mountain goats, who were not at all afraid of us. 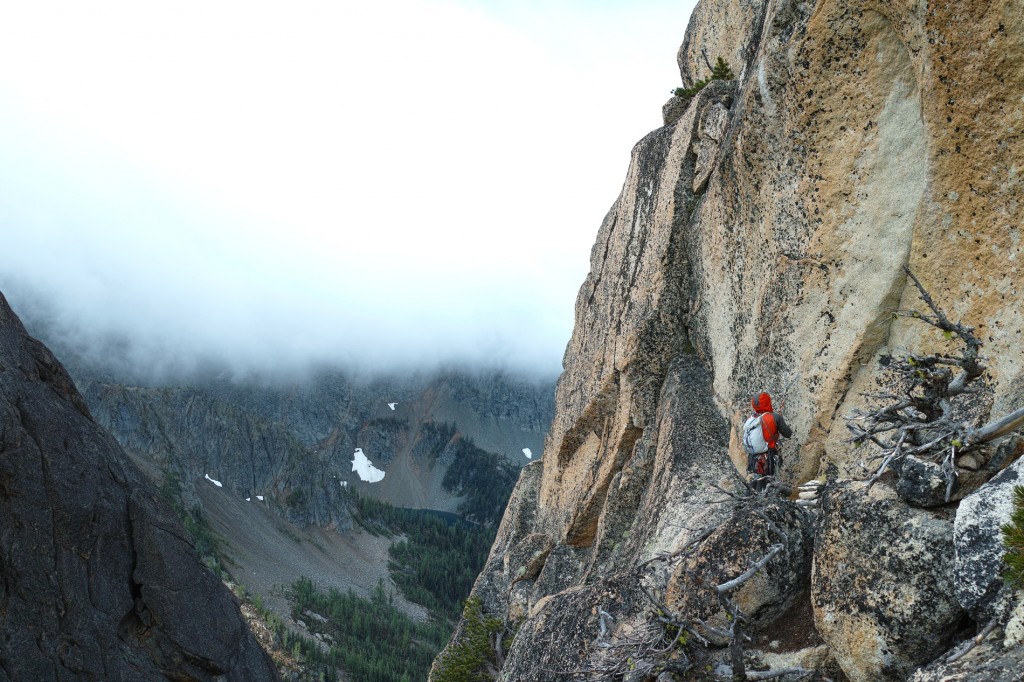 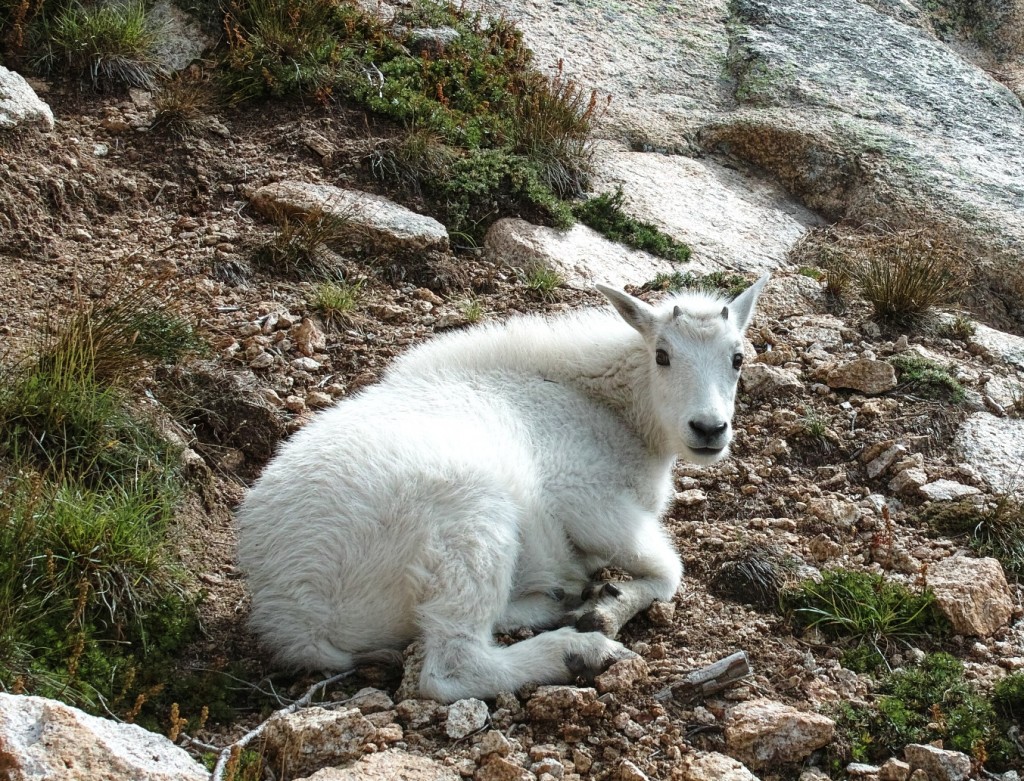 We drove back to Bellingham, I dropped Chad off at his home, and then caught an early flight out of Seattle back to Salt Lake.

The trip had been a real success.  Between the Bugaboos and Washington Pass, I had climbed over 40 pitches of beautiful alpine granite.  I was tired, but happy, and already dreaming about what to do as an encore next year.